I guess it’s a testament to how much I like Kristen that no matter how many times they try to tell me that she killed Orson, I still can’t quite believe it. Even when they show it, or at least, show him crawling away from her, I’m like, hmmm, no.

Whether she did kill him or not, she’s clearly haunted by the murder. This week, though, she doesn’t have much time to dwell on it. They have a new case. 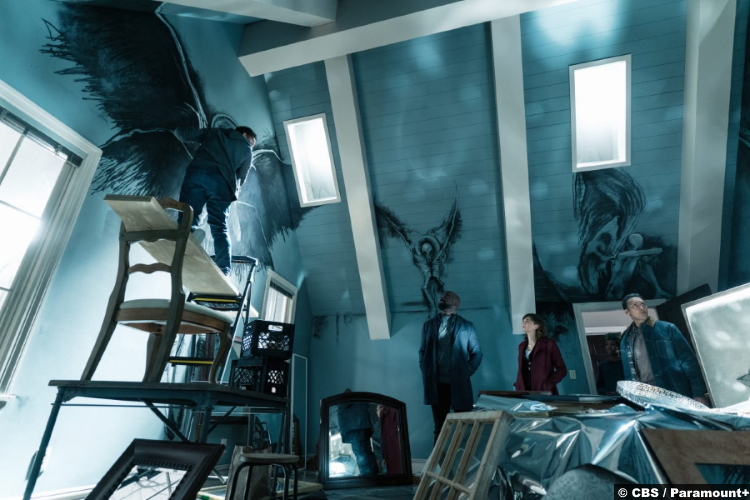 The assessors meet Raymond Strand (Brandon Dirden), whose wife is, to say the least, concerned. She has reason to be. The case, incidentally, is somewhat unusual for the assessors. Brandon believes that he’s possessed, yes, but possessed by an angel. The archangel Michael, to be specific. (By the way, if you saw Raymond and were like, where do I know that guy from? The answer is (probably) The Americans. He was Dennis, the agent who works with Stan.)

Now, being possessed by an angel might not seem that bad. Then you remember, as Kristen does, the angel cameos in the Bible, and are like, oh, yeah. Angels are terrifying. They’re not the cuddly, chubbo little cherubs we might first think of. In fact, the Biblical descriptions of their appearance are unsettling at best, like whatever’s going on in Ezekiel. (Wheels?) The character Brandon draws (and that David later sees at home) are at least humanoid, but they’re not comforting.

Anyway, as such, the kinds of things that Brandon feels compelled to do are also uncomfortable. Sure, it starts with little things, like giving to the poor and volunteering. Those are good things, right? But then he believes that the angel wants him to go further. This angelic voice wants Brandon and his wife to live Biblically. Uh-huh.

Now this is not a new thing, of course, and at least one person has tried to do it. But that person was a man. Many (most?) of the women in the Bible, on the other hand, didn’t have a very fun, sexy time. Brandon’s pregnant wife, Ashley (Joniece Abbott-Pratt), therefore, isn’t looking forward to their new Biblical life. She’s also concerned about Brandon in general.

And again, she has reason to be. Because while it seems impressive and moving at first that Brandon saved a family from a burning car, things quickly turn. A detective tells Kristen, for instance, that surveillance footage shows that Brandon apparently let one of the family members burn for a literal minute before he saved him. When they confront Brandon, he admits it.

He says that the uncle was preying on his niece. Now he’s not only been given a taste of hellfire, but he’s also too injured to ever abuse his niece again. Uhhhhhhh. I understand that others might be tempted to do the same thing. However, that’s not really our job to do. Like, what if everyone took upon themselves to be angelic vigilantes? Life would be chaos. 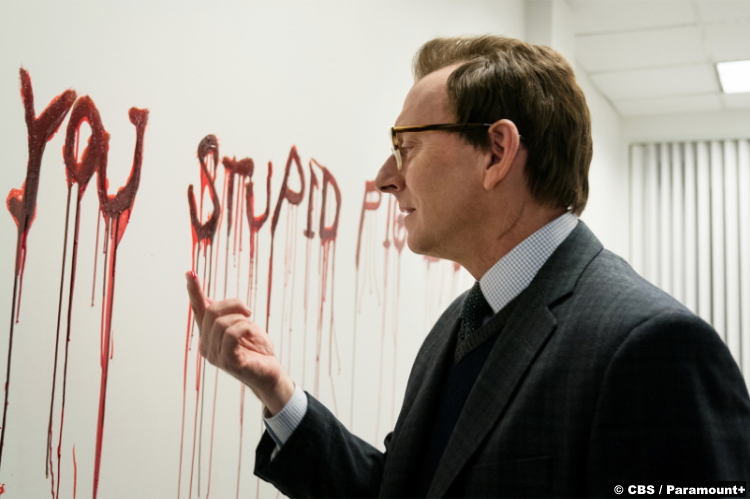 Meanwhile, while all of this is going on, Leland dumps Sheryl. He tells her that she was only a means to an end, and now that he’s reached that point–hurting Kristen–he no longer needs Sheryl. If he expected her to roll over and cry or whatever, though, then he’s wrong. Although she’s stunned in the moment, she later slaps the taste out of his mouth before telling him that he’s not the only demon she’s ever dated. Well, okay, then.

What sets Leland off to break up with her, by the way, is the news that they’re going to have to postpone his exorcism. It’s nothing to do with him, really–the exorcist is apparently in high demand. Wait, I need to know more about that, though. He’ll later wheedle his way into giving a confession to David, despite the fact that David isn’t actually a real-live priest yet. That doesn’t matter to Leland, of course, because he’s doing it only to torment David about Julia. It works, but not outwardly. David keeps his cool around Leland. 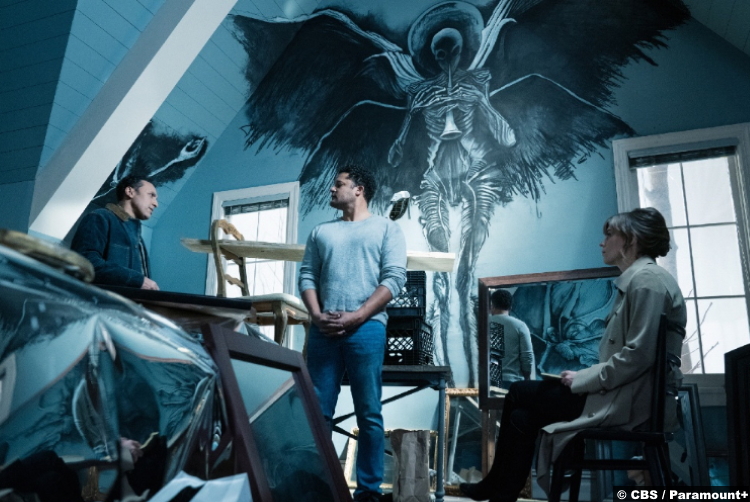 And that’s a good thing, because it looks like other things might be heating up. Although they’ve discussed the possibility that Raymond’s angelic movement might have been caused by the scopolamine patches he uses at work, that doesn’t make it any better. They also know that Ashley might leave him, which would further exacerbate his psychosis. So, they decide to pay the Strands a visit.

However, once they get there, they can’t find Ashley. There’s just a pile of salt and Raymond’s claim that Ashley “turned away.” You know, like Lot’s wife. Oh, my. And on the heels of Raymond’s news that “God’s penance” is coming, David sees a news story about a mysterious new outbreak. Good thing he’s now got a nun, Sister Andrea (the great Andrea Martin), on his side.

8/10 – Evil is so good at crafting their case-of-the-week stories that it’s sometimes easy to forget the ongoing storyline. Introducing the intriguing new character of Sister Andrea, who sure seems to know a lot of stuff, helps make it stand out.