Sure, this episode ends with Archie and Jug in serious danger, while Alice, Betty, and Kevin are finding a body. At the same time, though, Veronica married a man who says “awesome sauce,” so who really has it the worst?

I guess in all the excitement, I missed the small detail that all of the core four would be going back to Riverdale High to teach. Sure, why not? 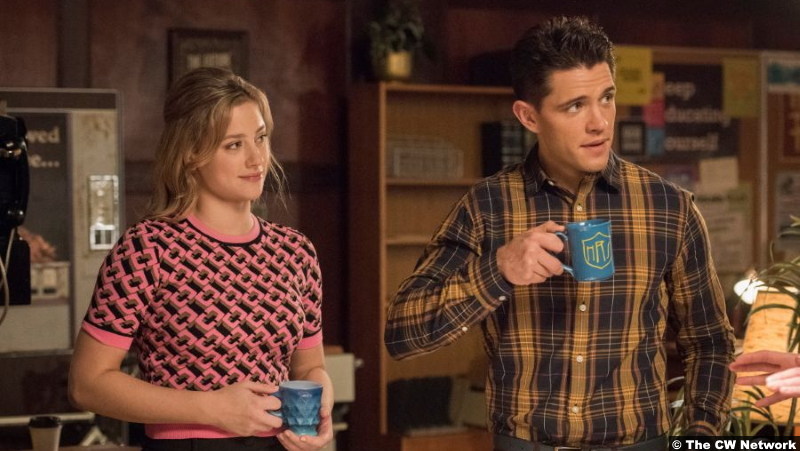 So they swallow their first-day-of-school nervousness in service of saving the high school. Archie, of course, is there to head the RROTC. On that note, I’m a little confused that his shirt reads “RIVERDALE RROTC.” I thought the extra R was for Riverdale, so is it the Riverdale Riverdale Reserve Officers’ Training Corps? I don’t know–probably.

But training the next generation soldier isn’t the only plate he’s spinning. He wants to restart the Bulldogs football team, especially after some Stonewall Prep players–more minions of Hiram’s–start a fire inside Riverdale High. He manages to put together a team, but fumbles–football term–when it comes to squeezing more money out of Cheryl. Ms. Blossom’s had to resort to art forgery since funding the school drained her coffers, so, uh, why did she give them all her money? 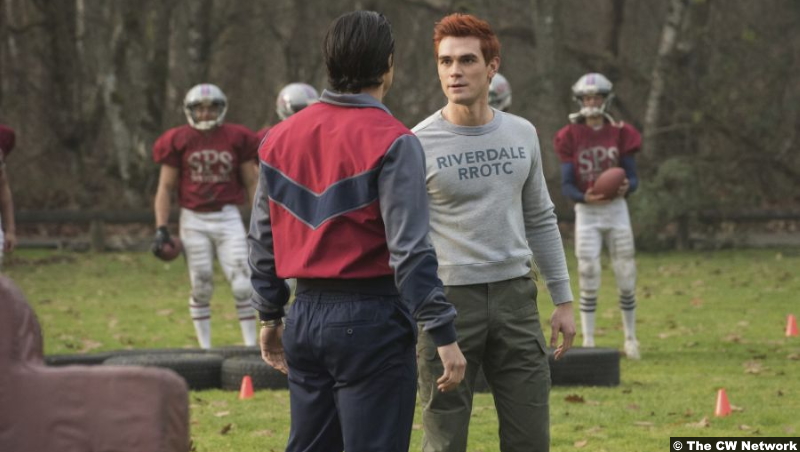 Anyway, Veronica, RHS’s new economics (?) teacher ponies up the 10k the Bulldogs need to be a real-live team. In an irrelevant (at this point) side plot, her doing that leads to the likely dissolution of her marriage to Mr. Awesome Sauce. It’ll probably be relevant in the future, once she starts sniffing around Archie again, but at the moment, it’s basically just…bye!

I mean, Veronica never really seemed that into him in the first place. And since her return to Riverdale, where’s she started making plans to open a jewelry store there, it’s felt like she couldn’t be bothered to keep up even the slightest pretense. The minute he stepped out of line (in her eyes), she was done.

But what is she going to think when she finds out about Archiekins and Elizabeth Cooper? For her part, Betty’s joined the faculty to teach auto shop. At first, her students seem more interested in the fact that she’s the Black Hood’s daughter. Her choice to tell them that he’s the one who taught her about cars is a little weird, is it not? Like, why are we humanizing the serial killer?

Maybe I just need to look at it from another perspective. After all, when we saw that shot of Polly running down the highway last week, it sure seemed like she was a goner. However, when Betty goes looking, she finds out that Polly’s been meeting up with dudes she finds on…do I have to say this? Okay. On Nedd’s List.

When Betty and Kevin trick–I have to say this, too?–TruckerBoy69 (nice) into meeting up, he says that when he last left Polly, she was alive. Not fine, mind you, but alive. They met up to do some jingle jangle. (The words I have to say for this show.) All of a sudden, though, Polly flipped out. She jumped from the truck and then booked it down the highway.

They trace her phone to the swamps, where they’re hoping the phone has enough power left to ring when they call. It’s Kevin who finds it first. Not the phone, though. Instead, he finds a body, buried so that only a hand and a forearm are uncovered. We end the episode without finding out whether or not it’s Polly. 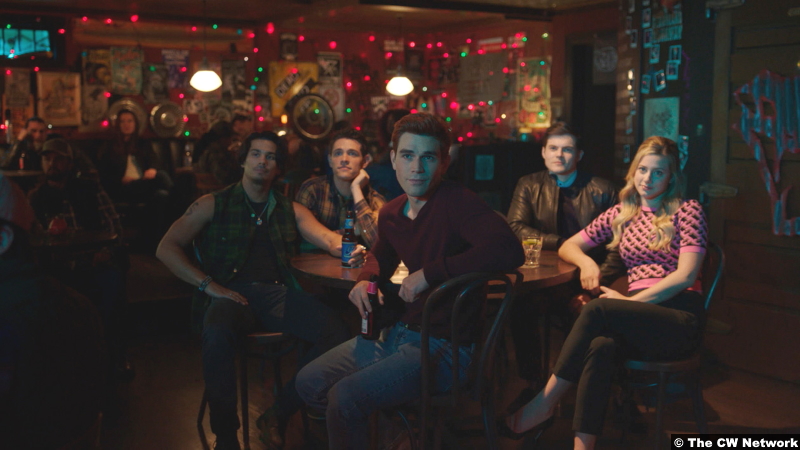 But that’s not the actual end of the episode. Before we get to that, we should talk about Jughead’s weird plotline. He’s now teaching English at the high school, while still working as a server at Pop’s. Tabitha, finding out that Jughead’s trying to write about Riverdale, sets him up with an Old Man Dreyfus, whom she says has got an interesting tale. After Jughead ventures out to the man’s isolated home, Dreyfus tells him about his coworkers, who were abducted and then returned by a Mothman. Or Mothmen. I don’t know where they’re going with this storyline, but I’m sure it’ll be bananas.

Anyway, now that Archie’s cleared out the Ghoulies, he’s living in his old house, where he’s invited Jughead to stay. As the episode ends, though, they have a major problem. Someone’s set fires outside both the front and back doors. It’s probably Hiram’s doing, but that doesn’t matter right this second. What matters is, they’re trapped, and that’s all we know until the show returns in two weeks.

7.5/10 – I don’t really know what to say about this episode as a whole. It was fine? Obviously, there’s stuff I didn’t get to mention, like Toni’s plan to lure Cheryl out of her fortress of solitude. Or the question I have regarding whether or not they’re going to cast the twins. It would be so weird yet funny if they just kept referring to them, but never ever showed them. So basically, it would be very Riverdale.