Sometimes a movie just falls through the cracks.

Hollywood is filled with examples of high concept movies with solid budgets, good casts, clever writing, and a finished product that should have produced a hit. Instead, no one saw it opening weekend, no word of mouth helped it recover from the rocky start, and no one made it a big seller on home video. And then there are those movies that were never going to be flashy, were never going to dominate a holiday weekend, and were never going to enjoy a big ad campaign, but they were well made. They were Oscar contenders, or at least were supposed to be. They were showcases for actors, directors, and screenwriters. All those movies needed was a little notoriety, a little buzz, and they’d be off to the races. Instead they just sort of limped along, coming and going from theaters without much fanfare and were mostly getting ignored come awards time.

Let’s hold that thought and come back to it.

Sometimes an actor just goes off the rails.

This is much more common, or maybe it’s just more high profile and obvious when it happens. An actor or actress will be the hottest thing going for a few years, scooping up awards, big roles, sweet deals and more, then just as quick as it came, it’s over. Actors like Tom Cruise are one in a million, who can remain not only at the top of the marquee for so many years (decades, even) but can withstand a few stinkers along the way and just keep chugging along. What usually happens is an actor or actress finds success, Hollywood—ever the land of copycats—starts getting into bidding wars for their services, and they oversaturate the market with their face. But then a few stinkers are released and, boom, the phone stops ringing; Hollywood moves on to the next new it-thing.

Blow is a movie I’ve long had an appreciation for, and Johnny Depp was, once upon a time, my favorite actor. 2001 was before Pirates of the Caribbean, before Charlie and the Chocolate Factory, and before Alice in Wonderland. In the decade leading up to Blow, Johnny Depp made Edward Scissorhands, Ed Wood, What’s Eating Gilbert Grape, and Fear and Loathing in Las Vegas. He was known as an actor willing to dance between serious, or experimental films, and more genre-oriented lighter fare like Sleepy Hollow or Nightmare on Elm Street. In the decade that followed Blow, Johnny Depp made Secret Window, Charlie and the Chocolate Factory, and The Tourist. There was still a bit of a mix between the genre-movies and the more serious stuff, but the scales were far from level and the overall quality took a nosedive.

I didn’t even mention the monster-sized trilogy of Disney movies he made in that stretch. 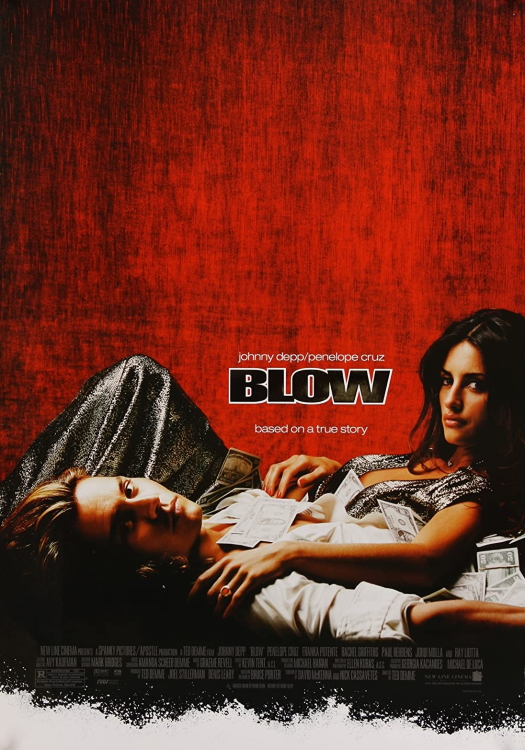 It’s now been twenty years since Blow was released and, in that time, Depp has become more of a punchline than anything. He’s an actor you call when you want a “name” but don’t have much to attach to that name. He’s the actor you call when you need someone eccentric or willing to “go there” with a part, even if that’s all there is to the part. I suppose getting a Best Actor nomination for Jack Sparrow tends to make producers typecast you.

I don’t necessarily think the movie Blow was the fulcrum to the man’s career—the pivot point that separates Depp as a serious actor that occasionally had fun and Depp as a punchline actor that no one takes seriously even when he does try to be serious—but I do think the movie fell between the cracks in 2001 and hasn’t gained the cult following it deserved primarily because Johnny Depp has flamed out.

Blow is a movie about drug dealer George Jung, who, at the height of his success, was the most prolific dealer of cocaine in US history. At least, that’s what the back of the DVD said. I had a copy on my bookshelf from about 2002-2010 when I sold all my DVDs. In truth, Blow is really about a man trying to escape the shadow of his father. Jung’s father is, in his son’s estimation, a failure. He went bankrupt when George was ten and left an impression on his son by trying to telling that “money isn’t everything.” Far from seeing it that way, George grew up believing that money is exactly that: Everything, and however he could get it—however he could avoid being a ruined failure like his old man—he would. 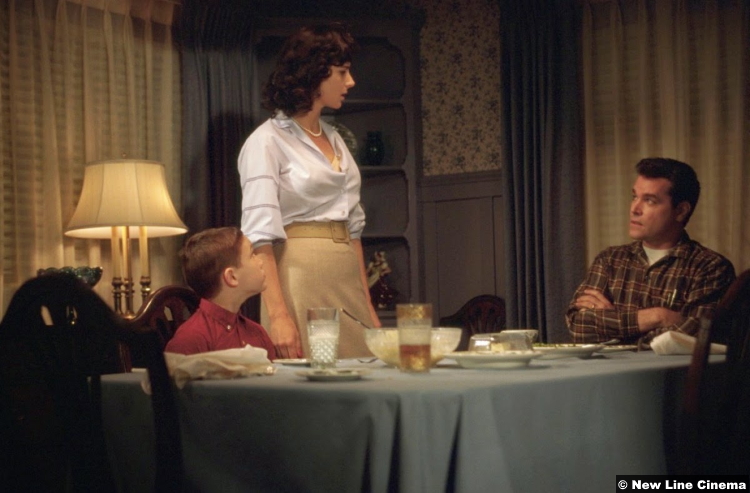 That’s not to say George outwardly despised his father, or even that he has a two-dimensional obsession with getting rich; he’s not an 80’s movie villain. George even occasionally shows outward apathy toward his riches throughout the movie, but if you look deep into Depp’s performance you can see a lot of unspoken characterization and motivation going on. The film paints a complex picture of Jung, as a young man trapped with a child-like view of his dad, wanting his approval while also desiring to outdo him. Honestly, a psychiatrist could have a field day analyzing George Jung (either in real life or as portrayed in the film), and a big part of why it works so well is because Johnny Depp still cared enough to put so much (spoken and unspoken) into the role.

In his quest to achieve wealth and success, George shoots for the moon, attains it, then has it all slip away. This happens not once, but multiple times in the story, with each collapse ushered in by George’s refrain “everything’s perfect.” You’d think after a while he’d learn to stop saying that. 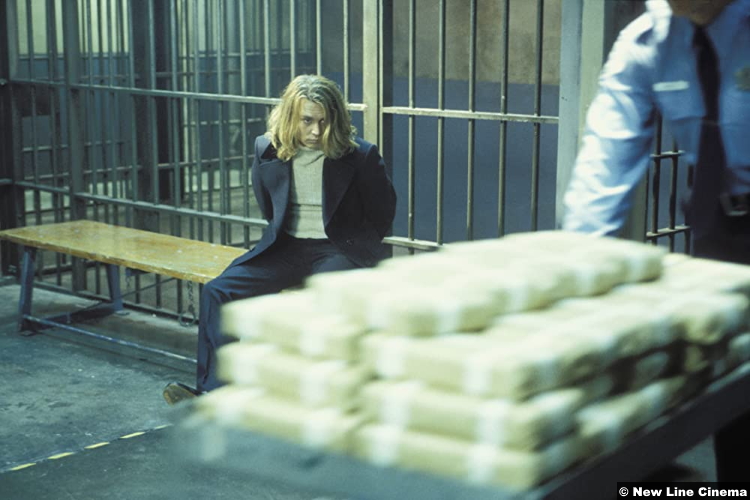 He learns cocaine is the secret to great wealth and it’s selling it that he becomes very good at. In one of the more heartbreaking moments of the film (even though it wasn’t necessarily meant to be on the surface) George and his father talk about life and success: George tells his dad “I’m good at it. I’m really good at it.” It being the selling of illegal drugs. His father—played excellently by Ray Liotta—has a poignant and understated reply: “You could’ve been good at anything, George.” Lesson not learned: You didn’t have to sell your soul to make your money, and you’re not impressing your dad, either. 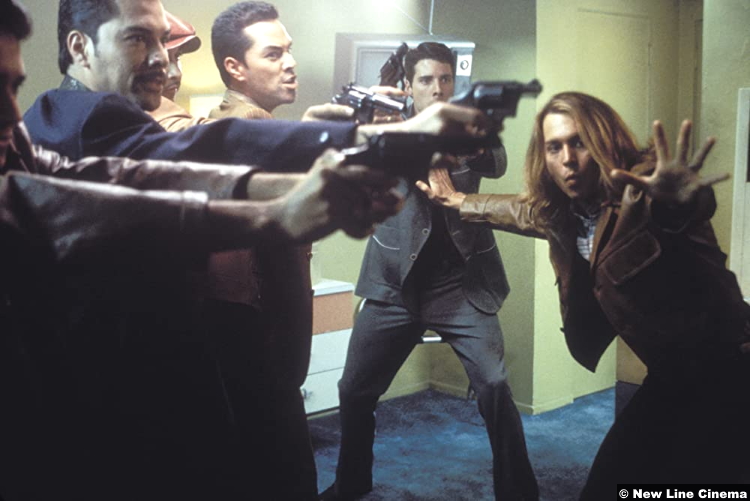 All those hard moral and philosophical issues are there to be examined, but they’re usually kept under the surface. Director Ted Demme keeps things for the most part to a biopic formula, but every now and then—usually when George is at his lowest points—he stops the hip soundtrack and playful editing and lets the actors inhabit their roles to bring the tragedy of the central character to life.

In 2001 there was no one better to do that than Johnny Depp.

Blow gave Depp a chance to do some subtle acting (and some not so subtle work too), to elevate the material and to put on a performance that should have been more acclaimed than it was.  The film made its total budget back and not much else. It never took off on home video, though a movie like that never was going to. I’m the only person I know who ever owned a copy of that DVD.

Later in the year, Depp starred in From Hell (a movie we’ll cover later this year). Made with a smaller budget, it made about the same at the box office, but it was a genre-movie and received a bit more home video play. Soon after, he was filming Pirates of the Caribbean, and diving full-bore into a series of career choices that made films like Blow the exception, not the rule.

Blow might not be a movie that’s very well remembered, but I remember it, not only for how much depth its characters had, but more importantly for how it reminds me of a time when my former favorite actor still cared about sinking his teeth into roles that were genuine, challenging, and—most importantly—real.