This is Naomi Nagata of the Rocinante…

Space hurts.  When Naomi wakes up after spending way too long in cold vacuum floating to her ship, she is in pain.  And it shows.  The makeup department did a stellar job giving her burst blood vessels in her eyes and on her face, and she just generally looks like she went several rounds with an avalanche and left the ring on a stretcher.  But that makeup wouldn’t be anything without Dominique Tipper’s acting, which, as always, is perfect. 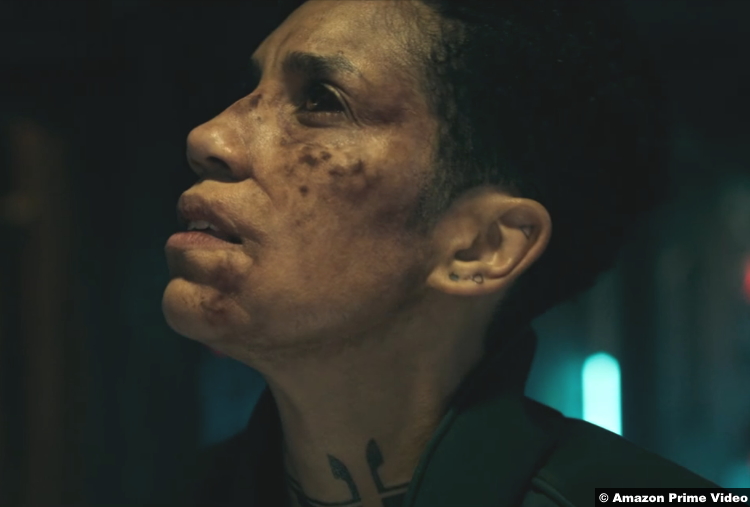 She’s on her ship, which Marco is using to lure the Roci to rescue “her” – he’s rigged it up to blow up as soon as the Roci docks.  She wasn’t supposed to be on the ship, of course – this was all about Marco taking the Roci off the board and getting vengeance against Naomi at the same time.

Naomi spends a lot of time staggering around her ship, obviously in extreme pain, trying to find some way to communicate the truth of her situation.  Marco has rigged a fake message from her as part of his plan, in which she urges anyone who can hear the message to retransmit it and “tell James Holden I am in distress.”  But her ship is stripped bare, no oxygen, no food, no working comms.

But she’s Naomi Badass Belter Nagata, and she’s going to find a way.

Other pieces are coming into place.  The UN is debating “proportional response” to Marco’s attack on Earth.  It’s a scene that reminds me of an early episode of The West Wing, in which President Bartlet, infuriated by an attack on American troops, demands to know the point of a “proportional response.”  He wants a “non-proportional response,” and has to wrestle with whether to murder innocent civilians to get the response he wants.  The same question is asked here, except that the new acting UN Sec-Gen is the listening voice, and the call for vengeance comes from Admiral Delgado, who wants to blow up Pallas Station.  It’s the same old argument as in any war – whose blood matters more, and since they killed a million of ours, isn’t it appropriate to kill several thousand of theirs?  The new UN Sec-Gen is a strong presence, but his position on the matter is unclear, and we’ll have to see which way he lands. 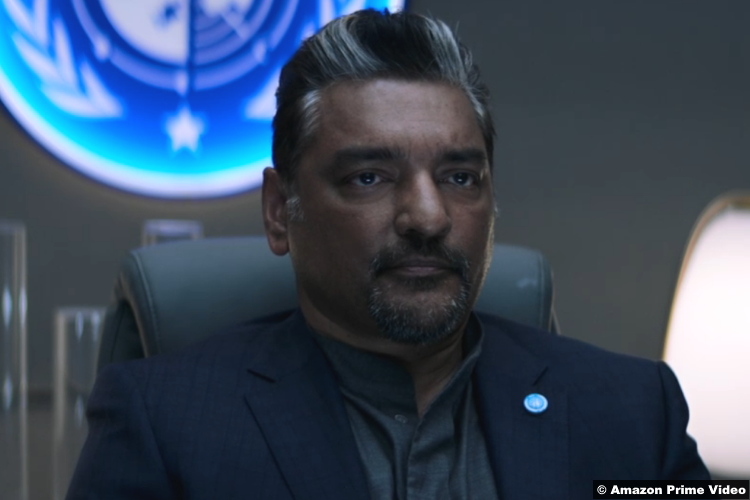 Meanwhile, Amos and Peaches make it to the drowned remains of Baltimore and talk to Erich, who is not very happy to see them – remember, last time he said he’d kill Amos if Amos showed up there again.  But Baltimore is devastated by the tsunami, and Erich’s whole empire is gone.  And Peaches knows of some rich people who have sub-orbital shuttles stashed away in their garages, so would Erich like to help them get off the planet pretty please?  Erich makes the calculus and agrees, and in a classic Amos moment, Amos says they should take some of that tequila he saw with them. 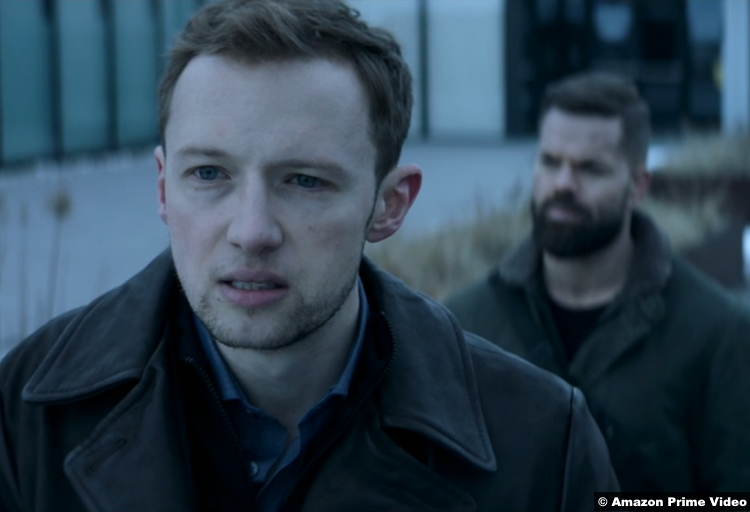 Drummer’s team is made of tension since they’ve been saddled with one of Marco’s lieutenants making sure they stick to the party line.  And Drummer seethes.  Oh she hates this.  And there is just a whole lot of not good feelings on that ship, beltalowda.  But the standout scene in this sequence is when Drummer learns that Naomi is dead and that Marco has some kind of nefarious plan that she “doesn’t need to know about.”  Drummer’s primal screams after storming off, and then grabbing that whiskey bottle – yes, that one – and starting to drink it – you know she’s cracked.  But what we don’t know yet is how she’s cracked.  Has she given up, or is she about to blow up and start kicking ass?  The answer is unclear. 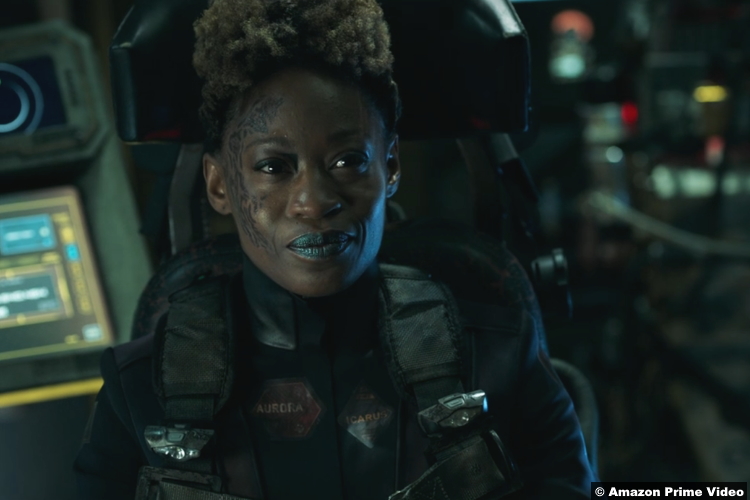 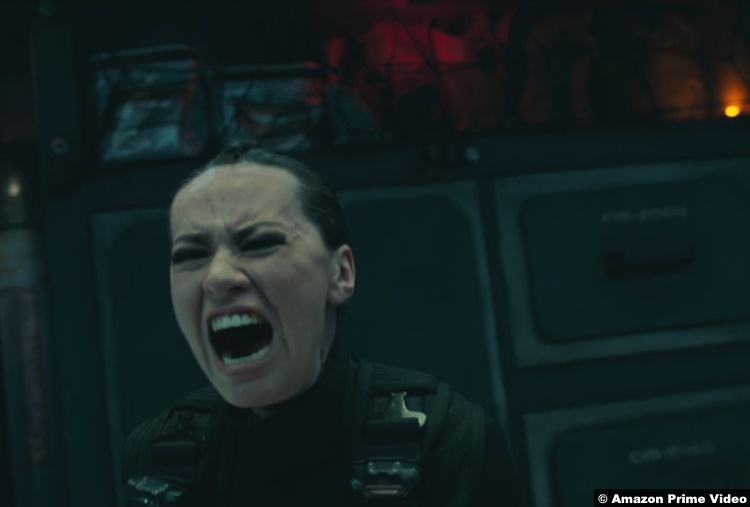 Then Naomi, like the ultimate badass that she is, figures out how to manipulate Marco’s fake message to hopefully, somehow, signal the Roci and the Razorback not to try to rescue her.  It’s a tiny, tiny thing she can try to do, but it’s all she can do, and she has to try so hard to do it – without supplemental oxygen, heading out into the outer hull over and over and over again, holding her breath as long as she can – it’s an astounding bit of filming, and I’m running out of superlatives to describe Tipper’s acting. 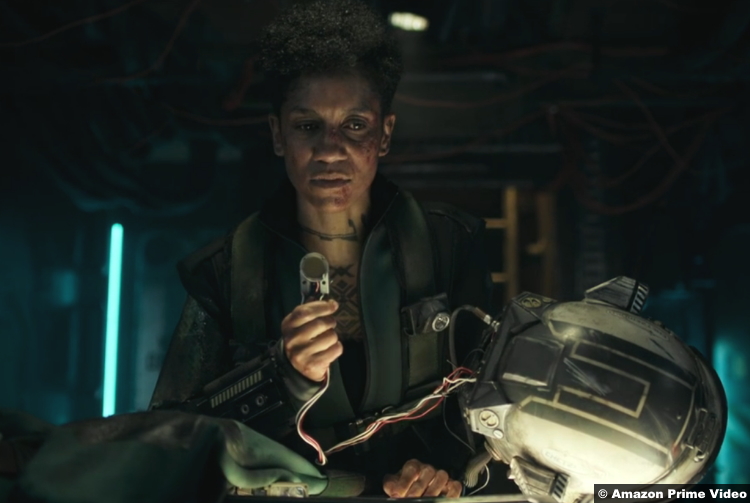 There’s not a lot else to analyze in this episode, quite frankly.  It’s mostly made of scene-setting, and the most important action is yet to come.  But as always with this show, it’s really good scene-setting.  And unlike past episodes, Marco and his Bond villain pantomime are relegated to a small scene at the beginning in which he’s mourning Cyn, and then blames Filip for Cyn’s death for whatever reason, so we’re spared a lot of Marco being Marco at us.  Look, the actor’s fine, and the acting is fine, but for some reason, he’s the weakest and most one-dimensional character on the show.  And I wish there was more to him.