National Lampoon’s Christmas Vacation is a delightful farce of cartoon shenanigans and ribaldry. It was designed, and perfectly executes its mission to be surface-level entertainment. It requires no deep analysis or long-winded contemplation in order to be appreciated. 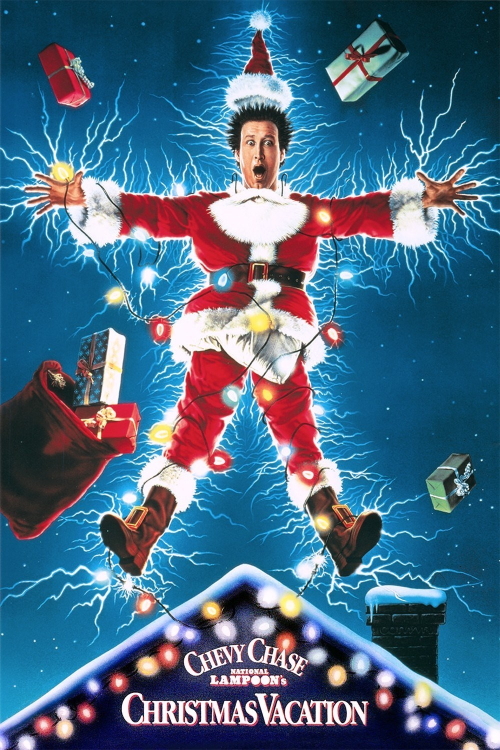 I only have this to say as an introduction: Christmas Vacation is the story of a man who had humongous holiday ambitions and, though it seems like the universe was conspiring against him, I would argue that, in fact, our hero is a modern-day Job, his faith being tested, only for him to come out of the other side stronger and better than before. 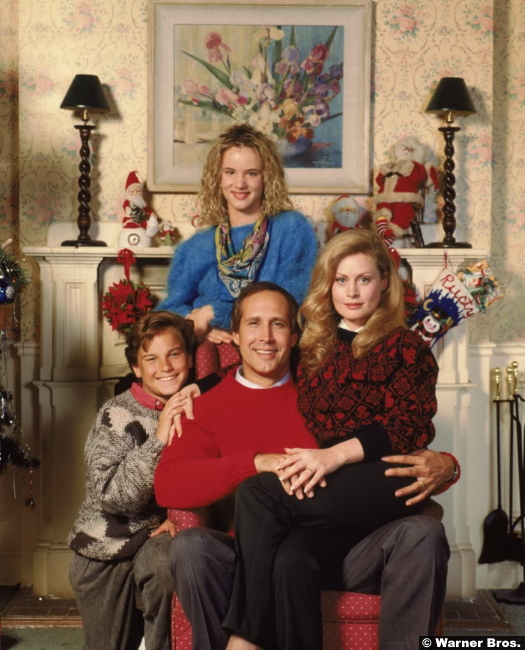 I would direct you to the final line of the movie, “I did it,” and how those three little words perfectly sum up all that came before. We’re told the thesis of the film within the first twenty minutes: Clark W. Griswold always wanted to have a big, old fashioned family Christmas at his house and, despite how often his ambitious plans end up going off the rails, he sets out to accomplish just that. True to form, every possible thing that could go wrong does go wrong, and therein lies the comedy. It should be noted, however, that in the end, everything Clark wanted…he gets. Full stop. 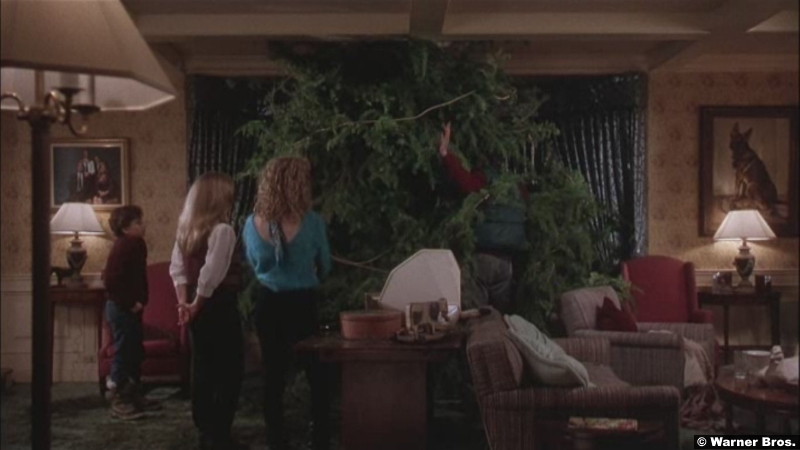 “Dad that thing wouldn’t fit in our yard!”

The Christmas Tree is the focus of the first sequence of the movie, a three-act mini-story beginning with the car ride over, the discovery of the tree, and the dedication in the living room. Each act has a strong punch line to move us into the next: Act one ends with the family car sailing off the interstate and crashing onto the Christmas Tree lot. Act two ends with them finding the perfect tree—all twenty feet of it—only to discover they forgot a saw. Act three ends with a pair of scissors cutting free the ropes that were holding the tremendous Tannenbaum together, sending branches flying in all directions.

Clark struggles with the tree throughout the movie and, at one point the absent-minded octogenarian Uncle Lewis burns it to ashes. And yet, it’s not the actual timber and tinsel that matter, it’s the humor that comes from the “family Christmas Tree” itself. Whether it’s the one he dug out of the earth or the one he brought in from the front yard (squirrel and all), the Tree is, as Clark says “the symbol of the Griswold Family Christmas.” At the end of the movie it is twinkling in the background as he reads The Night Before Christmas. He needed a tree for the holiday and, true to his goal, he got it. 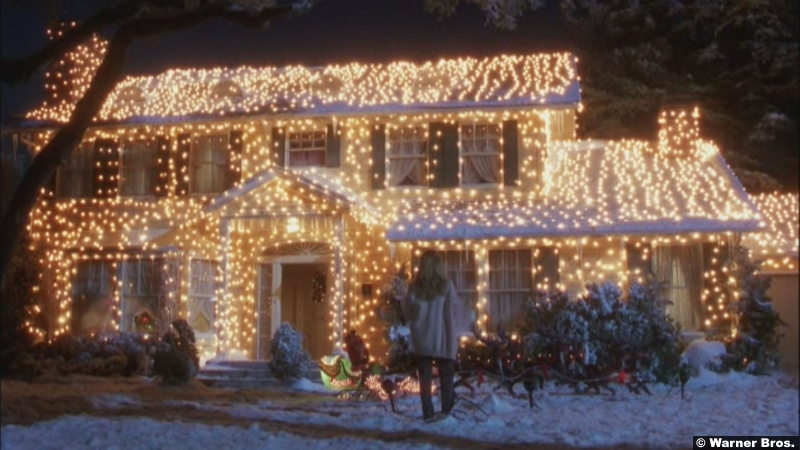 “So do washing machines.”

What holiday home would be complete without a few lights for the neighbors to ogle over? Clark Griswold understood the need for a spectacular light show, and he set out to make his house the biggest, most sparkling, on the block. Twenty-five thousand imported Italian twinkle lights were stapled on and around his house, connected to what looked to be twenty-five extension cords, and all controlled by a single flip-switch in the basement. After bringing the whole family out to witness the splendor, he plugs in the power cord to…nothing.

As a result of his apparent failure, he’s laughed at, disappointed, confused, and frustrated.

He doesn’t give up, however. After taking out his frustration on the little Santa display, his wife figures out the problem, throws the switch, and brings the magic of Christmas to the greater Chicago area (thanks to a nuclear powered auxiliary breaker being flipped by the power company). As the family gathers outside for the final moments of the film, the thousands and thousands of lights continue to beam behind them. He wanted lights we would never forget; he got it. 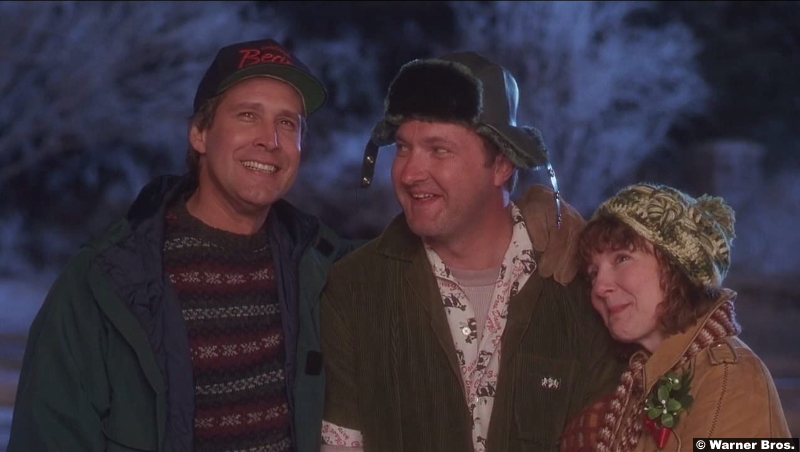 “Can I refill your eggnog for you, Ed? Get you something to eat?…Drive you out to the middle of nowhere, leave you for dead?”

You can’t have a big “family” Christmas without the family, so in-laws from all around descend upon the Griswold estate. One of the low-key best scenes of the movie is the slow, haunting push in on the front door, as the argumentative chatter from the dueling grandparent-sets slowly rises in volume. Once the door is opened it’s a madhouse, with cheeks pinched, good behavior promised, and requests made to rub burs on heels (for a “whole quarter”). The mania never relents for the rest of the picture, and yet, though Clark’s in-laws are combative and dismissive of him, he manages them well. Everything changes, however, when Cousin Eddie arrives in his RV. Like a tempest of chaos that rages against Clark’s barely held-together boat, Eddie brings out the chortling worst in Clark, whose snide comments toward his oblivious brother-in-law-by-marriage are never not hilarious.

And yet, after Clark reaches his breaking point and the family seems ready to walk, everybody pulls it together for the final stretch, featuring a chase around the house by a single, harmless, little squirrel. I’d be remiss not to mention Aunt Bethany, half-demented in her old age, reciting the pledge of allegiance in lieu of a Christmas Dinner Prayer, and then later singing The Star-Spangled Banner as the miniature Reindeer and Sleigh sail through the sky, aflame due to the explosion of sewer gas beneath them. It’s a delightful ending, surreal and cartoonish, but regardless, the family is gathered outside to watch, and they’re all united as “kith and kin.” That’s what Clark wanted, and he got it. 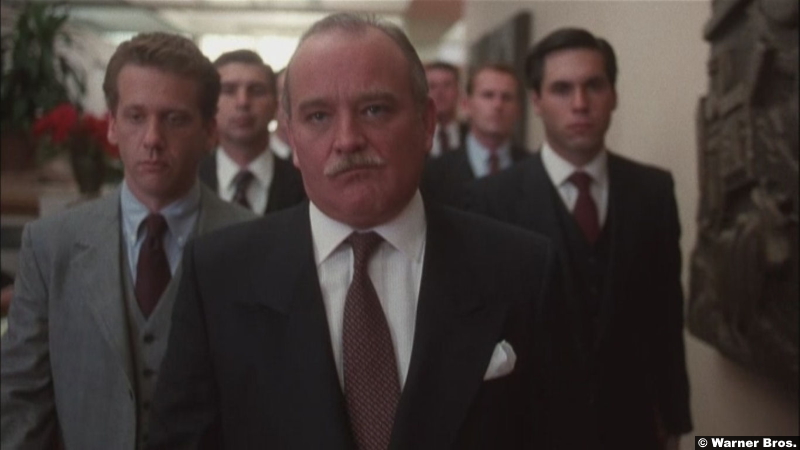 “It’s a…one year subscription to the Jelly of the Month Club.”

“Clark that’s the gift that keeps on giving the whole year through.”

If there is an actual “plot” to the movie it revolves around Clark’s worry about getting his Christmas bonus. It was company policy for employees to get a little something extra for the holidays and, expecting that trend to continue, Clark put a massive downpayment in on a pool. As the holiday approaches, his anxiety rises. It’s not until Christmas eve night that, finally, the mailman delivers the envelope. It’s only then that Clark tells the family his plans, and soaks in their adulation. After all the struggles and hardships he endured, getting that letter from his boss made it all worth it. He ripped open the envelope and looked inside.

It was the Jelly of the Month Club.

What follows is the queen mother of tirades. The difference between this and the one that followed the burning of his tree is that here Clark is entirely blameless. His only crime here was expecting his boss to maintain the flimsy shred of humanity he had the year previous. When that was taken away (and when Cousin Eddie produced Mr. Shirley in his pajamas to the family, hogtied with a giant Christmas ribbon), the whole family—even the loathsome in-laws—stood behind him in solidarity. Shirley buckled and decided to give Clark a 20% bonus, which is probably four times bigger than the bonus he received the previous year.

The movie ends on Christmas Eve night. We’re never shown the pool being put in, or the family being flown out to enjoy it the following summer, but we can imagine how it went. There’s probably a whole movie’s worth of shenanigans right there. What we are shown, however, is a man looking up at the stars, smiling to himself, satisfied despite all the insanity the past week had brought him, and content that he had done exactly what he set out to do. 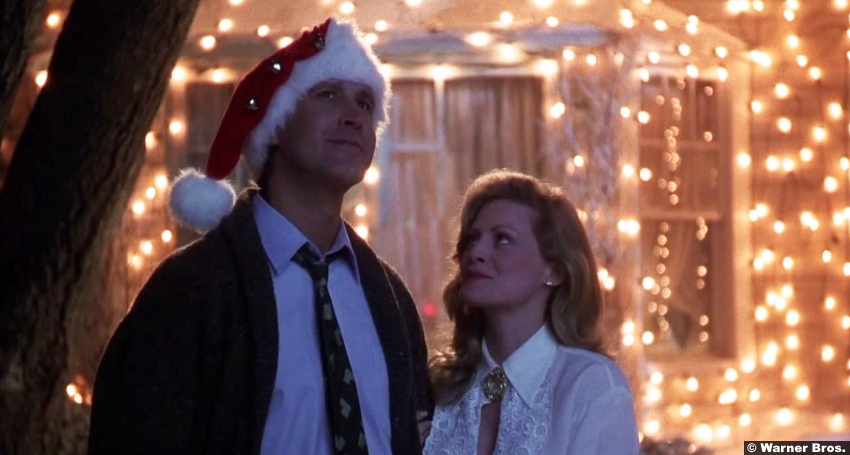