As soon as the pumpkins are put away and the bats and skeletons return to the box in the garage, you can count on Christmastime to be here. Though some may prefer to wait until December to enjoy the holiday, popular media is not so patient. Christmas movies begin playing November 1st on various cable channels, and despite the frustrations of those for whom Thanksgiving is the crown-jewel of their festive times, the fact is there’s just not a lot of Thanksgiving-themed movies to enjoy.

But there is one, and it’s a doozy. 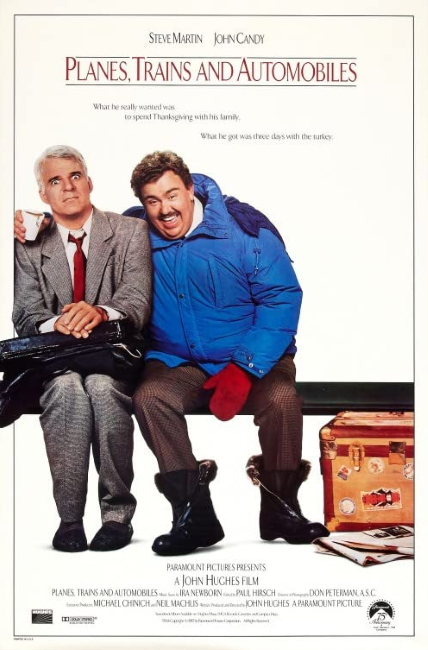 It might not seem like it since the word “Thanksgiving” appears no more than three times, and a picture of a turkey appears no more than for three seconds, but Planes, Trains, and Automobiles is, in my opinion, the quintessential movie to celebrate Thanksgiving. After all, what is the holiday about but family, fellowship, and, well, giving thanks for one’s blessings?

Planes, Trains, and Automobiles combines all the things that make the holiday great, just not in schmaltzy, conventional ways. The movie is from the mind of John Hughes, already famous in 1987 as the director of teenage angst and adventure. His credits to this point included Sixteen Candles, The Breakfast Club, Pretty in Pink, Weird Science, and Ferris Bueller’s Day Off. As a result, it might’ve been a tough sell for him to make a movie that had next to no teenagers anywhere to be seen. Nevertheless, he did have one movie in his catalog that made him more than qualified for such an undertaking: The first National Lampoon’s Vacation movie.

Hughes was inspired to write this grown-up misadventure after a flight home was diverted to Wichita, Kansas, delaying him five days. Though he did not encounter anyone akin to Del Griffith (or maybe he would have been Del, set to encounter a Neal), he no doubt wrestled with his own impatience and perhaps found perverse pleasure in the small-town atmosphere he’d been unexpectedly dumped into.

The first time we see Neal Page he’s in a hurry, frustrated with a delay, and ready to snap. 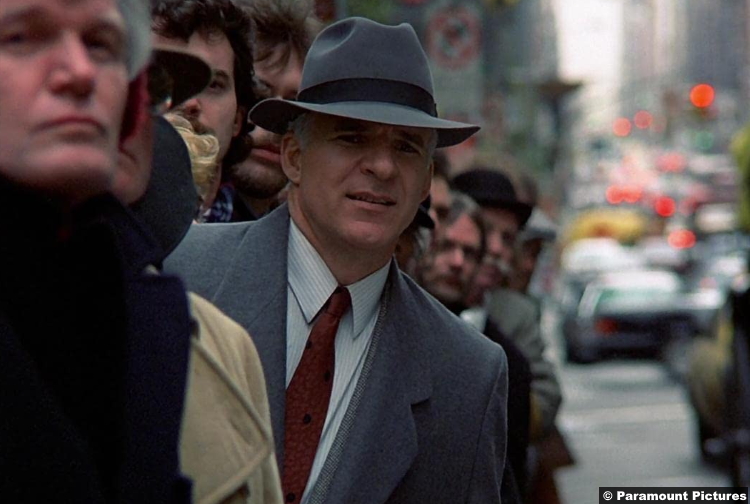 If there’s one thing that stands out after re-watching this movie every Thanksgiving-time, it’s how perfectly edited it is. Famously, John Hughes shot 600,000 feet of film (the industry standard is 300,000 feet) and had enough material to put together a three and a half-hour cut. Indeed, his final draft was 145 pages long (well beyond the length typical for a comedy movie, which usually end up about 90 pages). In Hughes’ mind, this was always supposed to be an “epic,” but somewhere along the way he and legendary editor Paul Hirsch trimmed it down to two hours, and then again to a tight ninety-minute film.

If you look close enough, you can find some of the seams where the editing took out huge chunks of the film. Late in the story, Del and Neal are driving the beat-up car only to be stopped by a police officer. What you don’t notice unless you look carefully is that he’s a Wisconsin officer…and since Wisconsin is a state to the north of Chicago, you might wonder how they ended up driving past the place they were going. That was a whole twenty minutes right there. 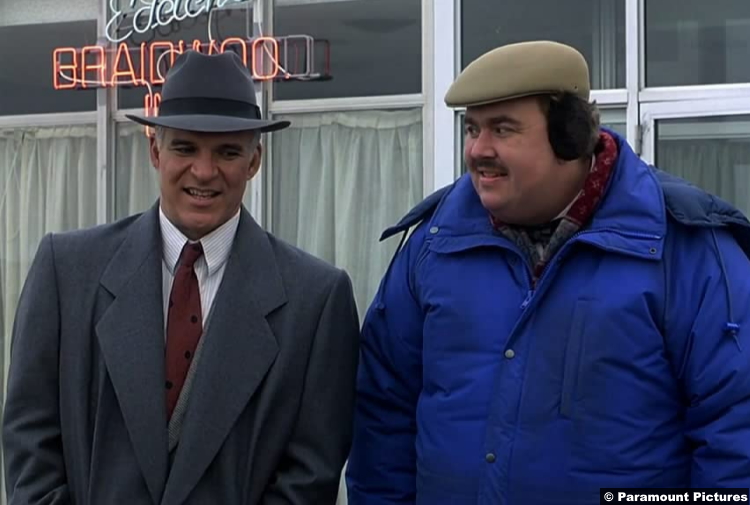 Toward the end, as the duo sits inside a refrigerated semi hauling cheese, you might notice Neal has a black eye. That’s because he got into a fight with the driver who refused to let them sit in the (heated) cab. Also, there’s probably a whole half hour that was cut that just features Del being obnoxious, with his smoking, his singing, his whole shower routine, and so on.

I didn’t even mention the ten-minute scene in a strip club as the duo searched for a phone.

Like Anchorman, there was enough footage cut from the movie that one could, theoretically, compile an entirely new version of the film. Obviously, a comedy movie as long as Gone with the Wind is not practical (though I’d love to see it), so trimming it down to 90 minutes was simply good prudence. That being said, managing to make it even a coherent movie with that much of its guts removed is a testament to the strong theme in Hughes’ story, and to Hirsch’s talents in the editing room.

The end result is a movie with perfect pacing. There is no wasted second, no joke that overstays its welcome. It helps that the two men who are on screen for 89 of the film’s 90 minutes—Steve Martin and John Candy—were at the top of their comedic games. With subtle delivery and non-verbal dialogue, they were able to squeeze minutes of laughter out of ten-second jokes.

And then there’s the verbal dialogue. 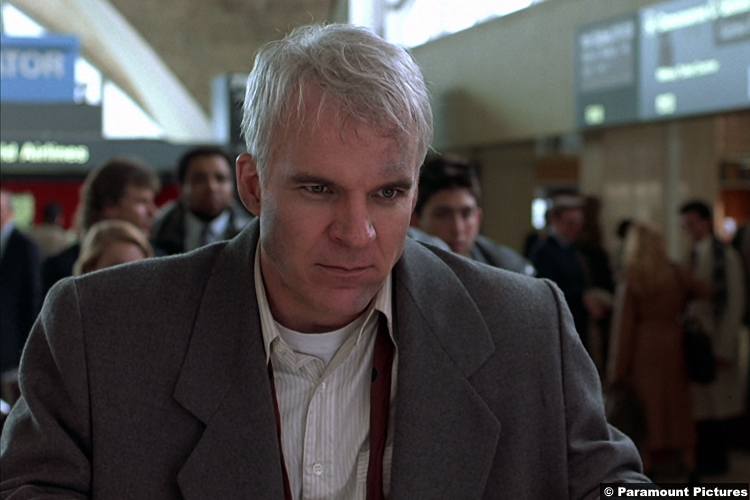 Perhaps the movie’s most infamous sequence comes when Neal, at his wit’s end, finds that his rent-a-car is simply…not there. Left stranded at the lot, he’s forced to hike three miles back to the hub to speak with an obviously indifferent teller. What follows is a six-minute tirade of profanity, wherein Steve Martin fires off the F-bomb no less than eighteen times in the span of a minute. It’s worthy of Tarantino, of Scorsese, and not what one would expect of John Hughes. In fact, had the tirade been cut, the movie would have earned a mere PG rating. Instead, that one single minute of the film—which Hughes refused to trim despite cutting so many other moments—gave the movie an R rating. Of course, had Hughes decided to cut the scene, Steve Martin would have left the project, since the only reason he took it was because he felt such a blow-up was the only reasonable and logical thing for a man in that moment to do.

And yet, the film is perfect for Thanksgiving.

Why? Because at the heart of the story is Neal Page, a man angry and impatient to get back to his family, and is forced by the cruel hand of fate to continue bumping into and hitching rides with a man so incessantly cheerful, so unflappable in his disposition, and so endlessly patient, his very existence offends Neal to the core. And who is this impossible man, Del? As we slowly discover, he’s a man who hides a great deal of sadness under his large, joyous shell. It’s a front. It’s a put-on. But he’s not a divorcee, like I thought as I watched the movie for the first time. No, he’s a widower. He’s not a man who worked so hard he lost his wife. He’s a man who lost his wife and thus works so hard; he has nothing else. He has no family. He has no home. He has no one to enjoy with him what makes Thanksgiving such a wonderful day of the year. 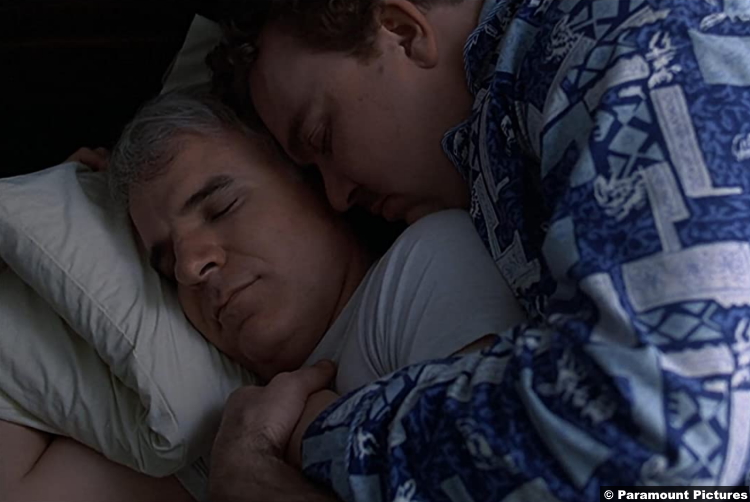 So, in the end, Neal opens his home to him, and though we don’t see it because the movie doesn’t spend one second on the actual enjoyment of Thanksgiving, we can assume that these unlikely friends enjoy not only this holiday meal together, but many more that follow.

Annually, I watch every Christmas movie that I’ve ever loved between Halloween and Christmas night. I love the movies that tell fanciful tales, that touch on morality, that make me laugh with good-natured humor, or that use wit and sarcasm to offer some social commentary. I love all kinds of holiday movies, but I especially love pausing the Christmas viewings, during the week of Thanksgiving, to watch what might just be my favorite movie to watch this time of year. Planes Trains & Automobiles reminds me to be thankful for my family, to be mindful of the friends I might meet along life’s sometimes-turbulent journey, and to appreciate the simple joy of fellowship with kindred spirits, no matter how unlikely that kindredness may be.