First of all, watching Rudolph in our house around Christmas time is as certain a thing as hanging stockings. It’s going to happen. The 1964 special is part of our family’s regular rotation of films that we watch every year around this time. So what I’m about to say is not meant to imply that I hate Christmas (far from it) or even this special in question (not at all). I love this special. I loved it when I was a child, mesmerized by the stop-motion animation, and I love it now as I watch my children be equally mesmerized. But now that I’m older I see things in the show that I didn’t as a child. There are some serious issues here that need to be addressed before we label it the greatest Christmas special of all time.

So, if I may, here are some (tongue in cheek) observations I have made about this movie, in order of significance. Okay, not really: In order of my thinking of them as I watch the show:

1) It’s narrated by a snowman pretending to be Colonel Sanders. Why? He wasn’t even a real colonel! 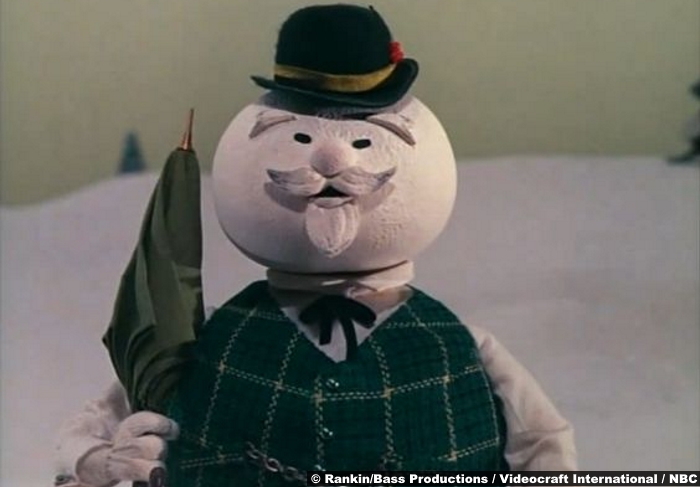 2) Every potential role model for Rudolph is a grade-A jerk. First there’s his dad who tries to hide his handicap, then there’s Santa who disregards his natural flying talent because of his red beak. Rudolph’s coach (who sounds like a radio star from the 1930’s) looked like he saw a demon the first time he laid eyes on the glow (keep in mind this was just seconds after Rudolph pulled a superman in front of the entire school). Even Rudy’s future father-in-law wanted nothing to do with him. At one point, after playing sweetly with some bear cubs, a polar bear mama decided, instead of chasing away the possibly threatening deer, she’d just scold him for having a physical disability in the presence of her babies. The only adult who didn’t give Rudolph the third degree was Yukon Cornelius, the undisputed hero of the picture (more on him later). 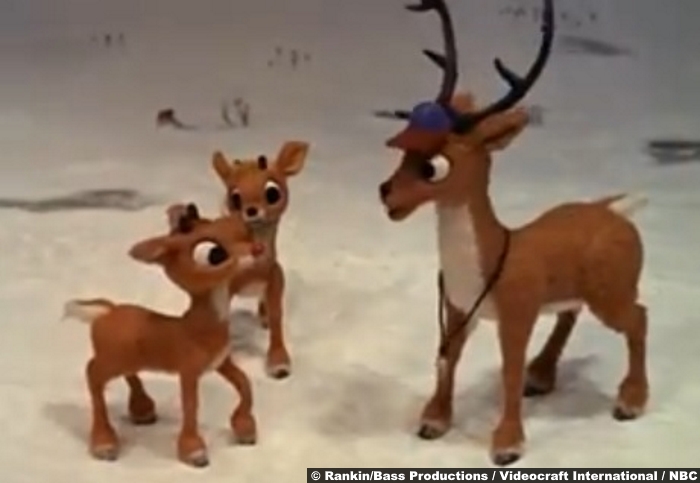 3) Santa is the worst. The dirt worst. Here’s a guy who lives in a literal castle while elven slave labor does all the work for him in prep for Christmas. All Santa Claus has to do is eat so that he can be fat. Don’t ask me why it’s important, it’s just the way it has to be. Kids expect Santa to be fat, so Santa needs to eat. But what does this Santa do? Like a petulant two year old, Santa refuses to eat. And we’re not talking about plates filled with peas and carrots. He’s not balking at a bowl of steamed cabbage. His wife cooks him a delicious four-course meal. No doubt she slaved over it but he refuses to eat because he doesn’t like being told what to do. Oh how hard the life of Mr. Claus must be! When forced to sit and listen to a song sung in his honor by his slaves, Kim Jong Kringle waves his hand and derides it. His only words of encouragement are “it needs work.” 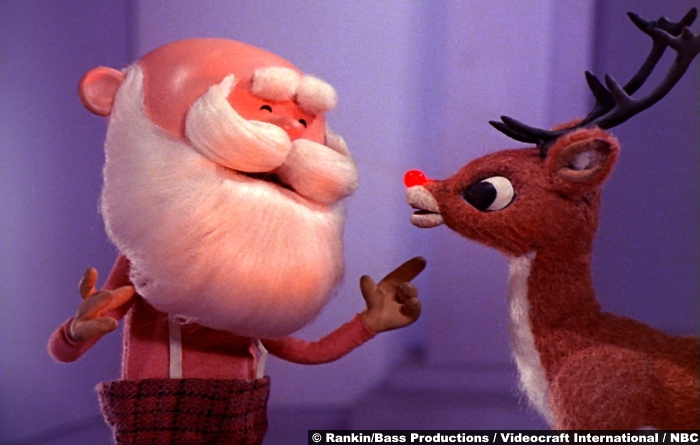 4) Then there’s the head elf, who makes R Lee Ermey from Full Metal Jacket come off like Mother Teresa. He is just SO MAD that one of his sweat shop sad sacks wants to be a dentist. In other words, the one profession that would actually be of benefit to the people up there is balked at. Am I supposed to believe there’s no need for a dentist in a land where everyone eats nothing but sugar plums and fudge all the time? Give me a break. But instead of embracing this sweet homosexual guy who just wants to help people’s teeth and make something of his life, his boss chooses to belittle him and encourage the rest of his peers to belittle him too. Sad! 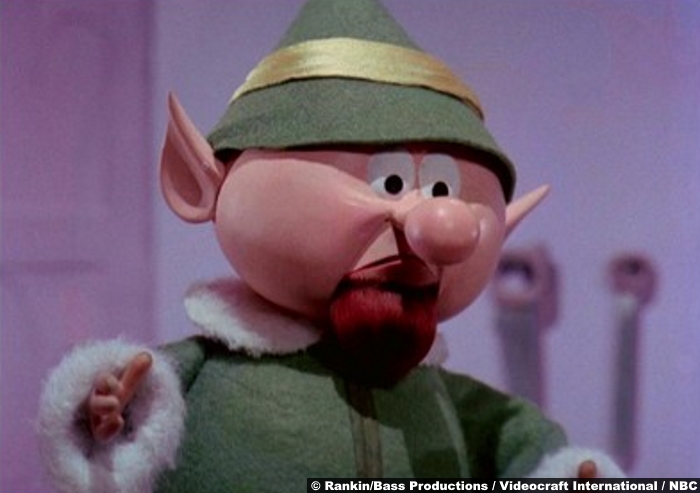 5) Yukon Cornelius, however, is the gem of the picture. Here’s a guy whose only real crime is minor avarice. Other than that he’s a hoot. He SHOUTS EVERYTHING HE SAYS and gets a kick out of licking snow off of anything he sees. He reminds me of me if I had a big bushy red beard and a pick axe. At the climax of the movie, he bulrushes the snow-monster (which had already been rendered harmless by aforementioned burgeoning gay dentist) and knocks both it and him over the side of a chasm (reenacting the ending to the third Indiana Jones film). Even though it had already been established that the snowman posed no threat Yukon just HAD to go and kill it just for the thrill of it. Love that guy.

6) And there’s something odd about the lion king that runs the island of rejects. According to Charlie (in the box) the Lion King flies around the world every night and collects toys to live in and around his castle. He’s like bizarro Santa, taking toys to live with him. The idea is that on Christmas Eve, Santa would fly by, pick up the toys and deliver them to needy children. But think about it: If you can fly all over the world in a night, why not take the toys to live with needy children yourself? What’s stopping Aslan here from going into the Santa Business for himself? Why rely on Santa at all? I’ll tell ya why: Because he never believed Santa was coming. He knew what a colossal jerk the big guy was so he figured he’d keep collecting toys to serve him in his kingdom, like the elephant with chicken pox he forces to be his butler. He’s basically Lots-o Huggin Bear, people, wake up! 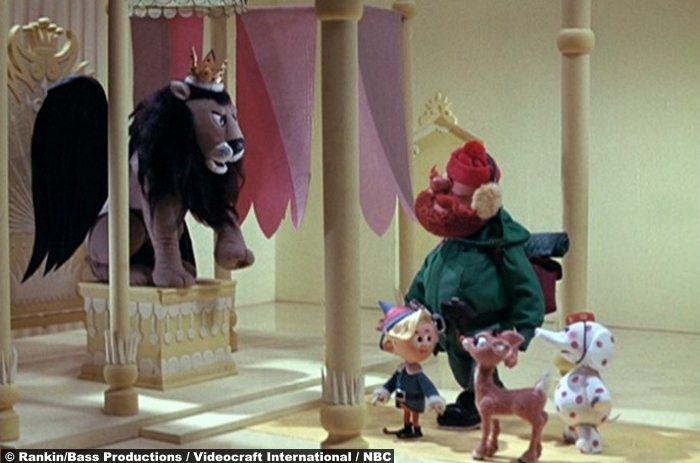 All in all my problem with the story is that it offers morals which are dubious at best and obscene at worst. I love the casual chauvinism of Donner telling his wife “this is man business” as he heads out to look for the son he never loved. And then at the end, while everyone is held in the clutches of the abominable snow-monster, all they say about their plight is their need to get the women folk home, like they are delicate snowflakes that might break a doenail.

But sure, go on and roll your eyes. Keep telling me I’m ruining Christmas. Go on with your TV special that teaches us it’s okay to discriminate against the handicapped, mock gay dentists, exploit the oppressed and turn back gender equality fifty years. You go on. 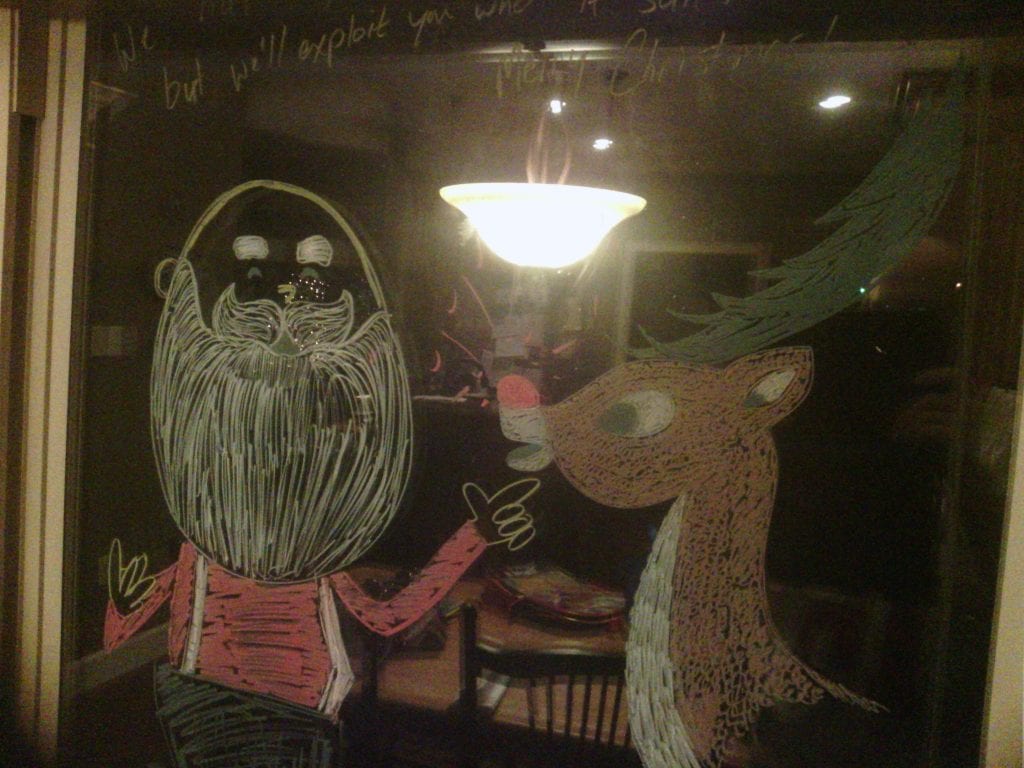 Again, the show will remain a regular part of our Christmas movie night experience. Shoot, I drew (as seen above) two of the principal characters on our kitchen window as a Christmas decoration (with a caption that reads “we hate you because you’re different but we’ll exploit you when it suits our interests”) but I can no longer ignore the dark underbelly this movie presents. I will allow my children to be exposed to it, just as I was as a lad, but one day, when they are old enough, I will sit them down and walk them through the movie, step by step, so that they understand just how shameful the whole production really is!

And don’t even get me started on The Grinch…