Despite how long and horrid 2020 has felt and been, at the same time it feels like only yesterday that AEW Dynamite premiered on TNT. It certainly doesn’t feel like it was a year ago. When the brand first launched, there was a lot of hype and anticipation, as you might expect. The new league promised—either explicitly or implicitly—to be a little bit WCW, a little bit old school Jim Crockett, a little NJPW, and a little bit something new.

One year later it has, in my opinion, lived up to that helter-skelter identity.

Has it been a perfect year? Not at all, there was a slew of little problems early on, it took a while for the show’s identity to appear, and there are still flaws and rough edges that need work, but it’s only been a year. One year after Monday Night Raw debuted, the show was still filled with jobbers and squash matches, with rinky dinky lighting and little to be excited about. Slowly it grew into a polished powerhouse. The same is likely true for AEW.

And what of NXT?

Once the darling of the WWE fanbase, NXT evolved from an underground favorite to a legitimate third-brand of the company. Its success with a certain demographic of WWE’s fans made it a no-brainer to move to cable television, running it on Wednesday nights as counter-programming to AEW. No one can fault the decision-making process here; it makes perfect sense exactly why WWE did what they did.

That being said, no one can deny how much of a failure it has been, on two levels.

First, NXT’s move to cable television has not done what the company wanted it to do: It has not blunted or stunted AEW’s growth. Far from it, AEW has consistently beaten NXT in the head-to-head ratings battle. In fact, there have only been four times over the past year that NXT won in overall viewers, and never have they won in the key 18-35 demographic so coveted by advertisers. Before Dynamite debuted, it was reported that TNT would be happy for the show to settle into around 400-500k viewers per week. Mind you, that’s basically asking for them to pull in a quarter of what the 25+-year franchise show Monday Night Raw was pulling in a year ago. Instead, AEW has consistently averaged over 800k viewers, and even with NXT running opposite, the show has broken the million-viewer mark multiple times.

NXT has done that zero times when running head to head with AEW. 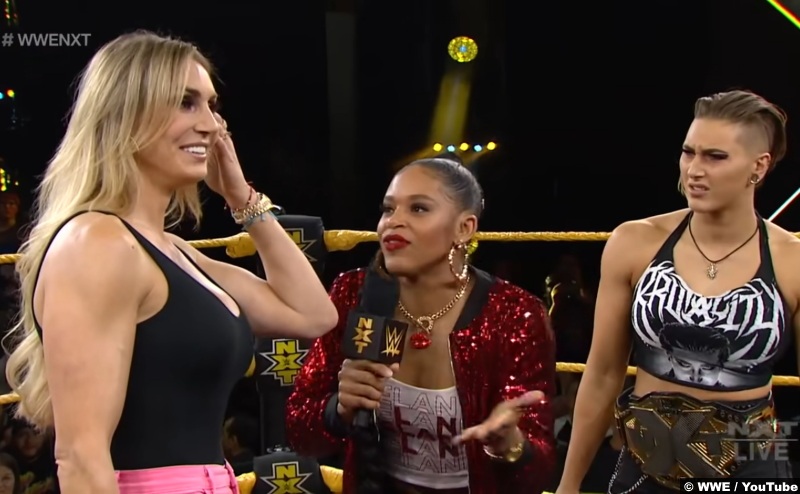 Second, NXT’s move to cable television has not translated into a better program. It hasn’t even been able to maintain its previous standing as a great program. Most weeks I wouldn’t even call it a good program. It’s almost always fine, sometimes it’s good, occasionally it will have a great episode, but mostly it’s just fine, nothing more. The show has lost a lot of what made it so special when it was a WWE Network exclusive. It was able to exist as a sort of a parallel dimension to WWE’s Raw and Smackdown. It belonged to the same universe, but was detached, unique, existing under its own rules, having its own culture, its own lingo, its own identity. It succeeded almost entirely because it didn’t feel like “yellow-colored WWE” the way Raw is just “red WWE” and SmackDown is just “blue WWE.” Corporate synergy did not taint the old NXT. Likewise, it existing separately from Raw/SmackDown meant new stars were called up once or twice a year every year, creating roster turnover that kept everything fresh.

Now that NXT is on cable television, the show has gotten stale. The small amount of roster turnover they’ve had is consistent with what we’ve seen from Raw and Smackdown, but that’s the problem: NXT just feels like Wednesday night Raw, or Yellow SmackDown. The only thing different from those two shows about is actually another detriment: it spent the year still running in either the Performance Center or Full Sail. The fans’ expectation of 4-star matches every week meant the brand was pressured to put on a weekly mini-Takeover and, for a while, they were pulling it off. They weren’t winning the ratings, though, and I and others kept saying “this is not sustainable.” One year later, it hasn’t been; and NXT has become a duller, safer, more “main-roster” boring show. Again, there are still great moments to be found, but everything is now homogenized with Raw and SmackDown, meaning its one primary goal as a cable show (undercut AEW) is nullified because part of AEW’s appeal is that it’s the counter-culture alternative to WWE.

Attempts to bring talent like Charlotte Flair and Finn Balor back down have not helped. In the case of Flair, it actively hurt the ratings. In the case of Finn, it’s failed to move the needle in any meaningful way. It’s a tough nut to crack because the reason fans flock to AEW is because it’s not run by Vince McMahon, and the longer NXT continues down the path it’s on, the more it’s going to feel like just another branch on Vince McMahon’s tired old tree.

All year long we’ve been examining the battle between AEW and NXT, and while I’m not immune to bias, I also know myself well enough to know I want both shows to succeed. I’d probably prefer they succeed on different nights, but whatever. I don’t give AEW the benefit of the doubt as a new company, but I do take into account the fact that they’re new. I want to see improvement, not perfection. Likewise, I don’t judge NXT more harshly because they have the added benefits of WWE’s machine supporting them, but I do recognize that with the media might of WWE, NXT should be able to do certain things, weather certain storms, and take certain chances that a startup like AEW can not.

Looking back on the past year, I see one brand that started out with a big viewership but a rocky presentation, then lost viewers and slowly worked on fixing their problems. After a few months things leveled off, things got figured out, and things slowly starting climbing. By February, the show was on the cusp of pulling in a million viewers per week. Then Covid happened and pretty much all TV suffered as a result. Nevertheless, AEW kept grinding, kept chugging along, and now, though the pandemic continues, the show has climbed back almost to pre-covid levels of ratings. And even though their biggest network partner—the NBA on TNT—has had historically low ratings, AEW’s ratings have steadily increased. They’re in a good place right now and, when the pandemic is passed, they will be poised to cement their place as the kings of Wednesday night, and become a legitimate ratings threat, not to NXT but to Monday Night Raw.

Looking back over the past year, I see another brand that started out with all the momentum and goodwill you could expect from a traditionally fickle fanbase, then slowly eroded that goodwill due to making all the same mistakes that eroded the goodwill of Raw and SmackDown’s fans. Rushed, inconsistent booking, giving away big matches without much build-up, running feuds into the ground, and a stale main-event scene; those have been the hallmarks of NXT’s first year on cable TV. As a result, they’ve entrenched themselves as the number-two show on Wednesday nights. Can they turn it around? Sure. Raw lost to Nitro for a year and a half or so before finding its footing and skyrocketing to the top. If Raw can do it, so can NXT. That being said, asking NXT to find their own Stone Cold/Attitude Era is a tall order.

One year later, they’re still struggling to justify their place on cable.