August has seen the biggest shakeup to the stale COVID-19 era formula since in months. And boy does it depress me that I have to start quantifying this stuff in terms of “months” and “eras.” When everything shut down, AEW was the first to play around with their visual presentation to accommodate the lack of fans, moving the camera around to focus on the ring and the stage and not the empty seats. NXT eventually copied them to the betterment of that show and also started bringing in performance center talent to pepper around the crowd cheering and booing as instructed. AEW also started having a sparse number of wrestlers and their friends/family attend, bringing some semblance of a live atmosphere back to the shows.

All of these steps were appreciated even if they amounted to little more than a few half-measures. But now, finally, though the pandemic continues to rage and the change in production and presentation is still in effect for both companies, things have improved with both companies and the way they bring their products to the screen…

Little, half-measure changes were the norm throughout the first several months of the pandemic, but as said, WWE and AEW took a big leap forward in August. WWE programs switched to the Thunderdome, which is basically the love child of an empty basketball arena (with a lot of light beams) and the game Guess Who. Unfortunately, NXT has not entered the Thunderdome, nor have they gone Beyond Thunderdome. They’re still in the dimly lit barn.

AEW, however, on the last show of the month, brought fans back to Dynamite. Granted, it’s only ten percent of capacity, spaced out, screened for COVID, and wearing masks to mitigate the spread from any who are asymptomatic, but still, after one show, it’s made a world of difference. This is not an AEW vs WWE thread, however. It’s a Wednesday Night War thread, and since NXT hasn’t improved their production and AEW has, there’s no way not to give the win to TNT’s wrestling flagship. A live audience is what wrestling was made for and I’m glad at least one of the two brands has it.

I want to praise NXT wherever I can because I don’t want to appear biased or one-sided. In fact, I sometimes go out of my way to turn a blind eye to something great AEW might’ve done in one area in order to give NXT a win here and there. In terms of the wrestling cards for the shows this month, both brands had some great lineups. NXT shined brightest whenever Io Shirai, Breezango, or Keith Lee competed, and the “alright, let’s do this I guess” feud between Adam Cole and Pat McAfee made for some fun segments (the actual match was very fun, but it was on a Takeover so it doesn’t count here). NXT was good this month but was rarely anything more than good.

Over on TNT, though, AEW had a phenomenal month. Maybe it was the two-week losing streak they endured in July, but it seems like a fire has been lit under the show, with storylines peaking at just the right times, and performers putting on great matches with excellent finishes all around. Mox vs Allin was an absolute banger to start the month, Orange Cassidy vs Chris Jericho was a huge hit a week later, and FTR vs Private Party was tag team *mwah*. I know those are just individual matches and we’re supposed to be considering the whole card each week, but those are the highlights. In truth, both shows have at least one match that’s worth watching twice, but AEW tends to have more must-see stuff going on around those top matches, like the Jungle Express vs Hangman/Omega tag match, or the Cody vs Brodie Lee title match, or any of the segments between Mox and MJF. AEW feels like a weird blend of 90s Raw, pre-Russo Nitro, and, oddly, Chikara. NXT feels like it’s just trying to figure out how to keep up. 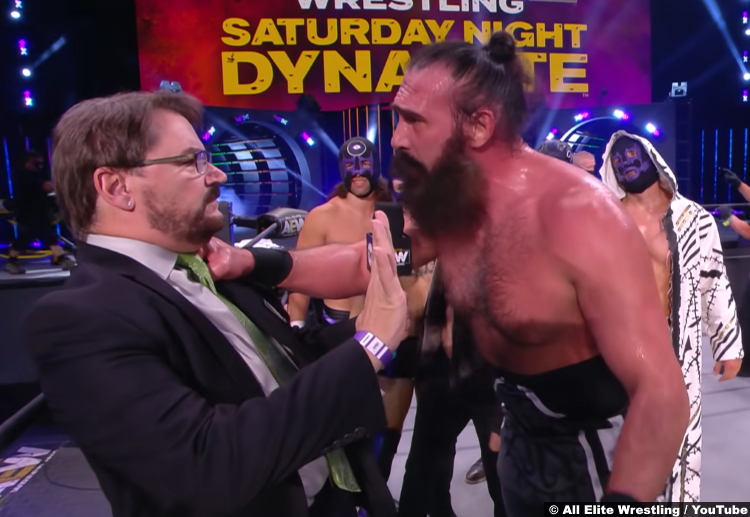 Brodie Lee vs Cody takes it alone. That match was legit-shocking. It was a pure squash and title change with the loser being one of the most protected performers on the show. That’s how you do a title change: Make it after a long run, with a protected champ, and a new title-holder that has a purpose and enough talent to keep the belt legitimized.

On the opposite side, the return of Velveteen Dream (and subsequent “what problems? No problems.” response by Triple H to the complaints) earns negative points. There’s simply no reason to handle that the way they did. It’s not even a matter of “did he actually commit a felony” because that part is at best still TBD. What gets me the most, at this point and time, is the caviler attitude in bringing him back to work as if nothing ever happened. Triple H even tried to shrug and say he had been away because of an injury. It bothers me because, for many other performers, just the accusation would be enough to get him yanked from TV and kept out of sight until everything was either resolved or he was fired. Instead, because Dream was (a year ago) a hot demographic draw, he’s allowed to wrestle and compete for titles as though he hadn’t been accused by multiple people of soliciting and/or grooming a minor. So that’s a negative surprise, giving AEW the win yet again.

It’s been a while since we’ve had a clean sweep but AEW earned it in August. The company is a week away from their biggest PPV of the year and they’re hitting on all cylinders exactly like you’d want them to as they approach All Out. NXT on the other hand feels like they’re entering into a rebuilding phase, with Keith Lee now moved up to RAW and a new champion needing to be crowned all over again. September should be interesting, as we deal with the fallout of All Out and see who NXT decided to put the belt on to carry the company and, they hope, score a few more wins over AEW for a change.