Perry Mason isn’t a comedy, obviously–the series started with the murder of a baby–but it’s hard to beat the comedic reveal that kicks off this episode. Perry and Pete have invited coroner Virgil (Jefferson Mays) to Chez Mason.

And poor Virgil, he’s thrilled that he gets to hang with the cool kids. But then they take him down to the basement and the real reason for his invitation is revealed. Lmao, they stole George Gannon’s body. 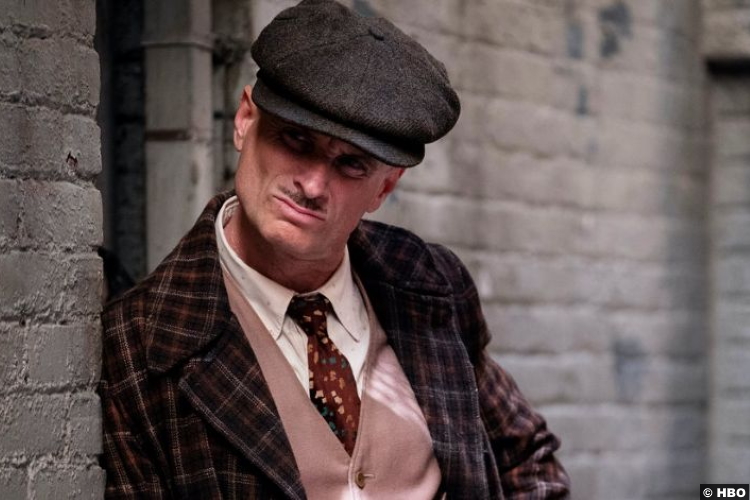 Unsurprisingly, Virgil is appalled. They want him to do another autopsy, so they can prove that Gannon’s death was murder. Virgil refuses and I don’t blame him. Besides the obvious part–how would they ever be able to use that as evidence?

So they dump it on a golf course later, so Virgil will have to autopsy it. And in the meantime, they pursue their fourth man theory. Once they retrace the Dodsons’ steps, retracing the kidnappers’ steps at the same time, it’s clear that just three men couldn’t have done it. Well, they might have been able to, but it would have been very unlikely. A perfect marvel of planning and timing.

And as we’re talking about guys who fatally bungled the kidnapping of a toddler, I don’t think they could have pulled it off. On that note, where are we on the question of Charlie’s death? Part of me thinks it wasn’t intentional, that it was (supposed to be) a genuine ransom for cash. But I’m torn because I can also see it as part of something bigger. What do y’all think?

Back to the show. As they’re brainstorming, they start thinking out loud about escape plans. Whoever grabbed the cash the Dodsons left could have a) gone charging out the front of the building, straight into crowds, a screaming Mrs. Dodson, and police on the way or b) gone quietly out the back. The best option seems obvious.

So like Officer Drake at the apartment building, they follow a getaway route. That leads them to a skyway, which connects the hotel with the Elks Club next door. There, the club is having an auction, as well as a kids’ recital. And wouldn’t ya know it, Detective Ennis is a member. Perry tries to rattle him, but he doesn’t break.

Of course, Ennis could have predicted something like this coming. Earlier, EB had gone to Maynard, purporting to have information on the fourth man at the scene. Instead of being grateful for this help in the pursuit of justice, though, Maynard simply threatened him. He could either make Emily take a plea or go to trial and be disbarred. (Apparently, EB siphoned money from client accounts. He says he paid it back, but still.)

Afterwards, Maynard confronts both Ennis and Holcomb, wanting to know who killed Charlie and what’s the deal with the fourth man? They tell him they have it in hand, but do they? 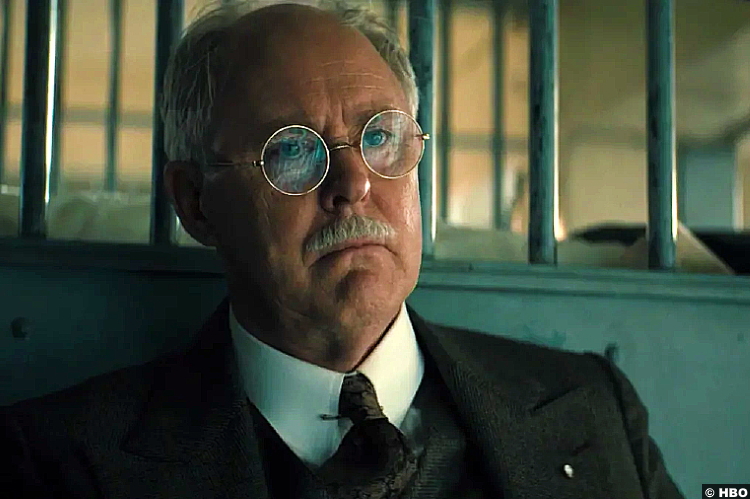 At the same time, EB is also shaken. Things are just not going his way. I said last week that something was going on with him, and this week, I think it’s just age. He’s just not as sharp as he used to be, not to mention it’s like the walls are closing in on him. Not only is there a threat about his past indiscretions, but he’s also not doing so great at the moment. The firm is basically underwater and he can’t get a loan from his bank to spring Emily. He also can’t really prove that Emily didn’t conspire with the kidnappers, especially not now that Matthew is testifying against her.

So while Sister Alice is confounding the church elders and provoking the more unstable members of the public, EB visits with Emily. He tries to talk her into taking the plea deal–20 years. But she’s so pitiful that he can’t do it. Instead, he tells her that she’s going to fight.

But it looks like the fight has left EB. The next day, he gets up and goes through his morning routine, like filling his hummingbird feeder. Then he turns on the gas in his oven and sits down. And he watches a hummingbird, as the gas fills the room.

8/10 – With EB’s hope “vanishing like the blush of innocence,” I completely forgot to mention that Chubby Carmichael found Perry and kicked his ass. And obviously, I didn’t go into great detail about Alice’s plotline. These episodes are so overstuffed–in a good way–that it’s hard to fit it all in without going on for pages. But this episode, in particular, belonged to John Lithgow. I knew he was great before this, obviously, but it’s always pleasing to get a reminder of how good. And the same goes for Gayle Rankin. Some of y’all might not be familiar with her–watch GLOW–but the scene with her and Lithgow in the cell is exquisite.