In considering the kidnapping and subsequent murder of Charlie Dodson, one thing you can’t help but consider is the question of why. As in, why was this baby kidnapped? The Dodsons seem to be doing well enough for themselves, yes, but not in a way that would signal they have loads of money. Well, that question is answered as a secret is revealed this week.

But first, some administrative business. I mentioned this in the comments for last week’s episode, but I wanted to make sure it was clear this week, too. While both detectives, Holcomb and Ennis (Andrew Howard), are crooked, it was Ennis who killed the kidnappers in the apartment. Well, almost. But I’ll get to that shortly. 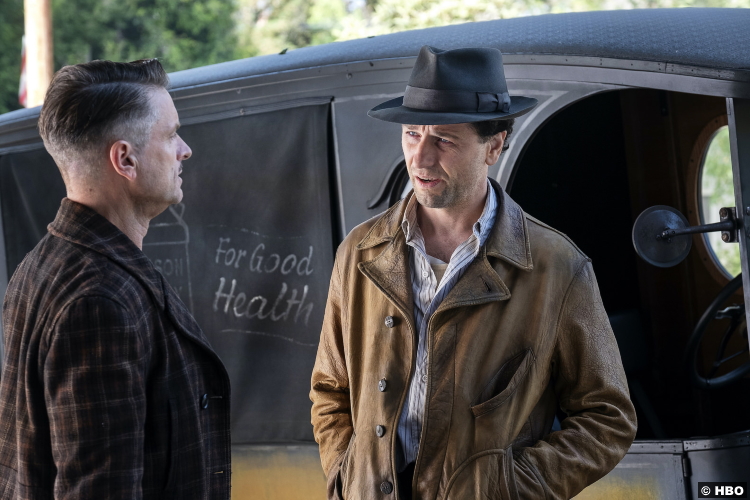 Before that, though, let’s meet the Radiant Assembly of God’s pastor, Sister Alice (Tatiana Maslany). Like Sister Molly on Penny Dreadful: City of Angels, she seems to be drawing direct inspiration from real-life evangelist Aimee Semple McPherson. We meet her when she and her mother Birdy (Lili Taylor), along with a few church members–including Herman Baggerly–meet with the Dodsons.

Sister Alice assures them that they’ve been in her prayers, while Baggerly assures them that the church will cover all the costs for Charlie’s burial. Generous as heck. However, this touching moment is interrupted by Holcomb and Ennis, who say they need Matthew for a line-up at the station.

Instead, Matthew is arrested. The detectives have a witness who will testify that they saw Matthew at the house the night of the kidnapping and he was carrying away a bundle. And as for why Matthew would stage a kidnapping and ransom himself his own money, therein lies the secret. Matthew, a gambler as it turns out, might not be sitting on a mountain of money. But his biological father, Herman Baggerly, is.

Unsurprisingly, this reveal goes over like a lead balloon–which were probably in wide release then. E.B. Jonathan is shocked, but Perry is furious. Baggerly defends himself by saying that they weren’t exactly open themselves–they didn’t mention f’rinstance, that Perry left the military with a blue ticket.

And while it’s true, like Baggerly said, that blue tickets were used as an easy way to dismiss Black and gay soldiers, that’s only bait. The clear implication, especially with the reference to Perry being “The Butcher of Monfalcone,” is that he was kicked out because he has snakes in his head.

And while that may be true to an extent, we see in flashback what happened and what could have been easily misinterpreted. He did kill his men–men that were dying slowly already and men that would have suffered worse fates had he let the gas take them. And I’m sure scarcely a day has gone by since then that he hasn’t thought of that moment. 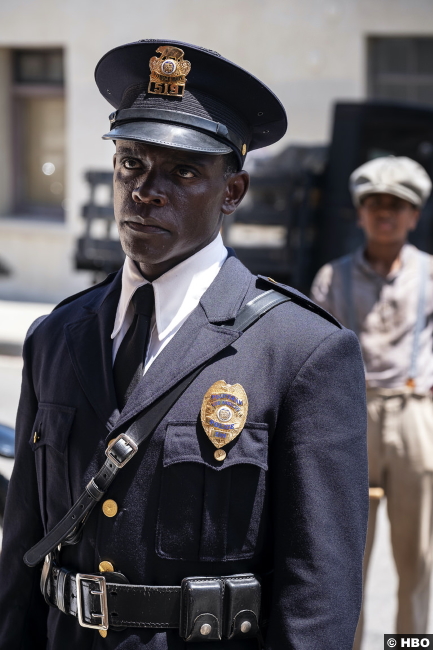 Around the same time, a patrolman, Officer Paul Drake (Chris Chalk), is attending to a domestic disturbance. It’s really more confused than malicious, so he quickly has it in hand. However, someone else on the scene wants to show him something. That guy leads Drake to the apartment with the dead kidnappers. Drake follows a blood trail from the apartment to the roof, where it disappears.

Obviously, he calls this in but runs into an issue when he’s typing up his report. After Holcomb and Ennis have a condescending chat with him, his boss forces Drake to change his report. (Incidentally, in the Perry Mason canon, Paul Drake goes on to be a private investigator himself, as well as a close friend of Mason.)

After Matthew’s arrest and the blow-up with Baggerly, Perry speaks with Emily. He pays close attention to that turtle, which is a souvenir of the Los Angeles Alligator Farm. He doesn’t get much from her, but a neighbor tells him that it’s no wonder she didn’t notice her baby being taken, because she was on the phone all night. 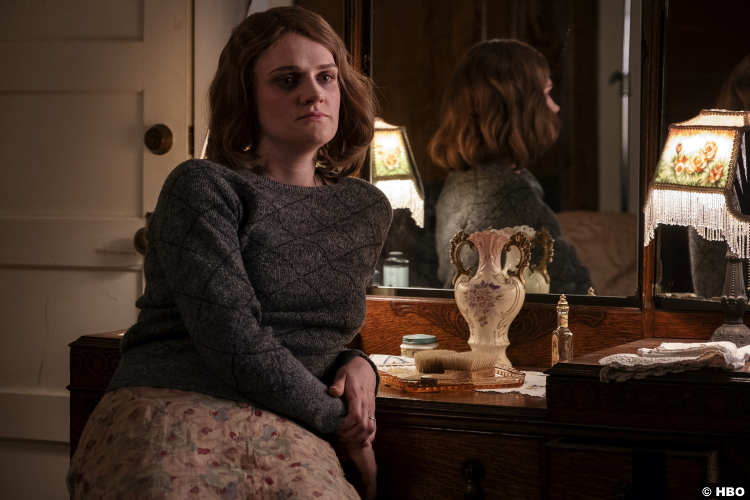 Later when Emily uses a public phone, Perry gets the address of the number she was trying to dial and goes there. Outside, a dented vehicle matching the description of the getaway car. Inside, a dead guy with his face blown off. Perry finds half of a dental prosthesis in the guy’s mouth and a typed suicide note next to the body. More importantly, though, he finds a taxidermied gatie, also marked with a sticker from the LA Gatie Farm. The belly has been slit open, the better to store secret letters from Emily Dodson.

So of course, Perry confronts her with them. She insists that the man, George Gannon, is a friend from church. She won’t budge, even when Perry tells her George is dead. And although his new theory of the crime–George was carrying the bundle out but also talking to Emily on the phone?–doesn’t hold water, Perry seems unmoved.

Until after a fire and brimstone sermon at Charlie’s funeral, when Emily Dodson is arrested. And I mean right after the funeral–she’s still within sight of her baby’s coffin. Perry looks a bit ashamed about this, even though it was him and E.B. who turned her letters over to the cops. 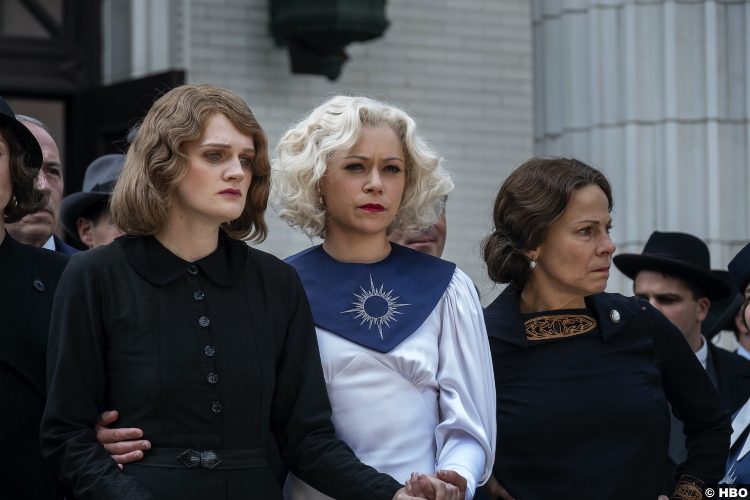 And as Drake returns to the crime scene and finds the other half of the dental prosthesis, Perry now has second thoughts. He’s repeating what E.B.’s secretary Della (Juliet Rylance) said earlier, that “[I]nfidelity is not murder.” But the letters, along with an alibi Pete found, have cleared Matthew, their main goal. E.B. concludes, “We do what we don’t like when there’s a greater good to be served.” Yeah, tell that to the Perry Mason who’s still stuck in Monfalcone.

9/10 – This episode was packed full of goodness from the beautifully-filmed war flashbacks to Stephen Root’s turn as Los Angeles County’s DA. Yes, this is not your nana’s Perry Mason, but that’s okay.