As this (lengthy) look back at Battlestar Galactica draws to a close, I can’t help but reflect on Ron Moore and co.’s ability to balance several big-picture ideas, any one of which would be enough to build a whole show around. At the same time, it didn’t just settle to cover ground other shows had done but went where few if any science-fiction shows had. In fact, I’ll go so far as to say, in one area, no other sci-fi show has touched what BSG did, before or after. In that case, I’m talking about, to quote the characters of the show, “God, or gods, or the gods, or whatever you want to call it…”

Now, obviously, science-fiction is not a genre afraid to talk about religion. Typically, however, the talk is slanted from the atheistic viewpoint: There is no “God” or “gods” or “higher power.” A movie like Contact is rare for the way it walked the tightrope between faith and science, disrespecting neither along the way. Contact is the exception that proves the rule, though. 99% of the time when religion is viewed through a sci-fi lens, it’s done with either the wink-and-nod of the author or the explicit statement by characters in the story that there is no “god” and anyone who thinks otherwise is a primitive ignoramus.

I always felt it was a missed opportunity for sci-fi writers to acknowledge the idea of a higher power, especially through the prism of Arthur C. Clark’s fantastic one-liner:

Any sufficiently advanced technology is indistinguishable from magic

If that’s true, then why not a story that considers “God” or “gods” as a sufficiently intelligent being capable of creating life from nothing? Maybe there are sci-fi stories that do just that and I’m forgetting them; I dunno, maybe I’m thinking too much of the way Star Trek approached the idea, which was from a humanistic standpoint (DS9, of course, played around with the idea that “gods” could just be aliens).

What I do know, however, is that Battlestar Galactica dared to make “God” more than an idea to consider. BSG made “God” an actual, living character in the show, even at the risk of the criticisms (which did ultimately come their way) of “Deus Ex Machina.” If you’re not familiar, that’s Greek for “god from a machine.” The idea dates back to the stage plays of the ancient Greeks. They would devise stories where their heroes were backed against the wall with all the odds against them and no hope of escape only to miraculously be aided by the gods. The gods would descend “from the heavens” to save the day. In actuality, the actors playing Zeus and Athena, etc, would be lowered by rope-and-pulleys. Thus, they would literally be “gods (lowered) from a machine.”

Now, to be fair, the number of times when “God” in the BSG universe actually saved the day at the last second, is noticeably few. If you’ve watched the show as many times as I have, try to think of the times when God—not a human or Cylon character in the show—actually swept (swooped?) down from the heavens to stop the proverbial bullet from hitting the hero in the proverbial chest. 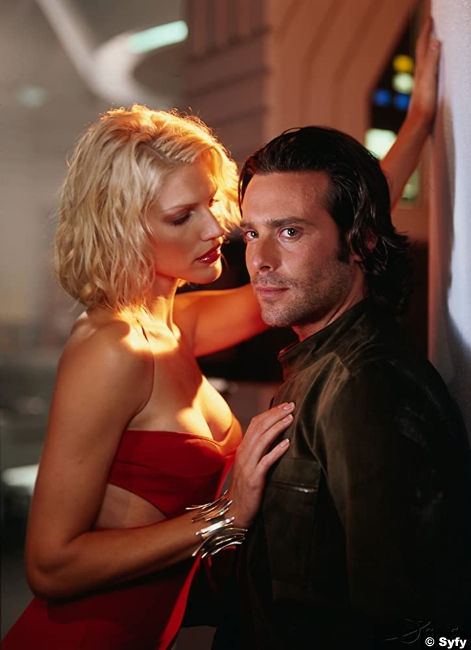 Think of it like this, in “The Hand of God,” Baltar points out the location of a spot to target in the Cylon base, a spot he picked seemingly at random, and yet his finger fell, guided by the hand of God, on the exact right spot needed to be destroyed. Is that Deus Ex Machina? I’d argue no, because Lee still had to pilot his viper to that spot, doing some incredibly dangerous and foolhardy flying along the way. God wasn’t piloting that ship; Apollo was. Apollo blew up the target, Baltar pointed it out, and God worked in the background “helping” along the way.

BSG is loaded with examples like that; times when God guided people somewhere, revealed important information, and helped passively. And, as said, there are even times when God helped actively, but not (if not very rarely) in such a way to stop someone’s actions from having its natural consequence. In that case, it’s not really a show riddled with Deus Ex Machina at all.

That being said, if any show was to be guilty, wouldn’t it be fitting for it to be the show whose own mythology contends that Zeus, Athena, et al, were actual living beings? That’d at least be consistent, no?

I think Moore’s naked willingness to make God a character in the show, and the way God’s hand factors into the finale, is the key reason BSG has not taken its place alongside other “greatest shows ever produced” like The Wire or Breaking Bad. Nevertheless, controversial as it may have been, and continues to be, I will whole-heartedly defend God’s inclusion as a character and the way the Work of God was explored as one of the themes of the show.