Since Elsa struck out last week in her attempt at getting Maria out of the house, she tries a new tactic this week. And by that, I mean that she employs the non-charms of her repellent descendant. 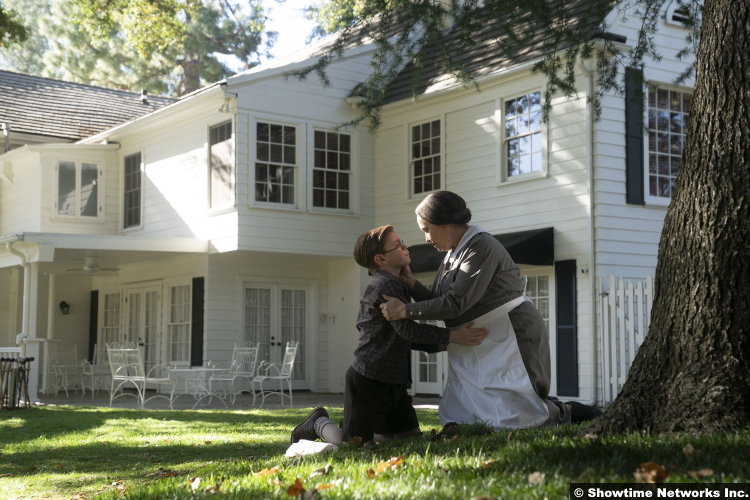 I’m really not sure how she thinks this is going to work. Maria has proven herself to be pretty unflappable. She’s not as sensitive, for instance, as Tom Craft (Julian Hilliard), who confides in her that Frank killed his hamster, Friar Tuck. She tells him not to tell anyone else, but she gives him her coyote talisman for protection.

And then Frank tries to work his evil magic. At the same time, Elsa just works evil. When Josefina stops by the house, for example, to tell Maria that she’s moving into the temple’s dormitory, Elsa sees them talking. So she tells Maria not to speak to Mexicans at the Craft house, lest the neighbors see. Even in the 30s, I’m not sure why the neighbors would care, especially if they knew Maria was the housekeeper–and Josefina hardly looks like an unsavory character–but of course, it doesn’t matter. It’s just a little power play.

It’s the same as when she brings up coyotes, which she claims she heard in the night. She goes on about what dreadful little creatures they are, which is just factually incorrect. I know–I often hear them laughing when I’m at my office. (They’re laughing because they don’t have to work.) 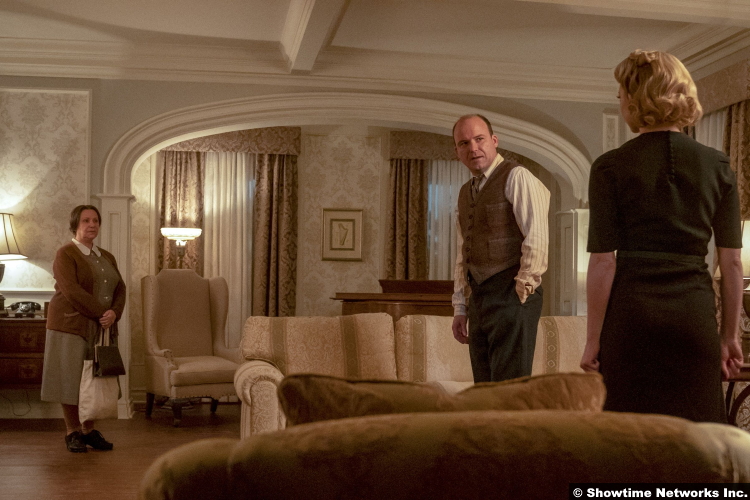 But none of it works, even when Frank tries to torment her by appearing as her late husband. Although it’s traumatizing watching a recreation of his death, she’s still a tough lady. So Frank–who again is not a real child or even a real anything–pulls out the big guns. He slaps his hand down on a hot stove eye, obviously burning himself, just as Peter and Elsa return from their night out.

Again, I’m not sure what this is supposed to do, especially for Peter’s benefit. Maria is like, ten feet away from the kid and he seems old enough to know not to touch a hot stove, so I wouldn’t see this as her fault. And I don’t think Peter does. Actually, to be honest, maybe this is my own bias, but I don’t think Peter really cares for Frank all that much.

Besides, he’s already got so much on his plate. First, he’s got the Linda issue. When he visits her at the sanitarium, she tells him that she’ll go along with the divorce, which her father and his attorneys are now handling. But as soon as she’s free of Peter, she plans to devote her life to ruin his. She keeps describing him as a fraud and I keep hoping this will pay off.

Because he does confess a little duplicity to Elsa, but it doesn’t seem like the kind of thing he’d get panicky about. And that is the expression he has whenever Linda threatens him–panic. But anyway, his night out with Elsa is actually a Bund meeting. Ackermann is pushing for the Bund to become more aggressive, the same way that that little upstart Hitler is pushing actual Germany to become more aggressive (boy, I’ll say!). Peter, however, argues for restraint. Elsa has his back at the meeting, but on the way home, she tries to shame him.

She says that she actually agrees with Ackermann, but she felt obligated to support Peter. But he was embarrassing. That’s when Peter tells her that his real surname isn’t actually Craft. He’s actually part of the (real-life) Krupp family, who made weapons for Germany for over 400 years. However, then he worked as a medic during WWI. Sick about being responsible, even just by blood, for so much shedding of other people’s blood, he changed his name and hid his identity. Hmm.

Okay. I’m really not sure what Peter thinks the Bund is for, then. I mean it’s literally for promoting Nazi Germany, but Peter seems to behave as if it’s just culture club. And I get that, to an extent–half my heritage is German, if you haven’t guessed that already, and I LOVE GERMAN CULTURE. But there is a big swastika-ed elephant in the room, and you can’t just wish it away with toasts and Mahler and fond memories of lederhosen or whatever.

Maybe he’s hiding a bigger secret than that. Again, that just doesn’t seem like the kind of secret you’d be terrified of people finding out. But I don’t know. I did laugh, though, when it seemed as if Elsa had pushed him toward firing Maria and then he offered her a raise. 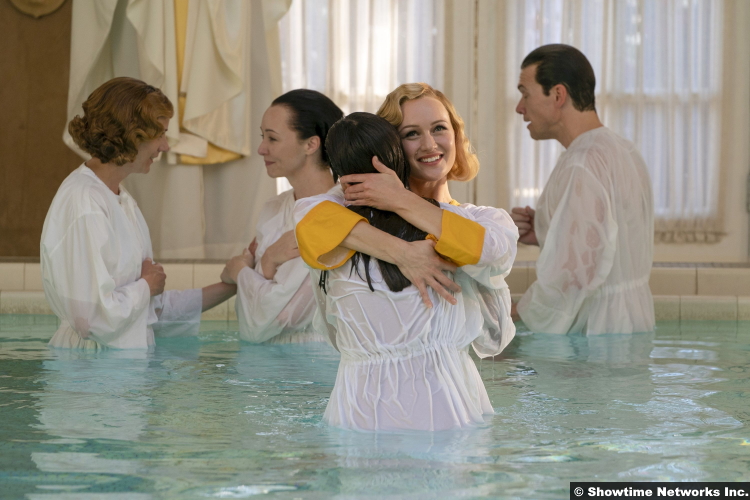 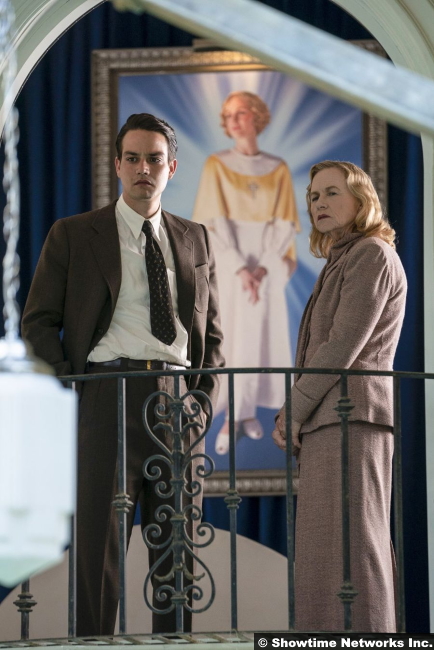 Meanwhile, Tiago and Lewis are still digging into the meeting they saw last week. They’ve figured out that it has something to do with the future of Los Angeles, especially with the Via Hermosa roadway, but they don’t know how exactly.

At least Tiago knows about Josefina and the temple now, though. And although he plays angry, I think he’s not finished with Molly yet. But how does she fit into the Via Hermosa plan? More importantly, at least at the moment–who just tried to kill Tiago and Lewis? 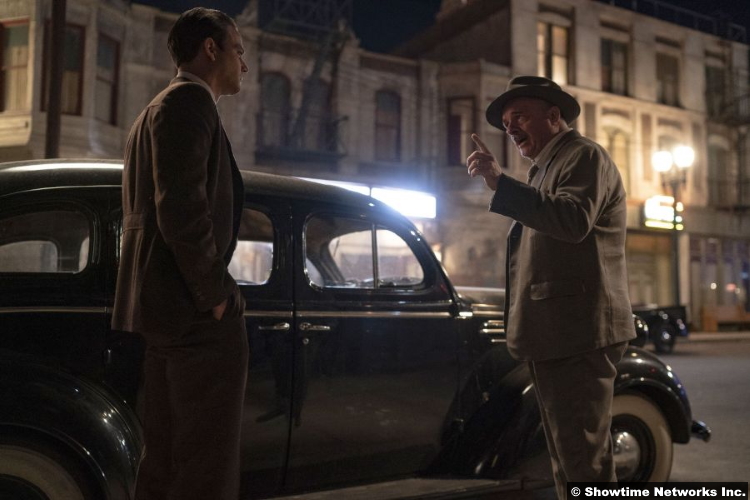 8/10 – The pieces all seem to be coming closer together, but I still have no idea what the theme of this season is. There seems to be a theme related to families–the Vega family, Craft hiding his real roots, Townsend building his career only because of his–but what is the show trying to say? Or is that all just part of Magda’s plan to turn brother against brother, but literally?