Killing Eve S03E08 Review: Are You Leading or Am I? I can’t fathom it…

In a previous episode, Eve had wondered what exactly Carolyn had talked to Villanelle about, way back when they met her in that Russian prison. (That feels like decades ago.) Carolyn said that she’d offered Villanelle a job, but you know how Carolyn is. She’s not always generous with the full story, so it wasn’t clear if that were true or not.

Well, it turns out it was. And Villanelle hits Carolyn up to see if that offer is still standing. 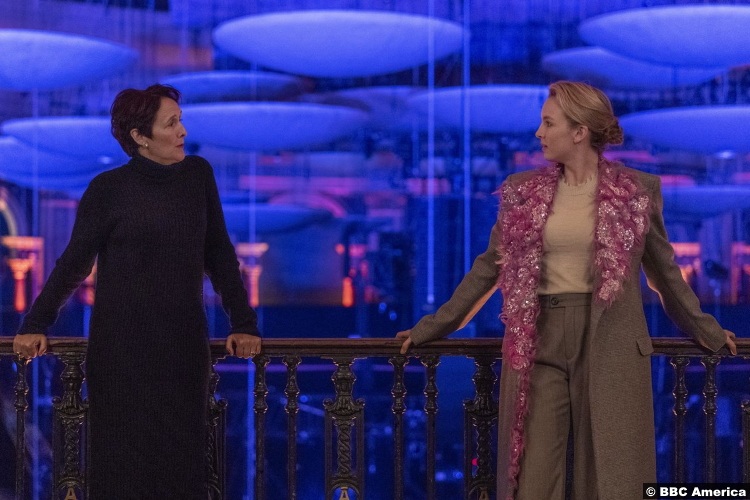 At their meeting, Villanelle finally edges closest to the thing she’s been dancing around all season. She doesn’t want to kill anymore, at least not for a living. She thinks she’d like to try being a spy. But of course, her idea of spycraft is all movie stuff–disguises and whatnot. Basically, what she did last season. I don’t think she’d be able to handle the day-to-day work of MI-6, like data entry and analysis.

But in any case, it’s a moot point, because Carolyn doesn’t want her for a spy. She wanted her for an assassin, and since she’s not interested in that, she’s now “useless” to Carolyn. 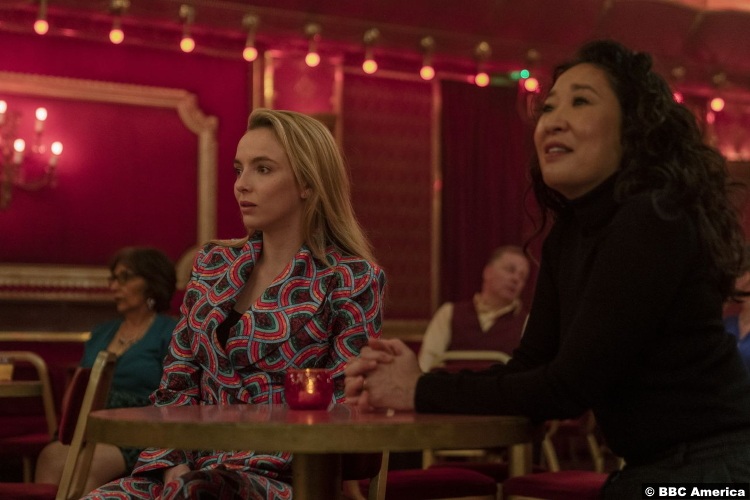 Rudderless, she ends up in a dance club that seems like it’s been frozen in amber. Eve meets her there and they sway together amidst all the other couples. Their reverie is broken, though, by Rhian’s appearance.

She’s been sent to fetch Villanelle for Helene. Villanelle goes willingly, but she can’t go along with Rhian’s philosophy that they’re sheep. And Rhian, despite her training, can’t see danger right in front of her. When Villanelle pokes her, figuratively and literally, she flies off the handle and attacks her. But Villanelle isn’t a sheep and she attacks back.

What follows is a strange death. They’re underground, waiting for a train, and Villanelle ends up pushing Rhian onto the tracks. It seems as if she has plenty of time, but she just lays there until the train arrives, crushing her out of existence. I’m not sure what they were going for here, because honestly, it came off like the steamroller scene in Austin Powers.

Yes, like that. Meanwhile, back at Bitter Pill, Bear has had a breakthrough with Kenny’s death, so they invite Carolyn to share what he’s found. Apparently, Bear had noticed that someone had been pilfering his Tangfastics. So he set up a hidden camera to find the culprit.

Not only does the camera reveal that Kenny was stealing his gummies, but it also shows Kenny’s visitor the day he died. During Carolyn’s conversation with Villanelle, she had asked her who killed Kenny (you bastards) and who killed Mo. Villanelle claimed ignorance on both fronts and I think she was telling the truth. I don’t even think she knows who Mo was.

But anyway, after seeing her reaction, I guessed the only person I thought it could be and I was right. Konstantin visited Kenny that day. 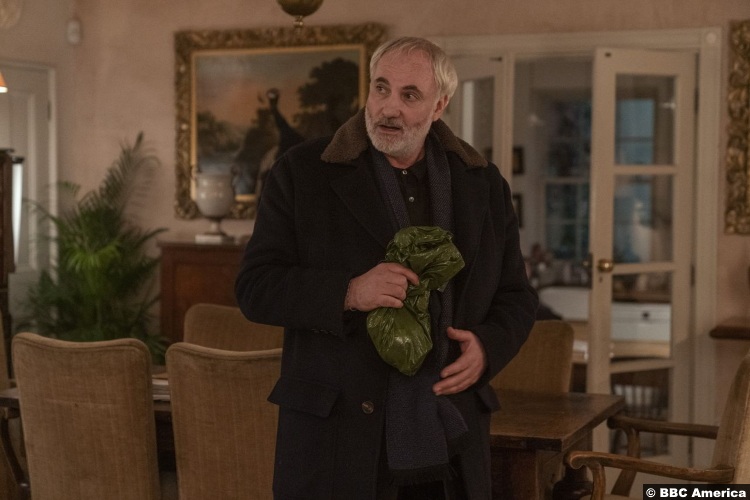 Konstantin denies killing Kenny immediately. Yes, he was there, but only to offer Kenny a job with The Twelve. He claims that Kenny kept trying to back away from him, until he’d backed himself off the roof.

Carolyn makes like she’s going to shoot Konstantin, but at the last moment, she shoots Paul instead. Then she lets Konstantin go. Why, though? I’m trying to think of a reason that isn’t “because he’s such a good character,” and I’m coming up empty. But at least the show solved one of my issues from last week–why the show needs two people who essentially serve the same purpose. And by that, I mean that Dasha dies.

As they walk together along the bridge afterwards, Villanelle and Eve realize that they actually killed her together. How romantic. Villanelle suggests they walk away from each other and they do, but they each turn back before they separate forever. And that’s how the season ends, with them both standing on a bridge looking at each other.

8/10 – While this was a decent episode–Fiona Shaw just bodies every scene she’s in–once again, I’m left dissatisfied by the season as a whole. Like, what exactly was the point of Geraldine or her plotline? Why so little Eve in a show called Killing Eve? I can’t fathom it.