Killing Eve S03E05 Review: Are You From Pinner – Time to meet the family…

Some people might find the show’s decision to pump the brakes so soon after Niko’s murder (attack) incomprehensible. I’m not sure if I’m one of those people. Like seemingly so many things I watch lately, I think this episode is growing on me.

Anyway, as we saw last week, Villanelle had made her way to Russia by episode’s end. At this episode’s beginning, she’s just chilling in a house, much to the consternation of the family who lives there. They don’t know who she is and she doesn’t know they are and it isn’t until Pyotr (Rob Feldman) comes in that anyone knows what’s going on. 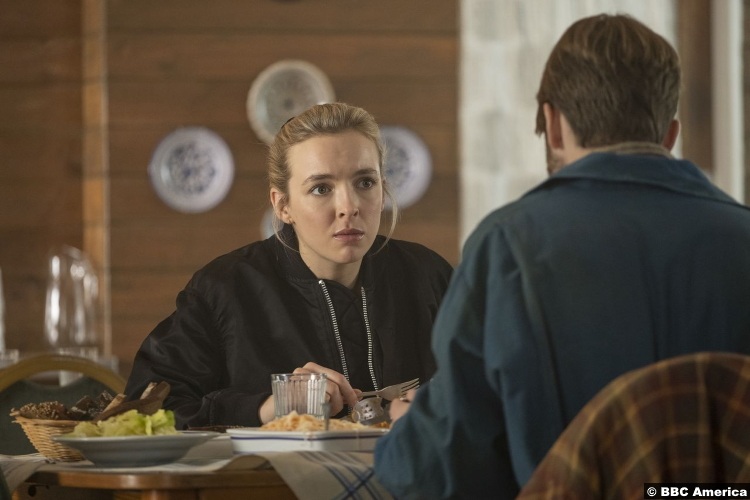 Pyotr recognizes “Oksana” immediately. It’s his sister, the same one he was told died when they were children. His reunion is joyous; his sister’s, a bit more muted. But it’s not him she’s really worried about. It’s her mother, which we can see from Villanelle’s reaction. As she waits for her mother to enter the house, she damn near has a panic attack.

Obviously, that’s curious in and of itself. What kind of person would make Villanelle so nervous?

At first, it doesn’t seem as if there’s anything weird here, beyond the obvious. Her mother bursts into tears, crying about her baby returning. But then the cracks start to show. 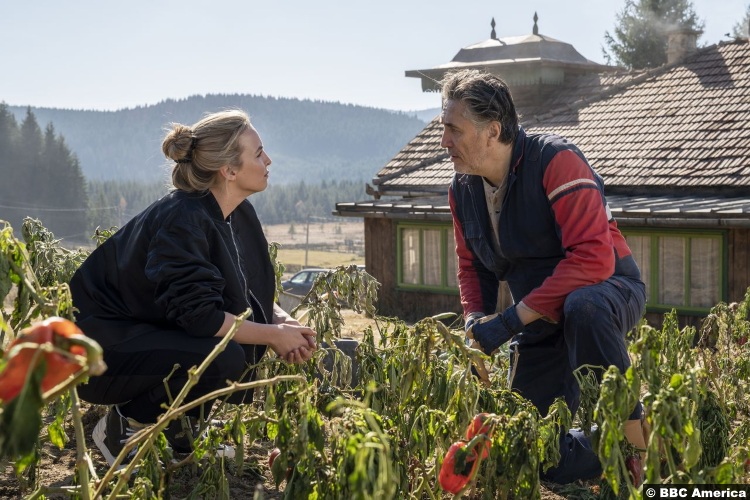 You can see it, for instance, in the way Villanelle questions Grigoriy (Predrag Bjelac) about his relationship with her mother, Tatiana (Evgenia Dodina), almost as if she’s questioning what he sees in her. And then the story everyone’s given about what happened in Villanelle’s childhood just doesn’t pass the smell test.

She was taken to an orphanage, first of all, which is weird because she’s clearly not an orphan. Then she was told her parents had died in a car accident, while they were told–according to Tatiana–that little Oksana had died in a fire of her own making. Wow, that sounds like a metaphor that is very on-brand for Villanelle’s life in general. (I know Villanelle acknowledges the fire story is true; I’m just not sure I buy that they were told she died.)

Nevertheless, the more time Villanelle spends with her would-be family, including her stepbrother, Fyodor (Dimitrij Schaad), and his girlfriend Yula (Natallia Bulynia), and little Boris (Temirlan Blaev), you can see a kind of settling. It seems like she’s maybe deciding if she could make a place for herself here. Sure, it’s kind of slow and the biggest local attraction is the fair (at which Villanelle wins the dung-throwing contest), but they are her family. 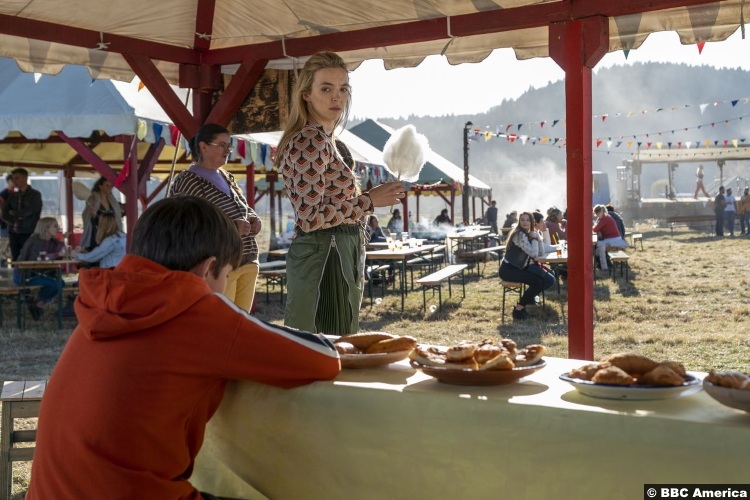 She’s particularly soft with Boris, or “Bor’ka,” her half-brother. Once he finds out she speaks English–she stubbornly refuses to speak Russian–his thoughts go immediately to Elton John, as ours all do. Bor’ka is a huge fan of Elton’s and would love nothing more than to see him on his farewell tour, if he could scrape up the rubles. (Hang on, let me run it through the currency converter. He said 60k rubles, I think? That would be ’round about 817 US dollars or 658 pounds.)

In the meantime, though, he’s content just to hear Villanelle talk about where to eat in each city in which Elton has played. And she seems content back, even if she is a little weirded out by the family’s post-dinner “Crocodile Rock” performance.

But nothing gold can stay and neither can Villanelle. Without much prompting, unless you consider the waste of a bit of tomato paste a prompt, her mother insists that she leave. This isn’t Villanelle’s home. And while her mom claims that they sent her away because her father was concerned she’d hurt them, I don’t think I buy that. We already know that Tatiana is particularly cruel to Bor’ka, for instance. The boy hits his head against the wall to punish himself. And then there’s the way Pyotr beats an old sofa, so he won’t beat people. Maybe it’s a corrupted genetic line, or maybe they’re just all the children of an abusive woman. (Happy Mother’s Day!) 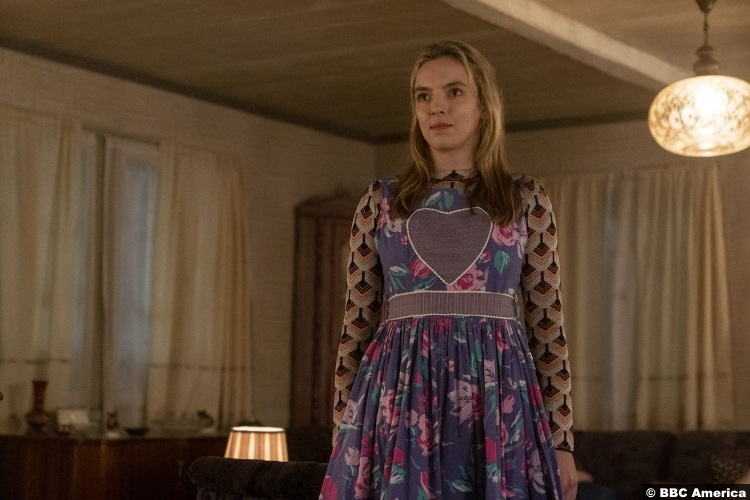 In any case, Villanelle reacts in a way that you might have been expecting from the start. She tells her mother that she thinks she has to kill her, and then she does. She also kills Fyodor, Yula, and Grigoriy, who are all sleeping as she blows up the house. However, she spares her brother Pyotr, who sleeps in the barn, and Bor’ka. For him, she sets an alarm. When it wakes him, he sees a note telling him to go to the barn for a surprise. There, he gets the money for an Elton John ticket and his life.

But what does Villanelle get? As she rides a train away, dressed in her mother’s 80s jumpsuit, she appears to be listening to music. She’s got her headphones on, after all. But is she really listening or is it just an excuse for her to shake? And shake.

8/10 – Okay, yeah, so I talked myself around. At first, I thought this episode was kind of a wrong step, a pause in the wrong place. I still think that a bit–we’re halfway through the season and I still have no idea what the overarching theme is–but at the same time, it’s interesting to get a look into what shaped Villanelle. I just hope it doesn’t spoil the mystique.