Between the religious themes this week and the geyser of red stuff we see, I couldn’t help but hum the hymn “Nothing But the Blood.” There is so much more to this episode, though.

Since this show’s plotlines haven’t been fully integrated yet, although I assume they will be at some point, I’m just going to touch on them by group. First up, the Bund bunch.

I had totally forgotten that Dr. Craft invited Elsa and her monstrous homunculus to his son’s birthday party. Anyway, they attend and she meets Herman Ackermann (Ethan Peck), Craft’s second-in-command in the Bund. (Before that, Ackermann had been talking about getting the Bund’s message out on the radio. Allegedly, most of the radio stations are Jewish-owned, so that’s gonna be a no, but other religious stations are a possibility. Y’all stay away from Molly!) 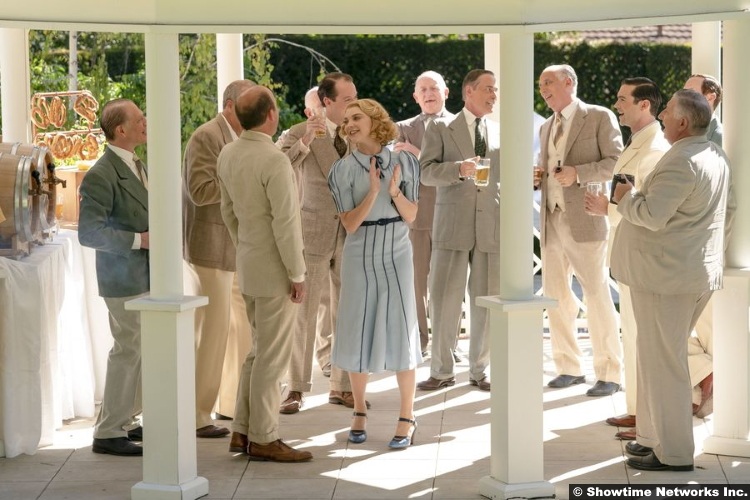 Elsa charms the Bund bunch with a rousing rendition of “Ein Heller und ein Batzen,” which also gets Linda Craft’s (Piper Perabo) attention. She may be as drunk as a skunk at like, 1 p.m., but she can see what’s going on. She warns Elsa away from her husband, but of course, Elsa’s a demon. Literally. So she immediately goes to seduce Craft. Later, her grotesque spawn will terrify the Craft children with a charming tale about a dismembered little girl. Can’t wait to invite Frank back for another sleepover!

And speaking of experiences I never want to have again, poor Josefina. She and Mateo are on their way home from the market when they’re stopped by that cop who threatened Mateo at the hospital. I choose not to learn his name ’cause he sucks, and anyway, by the end of the episode, it’ll be a moot point.

I think the cop would have hassled Mateo whether he was alone or not. But I’m not sure he would have bothered Josefina if she were alone. I think everything he does to her is for Mateo’s “benefit.” That is to say, he thoroughly gropes her, under the guise of checking for weapons. It is awful to watch, so if you’re one of those folks who read these before you watch the episode, then I would suggest you turn away. So does Jessica Garza, who plays Josefina.

Hi all, this a content warning for sexual assault in tonight’s episode of #PennyDreadful #CityofAngels. I want you all to enjoy the episode, but I want you to feel safe. If this is a specific scene you would like to avoid, there is more info in the image attached. Stay safe 🤍 pic.twitter.com/BjS7ZC61KM

After that, the kids are shaken up, obviously, and Josefina pleads with her brother not to tell their family. However, once they get home and everyone sees Mateo’s new pachuco tattoo and everyone’s screaming, Josefina tries to tell her mom. Her mom brushes her off, though, having had enough of her children at that moment, so Josefina wanders off in search of…something. 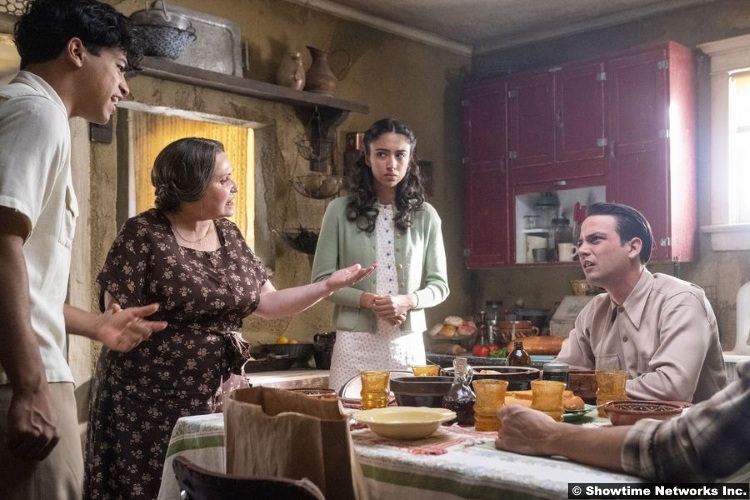 And she finds it, whatever it is she’s looking for, in Sister Molly’s service. As Sister Molly offers her catharsis, I couldn’t help but picture what it was going to be like later. You know, when Molly finds out this is the younger sister of the man she told to stay away from her earlier.

That, of course, came after Tiago went poking around the little love nest Mr. Hazlett bought for Molly. As she explains it, she just wanted a place she could go where she could be Molly, not Sister Molly. And then again, she got really angry and defensive with Tiago.

Having come to a kind of dead-end, Lewis meets with Benny Berman (Brad Garrett), an associate of Meyer Lansky. He wants gangster help with the growing Nazi problem. However, Berman’s been shunned by synagogues across the city, so he’s not exactly feeling very charitable toward his fellow tribe members. 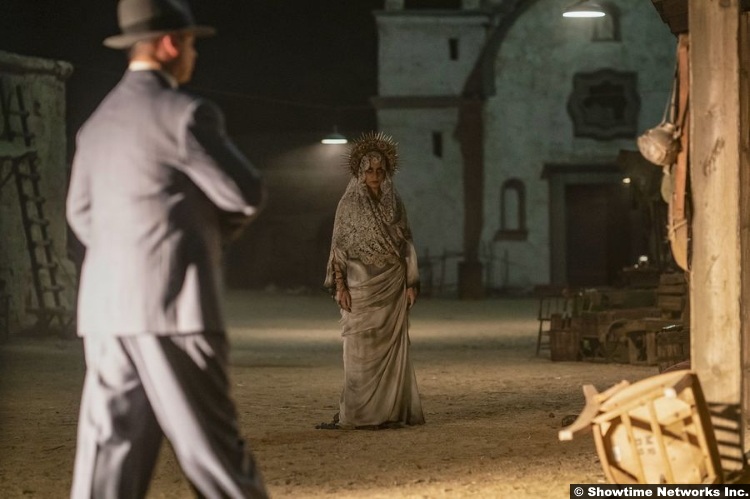 However, he finds out that another associate of his set up a hit in Ensenada, Mexico that killed a couple of their men (and a lot of Mexicans). It was all in service of running guns to the Nazis, so Berman is in. And there is precedent for this, by the way.

New York politician Nathan Perlman didn’t like the Bund rallies, but there wasn’t anything legal he could do to stop them. So he asked Meyer Lansky for help, and the legendary gangster was happy to do it. For free. Any time, any place, punch a Nazi in the face.

Whew, where was I? Oh, yeah. Blood. But first, Townsend is now sleeping with Kurt, which he doesn’t know is being 30s-filmed. Both are just a way to keep him in line. Now back to blood.

Licking his wounds with his pachuco pals, Mateo is still feeling stung about the encounter with the cop. Rio is there, so she helps him get them riled up to go. Go where? To just straight-up murder that cop in a very bloody scene. Oh, precious is the flow. They dump his body outside the police station, which is going to get quite a bit of attention.