April is the first full month we’ve had without a live audience. You read that right, both AEW and NXT were still running full shows in March.

May looks likely to repeat things but at least for now, we have a level playing field and a review on how both shows managed to settle into the new (hopefully, temporary) normal.

Both shows are let down by circumstances beyond their control, nevertheless, they have handled the change in different ways. I noted last month that NXT used to lead the way in production values, due to having the well-oiled machine of WWE’s decades of experience behind them. Remember when AEW couldn’t even get their microphones to work? Once the virus hit and crowds were banned, however, everything changed. The “paint by numbers” production that WWE has used since the mid-90s was no longer viable and since they knew no other way to shoot a wrestling show (again, they’ve been doing it this one way for twenty-five years), they struggled making their show look halfway-normal without a live crowd.

AEW, meanwhile, had the virtue of being too new to know what not to do. They changed the hard camera placement, ran more gimmick-segments, put wrestlers in the stands, used guest commentators, etc. They seemed to embrace the change as an opportunity to experiment, whereas NXT/WWE saw it as a burden to endure. The difference in mentality comes out, subconsciously, in the shows.

Now, with a whole month of April behind them, things have leveled out a bit, though that same difference in mentality persists. It’s hard to put my finger on, but as I’ve said before, watching WWE/NXT without a live crowd is like watching I Love Lucy without a laugh track or Star Wars without John Williams’ score. There’s a notable, obvious piece missing. AEW is missing the same piece but they are managing the change better. Maybe it’s the pacing, or the variety of content. I dunno, but I know AEW wins because they’re more watchable right now without a crowd.

Both shows had tournaments going on to provide some theme to the monotony of crowdless wrestling. On NXT they’ve had a cruiserweight title tournament, whereas on AEW a handful are competing for something called the TNT title. Without question, AEW wins this category. Even separating the tournaments and just looking at what else is offered, AEW just has much more going on, with more variety on display, and more reason to stay tuned in than NXT is offering (which is mostly the same show as always only without the crucial component of a live audience).

Granted, there have been some great matches this month on NXT but they are surrounded by far more crap than what AEW’s great matches have had. And AEW has had better “great” matches this month, too, with Allin vs Guevara II being the highlight. Those two will hopefully be feuding on and off for the next ten years. NXT had Mia Yim vs Jessi Kamea, which was a blast this month too, and not to be completely neglected, the yellow show this month has also highlighted the slow descent of Johnny Gargano and Candice LeRae into madness. Watching those two quietly going insane together has been a genuine treat. Keith Lee has been MVP of NXT but he’s not enough to counter the unbridled apathy I feel for “Charlotte Flair: NXT Women’s Champion.” On the other hand, AEW had an absolutely dreadful Mox vs Hagger match…but they also had Jericho slaying it on commentary. That breaks the tie. 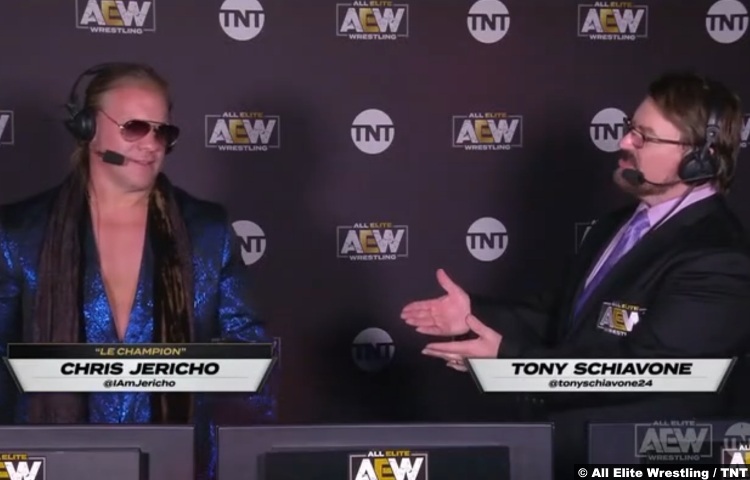 SURPRISES
WINNER: no one

Last month AEW won this in a walk, with Jake Roberts, Matt Hardy, Lance Archer, and Brodie Lee all debuting. This month the biggest surprise has been what may or may not have happened with Velveteen Dream, which I don’t even want to speculate about until the investigation has concluded. Still, if that’s your biggest bombshell the month was a slow one. And considering the circumstances, a slow month was expected.

Oh, and there’s the slew of firings that happened in the WWE hot off the heels of their being considered an essential Florida business. I have a whole separate article coming about that, though, so I didn’t include that here.

In short, nothing remarkable happened, and even if it did, if no one was there to cheer it…did it really happen?

AEW wins by default, edging by NXT on account of a better handling of the no-audience format and some better implementation of variety in their shows. Both companies put on strong cards but NXT still feels a step behind in putting on a watchable product without a live crowd backing them.

Maybe run stock-audio of crowd noise like in the old video games?

I dunno, I just want “normal” back.