Your SO OF COURSE preview of WWE Elimination Chamber 2020!

Your SO OF COURSE preview of WWE Royal Rumble 2020!

One-third of the PPVs that matter!

Drew McIntyre won the men’s Rumble in a genuine shocker of a finish. It was such a refreshing thing to see a fresh face stand tall and look poised to get a big push heading into the most important three months for the company each year. Of course, since this is WWE, Vince knows better than to give fans too much of what they want, so as a counter-balance to Roman Reigns not winning,  Charlotte won the women’s Rumble.

None of that matters though because neither of those people are on this PPV. What PPV you ask? Well I’ll tell you: Buckle up everyone because THIS is your SO OF COURSE preview of WWE ELIMINAT(E) ANY EXPECTATION IN YOUR BRAIN THAT THIS COMPANY IS GOING TO TURN THINGS AROUND AS LONG AS THAT DECREPIT TYRANT IS RUNNING THE SHOW BECAUSE UNTIL THAT CHANGES THINGS ARE GOING TO CONTINUE TRENDING DOWNWARD INTO THE ABYSS 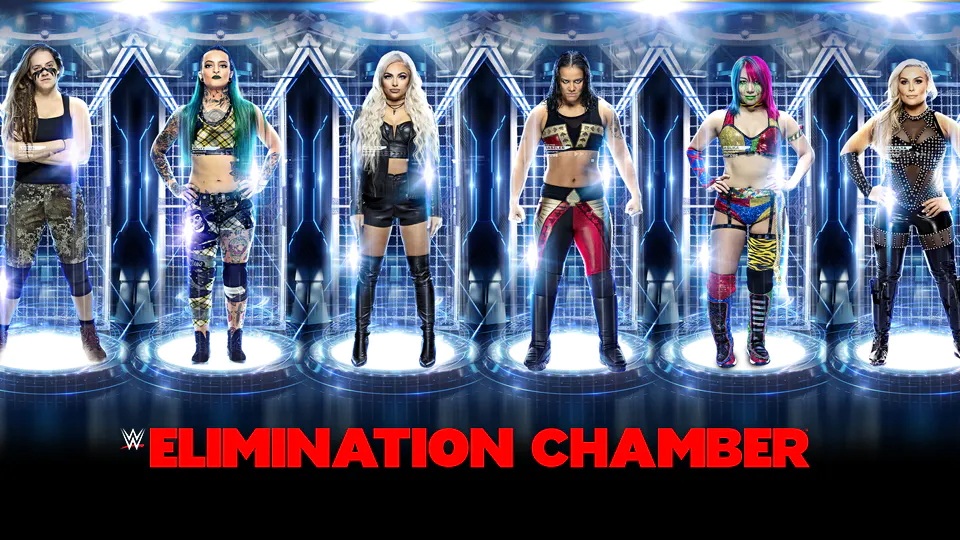 On to the show, and boy does it look like a waste of $9.99. Good thing these will be on ESPN+ in the near future, amirite?

Disclaimer: I write these previews on Wednesday night
but now that SmackDown is live on Friday’s
it’s possible I might miss a few last-minute match announcements.
Good thing the whole series is given as much care and consideration
by its writer as a WWE PPV …

Remember when this thing used to be such a special match-type? It was seen only when a bunch of contenders couldn’t break the parity between them and determine the true #1 Contender, so everyone was just thrown into a blender with the champ to let the chips fall where they may. Elimination Chamber’s idea was a great counter to Hell in a Cell, which always works best when it’s 1 on 1 in a blood feud. This is more about settling a bunch of mini-feuds that all orbit around the title. It combines the best of Survivor Series, the Royal Rumble, War Games, and a Cage Match into one awesome spectacle.

Now it’s so watered down, and has so-lost its specialness that the company has to run two of these every year just to get their money’s worth out of them. Do we need a tag team elimination chamber? No, but we don’t need literally any match on this PPV.

This entire show is superfluous.

What should happen? The champs should retain, if only because Mania is next up and John Morrison is still the newest toy Vince is currently playing with. He’s still fresh so they might as well get the most out of him before he becomes stale like the guys in the next match on this card. Champs retain and head to Mania to take on Heavy Machinery in a “who can burn out and stop drawing interest from the crowds the quickest” match.

Braun Strowman was almost the second coming of Big Show. Then the “creative” people at WWE decided to help him become what he was organically becoming. He’s dead in the water now.

Shinsuke Nakamura was a guy so charismatic, so effortlessly cool, so enigmatic, that—in the words of Dave Meltzer—“if they just let him be himself, he’ll be the best thing going. So naturally they had to fix what wasn’t broken and now he comes out to polite reactions in honor of what he once was.

Cesaro was this close to mattering, but that was WrestleMania 30 and it’s best to just pretend like he never picked Big Show up and walked him to the edge of the ring, dumping him over to win the Andre Battle Royal, looking like the strongest man on the planet.

Sami Zayn is not allowed to succeed.

At least they’re all in a match together, right? Maybe their collective “talent despite being micromanaged and/or ignored to death” will come together like a Jobber to the Stars Voltron and win the fans over all over again and earn Vince McMahon’s fickle appreciation once more.

Diet Rey Mysterio vs Rey Mysterio With Real Cane Sugar. Over/Under on time in the ring: 3.5 minutes. Then again, there are only six matches announced so far, and the two chamber matches (with promos, pyro and ballyhoo) will probably take an hour each, so they gotta stretch these last four matches across the other three frustratingly-long and boring hours, so maybe they’ll get ten minutes?

To be fair, it wasn’t exactly a banger match, but also to be fair, we literally just saw it, and boy is Vince in a pickle now. He’s got Black on one side, who desperately needs to be protected and already lost the previous match, but on the other hand, he’s got AJ Styles on his way to a probable Undertaker match, so he needs the win too. What to do? You’d have to get really creative with the finish if you want to please the fans who paid $9.99 to subscribe to your network.

‘Member when Seth Rollins took on Brock Lesnar for the title at WrestleMania and spanked him like a goober in 2.5 minutes?

THAT WAS JUST LAST YEAR.

One year later he’s struggling to get even “we still like you we just don’t care about how you’re being booked” cheers. He’s still getting the easy pops: Entrance music hits, top rope move, finisher. But in between, he might as well be D-Low Brown in 2001.

If you’re a superstar whose contract is about to be up, and Vince is promising you good booking as an incentive to stay, just look to Seth Rollins to see how well they know how to manage the wrestler’s they’ve tried to invest in as a long-term top star.

As for the match, I mean it’s the same match we’ve seen twice already. Considering it’s WrestleMania season, I would assume there’s something in the works for Seth Rollins and I don’t think it’ll be a match with (Buddy) Murphy, so I assume the Street Profits will retain. Hopefully that means they get a big spotlight on the biggest show.

This match will probably deliver, but it doesn’t change the fact that it’s an unnecessary step in the already-established feud between Becky Lynch and Shayna Baszler. It would be one thing if Shayna was the babyface chasing the heel champ. In that case, you want obstacles to build drama and anticipation. But when the heel starts a beef with the champ, you don’t run that feud concurrently with the heel trying to win the right to challenge for the title.

She should have earned the right by attacking the champ, because Becky’s a babyface fighting champ and they don’t back down from a fight, etc etc etc. So none of this makes any sense, especially when you consider the other women’s title has a very good reason to have an Elimination Chamber title-contendership match.

It’s stupid to pick anyone other than Shayna Baszler but this being WWE, I suppose I should always prepare for the needless swerve into the ditch of stupidity.