Your SO OF COURSE preview of WWE Royal Rumble 2020!

Your SO OF COURSE preview of WWE TLC 2019

the December PPV. Five bucks says you can’t remember the main event. I’ll give you ten if you can name even a single match. I got nothing.

None of that matters now though because it’s Royal Rumble time! It’s time again for the three-month stretch where things happen and things matter! Who will main-event WrestleMania?! Who will walk into the show of shows with the WWE and Universal Championships?! How will Vince McMahon screw up the best single-match of the year this year?! Let’s find out! 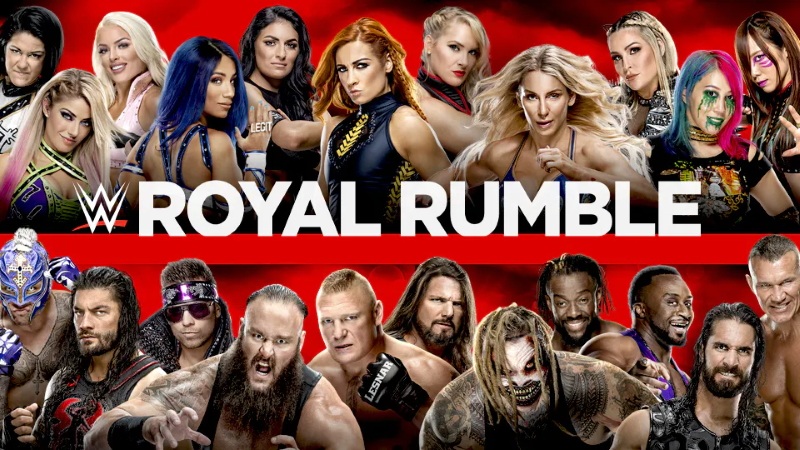 What even is this? It’s most wrestling fans’ favorite single match of the year. When done right, it’s hard to top a Royal Rumble. You get a great mix of current feuds, future feuds teased, nostalgia acts, debuts, returns, finishes that either shock or feel earned; it’s a great match.

The women’s event was the big talk last year but this year there’s not been nearly as much hype around it. That being said I can only envision two potential winners: Shayna Baszler and Ronda Rousey. The former is beyond ready to move to a new brand and a Rumble entrance and win would be the perfect way to get her over. The latter has everything in place for her to come back, win the event, and set up the big rematch against the only woman who beat her in her last run.

Wild cards are, as usual, Charlotte and Sasha Banks, but I think one of them will be the final woman out before the finish, and possibly will face the Smackdown champ at Mania.

Does anyone care? Yep/10. The intrigue of the match and the uncertain finish make this a must-see.

What even is this? It’s Sheamus’ big return match. It’s also the further irrelevance of a tremendous athlete in Chad Gable.

What even is this? Bayley’s doing good work as a heel champ but there’s not a lot for her to work with on SmackDown. Lacey Evans’ babyface character has come too soon after establishing herself as a heel. She needed time to gel and to work with more babyface stars before flipping sides. Bayley will get a good reaction but I fear the match will be a dud.

THE FIEND vs DANIEL BRYAN

What even is this? It’s the rematch from the Royal Rumble 2014 only both of these guys have had a crazy six years in between. It’s also, I believe, the chance for Vince to put the wheels in motion to do what he wanted to do six years ago but couldn’t because those pesky fans expected “their money’s worth,” the jerks.

Does anyone care? Ha/10 – How could you? Imagine I fed you a really nice steak dinner. And then I did it again the next night. And then again. And again. Every night for a month. Two months. Three. A year. You’d eventually grow sick of it, no? Now replace “steak” with “Roman Reigns and Baron Corbin.”

What even is this? It’s the rehabilitation of Asuka. I don’t expect the Empress of Tomorrow to walk out the winner, but I do think she will walk away with enough credibility in defeat to have a strong 2020 as a single’s star

Does anyone care? Oh yeah/10 – Becky’s the hottest star in the company still and the question of who she will face at Mania is one of the big questions going into the PPV. It’s always a big deal when the man comes around and I expect she and Asuka will put on a clinic.

What even is this? What even is this? It’s most wrestling fan’s favorite single match of the year…in theory. It can be done well and has been in the past, but more often than not WWE overthinks it and screws it up. When done wrong, a bad Royal Rumble is meandering, boring, predictable, and frustrating. We’ve had too many of those in recent years.

The men took a backseat last year but this year, with Brock Lesnar (the champ) entering at number one, there’s plenty of reason to be hyped. Lesnar in the Rumble offers a few different possibilities. The most boring and stupid finish would see him get tossed by the eventual winner, making the whole thing redundant and pointless. On the other hand, if he gets tossed by someone who doesn’t win, then that guy can work his way into the title match, making it a triple-threat match. There’s also the wildcard possibility of Brock winning and challenging for the WWE Championship, though I don’t think there’s any interest in seeing that.

Does anyone care? Obviously/10 – This is the match that basically sets the tone for the next three months of TV.

Who should win? Let’s break this into three categories…

The Surprise Legend: THE ROCK

The Not Surprise: ROMAN REIGNS

Keith Lee would be akin to Daniel Bryan winning in 2014 or 2015, neither of which happened but would have blown the roof off the place if it did. I would put the odds around 25% though; he’s just not a big enough name to sell a big title match on the biggest show of the year.

The Rock winning would be the biggest sports story of the non-SuperBowl week, though it’s probably 99% unlikely considering his busy movie schedule. Still, if Vince dropped like 100mm and Rock was willing to do it, you couldn’t get a bigger main-event. Rock is probably a no which means Vince would have to settle for the next best thing.

John Cena’s probably a no, too, which means Vince will probably have to settle for the next best thing.

CM Punk is probably a no, as well, which m—