REVIEW: Emma has a form to fit Jane Austen’s content, but some parts fall flat

Emma Woodhouse, as the beginning titlecard of Autumn de Wilde’s latest adaptation states, is handsome, clever, and rich. The titles didn’t happen to include the “only slightly spoiled’ bit that acts as a punchline to that passage in the book, but perhaps that’s because de Wilde’s Emma (Anya Taylor-Joy) is clearly more than slightly spoiled. Our first glimpse of Miss Woodhouse comes when she is picking out flowers for her governess’s wedding; her arboreal tranquility is undermined when she sharply tells a servant who cut the wrong blossom, “No! Not that one!” That sums up Jane Austen’s character pretty well–Emma has fanatical attention to detail, but expects others to carry it out for her. She’s selfish, precious, and manipulative, but all in the name of the aesthetic–something that, no matter how much we try to deny it, is at least a little relatable to many of us. 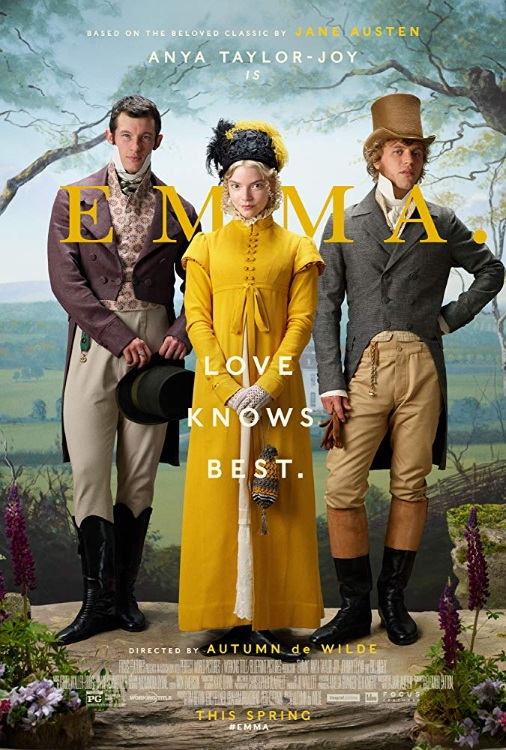 The aesthetic of Emma is enough to make anyone who’s into Wes Anderson salivate, though as the film goes on the confectionary scenery comes to feel like empty calories. The set is simply frothing with extravagant displays of wealth, and the characters are literally engulfed in frills, floofs, and high collars that make them into borderline caricatures of the period. This is a tale of a rich girl who has so little to occupy her that she resorts to sorting out everyone else’s problems, so the rococo decor and immaculate framing feels like the right choice for the source material. In fact, out of all Jane Austen’s books this one is the most superficial, since the intrigues set up by Emma don’t even have the redemption of being driven by her own desire for love–she basically just likes to stick her nose in everyone’s business. Out of all the dubiously likeable Jane Austen characters who try readers with their lack of conscience, this one might be the least redeemable. That said, my problem isn’t with the fitting aesthetic, but rather what goes with it. 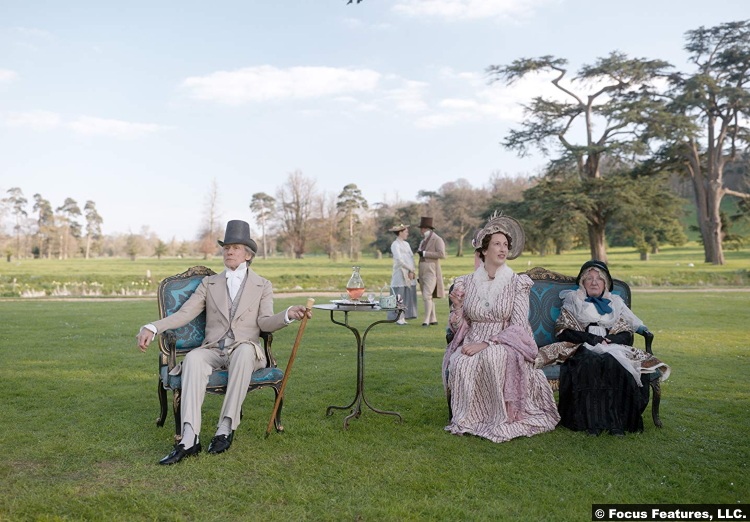 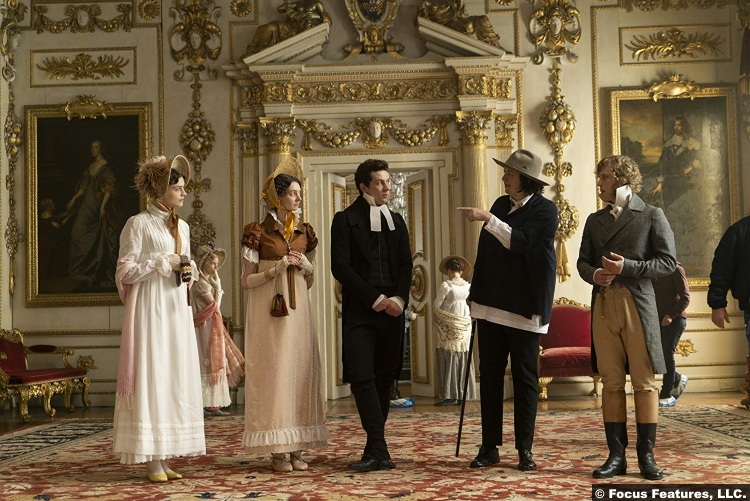 As far as the writing goes, I felt something was missing in this incarnation of Emma. So much of Austen novels are told through descriptions of the characters’ thoughts, since they are mostly based on misunderstandings between people–some moments are difficult to make read in the mostly silent scenes that set the tone in de Wilde’s version. Certain plot twists felt less natural than in other adaptations because they feel less set up by hints along the way, and often the dialogue added by the film isn’t up to snuff with Jane’s. One joke about how Mr. Elton pronounces the word “innocence” is clearly meant to have Curb Your Enthusiasm vibes, but the joke just doesn’t land despite Bill Nighy’s delivery, which would fit into the show perfectly. If the screenwriting had taken ownership of the material a bit more, the successful aspects of the film would have been set off to their fullest advantage. 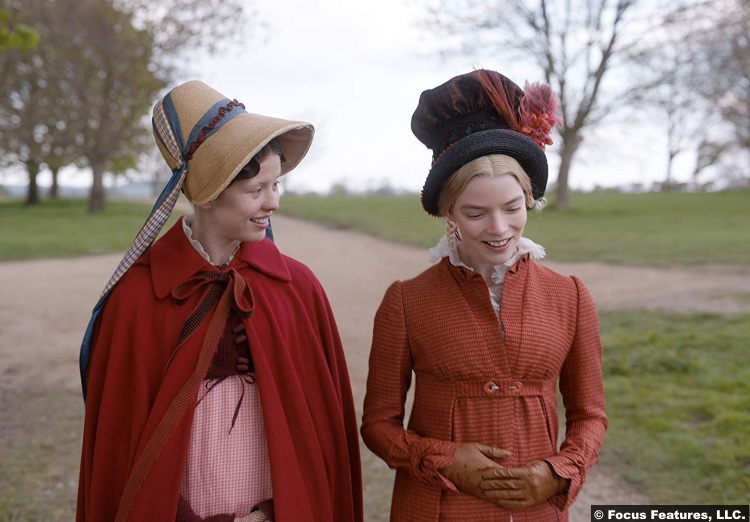 In between the writing and the set decoration are the half-aesthetic and half-content choices about casting and direction of actors; the performances in this film are as close to what Jane Austen would have intended as I’ve ever seen (Kiera Knightley’s Pride and Prejudice ties for first). A scene featuring a nude and–pardon my French–thick Mr. Knightley (Johnny Flynn) getting ready for the day was a completely unexpected gift. Anya Taylor-Joy’s entitlement oozes from moments as simple as the way she eats a strawberry, or the way she painstakingly performs every dance move perfectly in the centerpiece ball scene that is a legal obligation for every Austen film. And of course, Bill Nighy is in Love, Actually form as the ailing and hypochondriacal Mr. Woodhouse. He brings vigor and tetchiness to the character that gives him the energy of a Larry David in 1815, rather than his usual portrayal as a good-natured invalid–a change that adds rather than detracts.

However, my favorite touch was the portrayal of obsequious and social-climbing Mr. Elton–a positively alarming performance from Josh O’Connor. One scene where he presents a portrait to Emma is particularly unsettling–a fixed, oily grin and silent pantomiming gestures toward his servants are his only communication during this extremely drawn out interaction, and Emma looks just as rattled by it as we feel. This original touch was one of the choices that impressed me most, since I generally judge an adaptation’s direction by the way it embellishes and articulates the story without drowning out the author’s original voice. This portrayal of a character who is usually seen as foppish but charming brings fun into scenes that might just be a reading of the novel’s dialogue otherwise, and it adds a new dimension onto the character that is still congruent with what’s on the page. 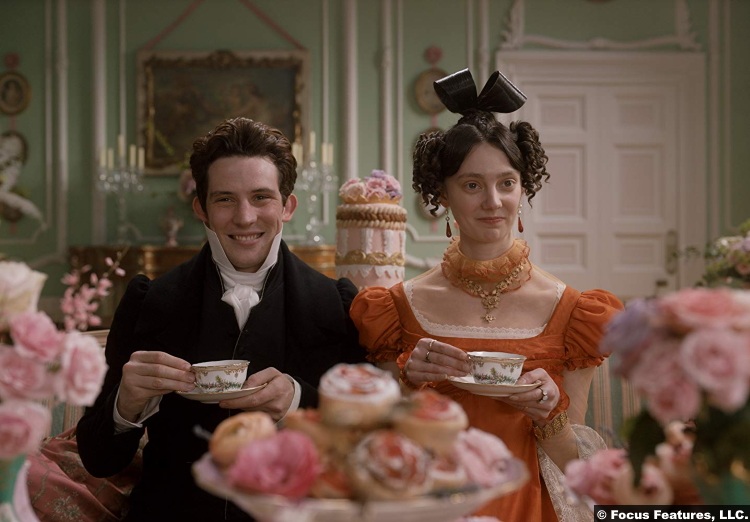 One element of Jane Austen’s work that I am always interested to see handled (or not) onscreen is the huge cast of characters that is never mentioned in the original novels. Not all of Jane Austen’s characters are slave-owners, but all of them do have a huge complement of servants who are constantly performing virtually every service a human requires for them. De Wilde does not make this a central focus of the film, but there is a recognition of the almost pitiable dependence of all these characters on servants, that makes us remember that the supposedly most powerful people in this town hold that distinction despite not putting on their pants themselves. (As we see, Mr. Knightley only has to pull his up the last quarter of the way or so.) In another scene, he throws himself to the floor of a disused ballroom in his giant mansion and just broods there for a while; a couple of servants who seem to have chores to do in that room are forced to make a quick exit. He and Emma even have a screaming fight while she is sitting in her open-top carriage, but it is only after he has left her in tears that she addresses her driver for the first time by shrieking “GO!” I myself had not even thought about the driver in the midst of the scene, much like Emma herself.

7/10 – de Wilde has brought a lot of talent together on this film and shown off a lot of her own, but despite the production value and casting it’s still not my favorite Emma.