REVIEW: Jedi: Fallen Order is a worthy addition to a great legacy of games

Star Wars has a long and storied history as a video game product. And unlike some licensed products, Star Wars games have been great, basically from the jump… 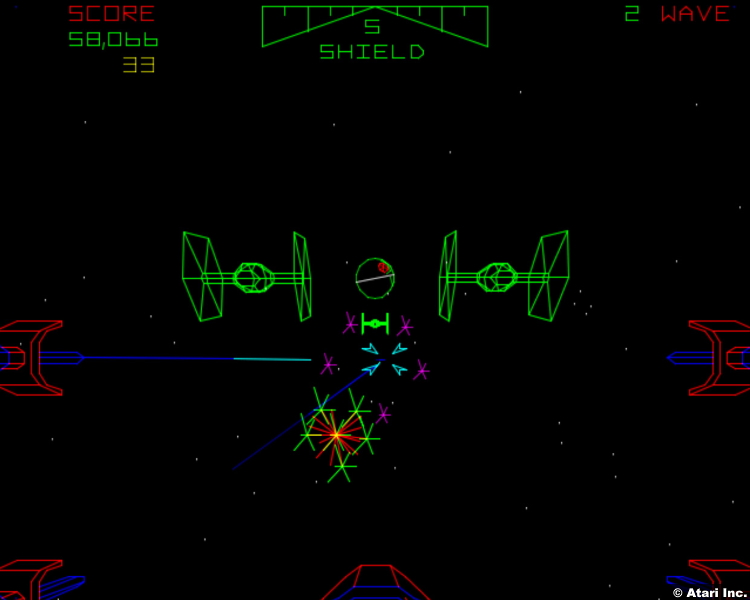 The game franchise peaked between 1997-2005, with games like X-Wing vs TIE Fighter, Rogue Squadron, Jedi Knight, Knights of the Old Republic, and the original Battlefront. Known for some combination of great story, great gameplay, solid single-player, or exciting multi-player action, Star Wars games were a hodgepodge of various styles and genres, held together by one of the most recognizable and profitable licensees imaginable.

After Disney acquired Lucasfilm, the LucasArts Game Studio was shuttered, and the rights to make Star Wars games fell to Electronic Arts.

Not only that, but EA purchased exclusive rights to Star Wars video games, something previously unheard of. In those seven years, there have been a whopping two games released for consoles/PC. Battlefront 1 was a relatively bare-bones online FPS. Battlefront 2 was basically the game Battlefront 1 should have been. And that’s…it. EA has had the license for almost a decade and the most they’ve done with it is a pair of FPS games that have little more to offer fans of the franchise than the 3D environments and sound effects they already love so well (and which are the easiest things in the world to reproduce since Lucasfilm has them readily available).

Finally, after all this time, a third game has dropped, this time a 3D adventure game, with a single-player focus and a strong story at the heart of the gameplay. Jedi: Fallen Order looks to be EA’s last chance to convince Star Wars fans that they aren’t just squandering the rights to an erstwhile gaming gold mine. In that case, the game can’t simply be “just okay.” It has to be, at least, “very good” and preferably “great” to really turn goodwill back toward EA. So…how is it? 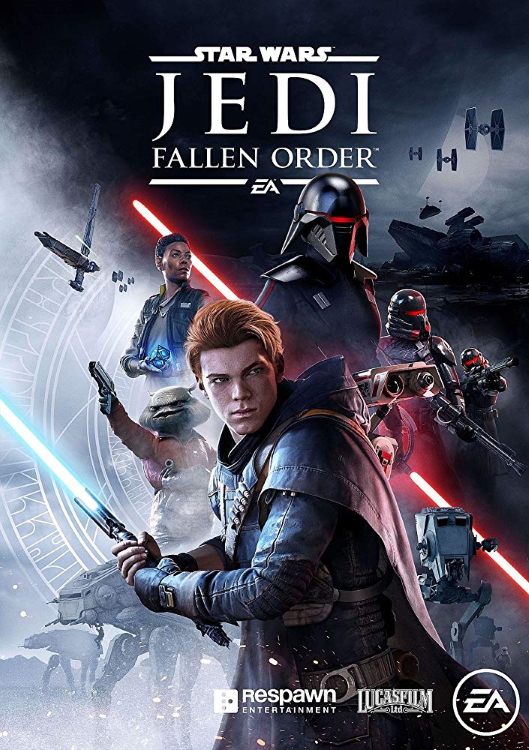 The game is not perfect and there some clear pros and cons to make note of, which, of course, I will now do… 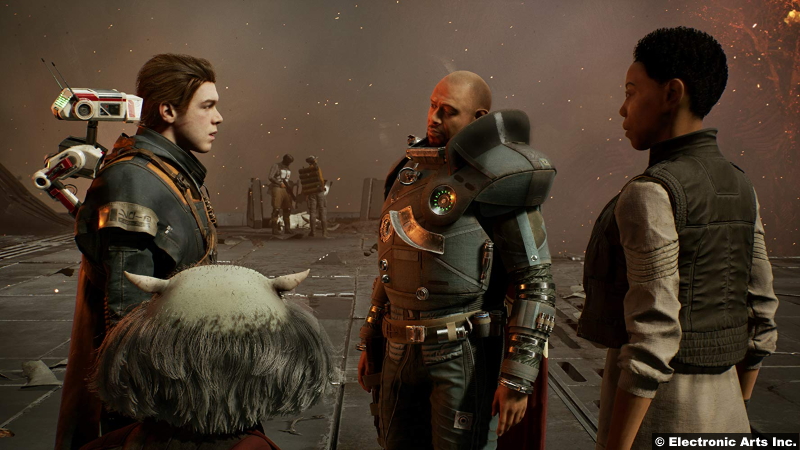 Sound design has always been a hallmark of Star Wars. Not just games but the shows and movies are able, after all these years, to continue feeling like Star Wars, even with new characters and settings, simply because the music and sound-design hearken back to the 1977 original. There’s simply nothing else that sounds like a lightsaber deflecting a blaster shot. Credit Ben Burtt for pioneering those “Star Wars sounds” and credit LucasArts for insisting that all their games captured the feel of Star Wars, no matter the game or hardware limitations. EA has carried that tradition forward. Say what you want about their now-trio of Star Wars games, you can’t deny they have the look and sound of the galaxy far far away. Fallen Order is no exception. Every sound and environment, both new and old, retains that distinctive Star Wars aesthetic. It’s what makes Star Wars, Star Wars, and it’s here in 4K resolution in spades. 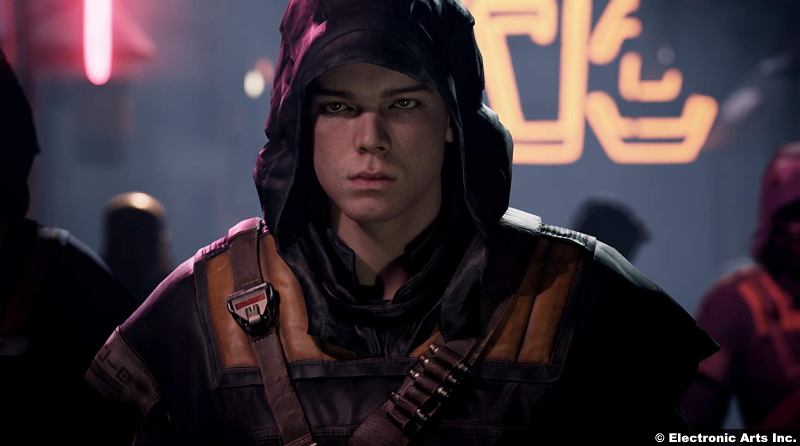 Star Wars adventure games have been hit or miss when it comes to their story. Some are half-baked (Dark Forces and Jedi Knight), some are convoluted (The Force Unleashed 1-2), and some are genuinely great (Shadows of the Empire and Knights of the Old Republic). EA completely punted on having a story with their first Battlefront game, but they did offer a half-hearted attempt at one in the follow-up. It was good but nothing memorable, and far too short to justify the purchase alone. Fallen Order seems like it was conceived as a story first and then had a game developed around it; that’s a feeling I’ve not had since Shadows of the Empire. There’s mystery, adventure, character development, and surprises to be found here, and while it’s not quite up to the level of Shadows of KOTOR, it’s good enough to fall just below those greats. 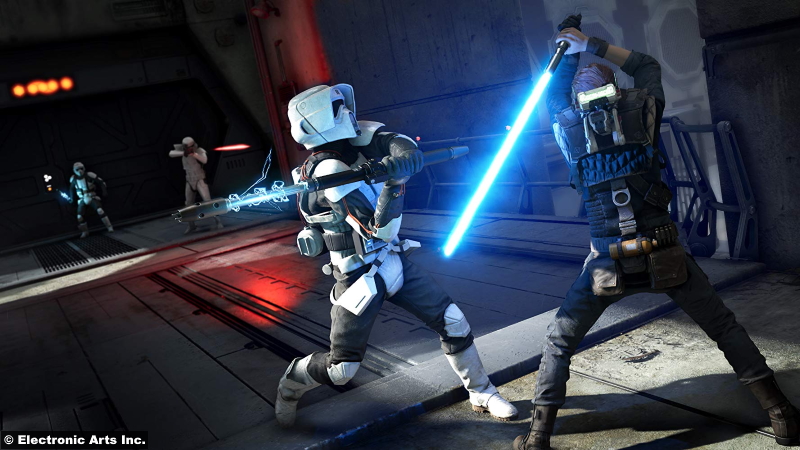 You will be swinging a lightsaber within the first half-hour of your playtime, but if you think you can get by just mashing the kill button like in the Arkham games, you’ll find yourself staring at the death screen far more than you might imagine. The combat is not incredibly deep, but for a game featuring a Jedi, it might as well be the grand canyon. There are plenty of skills to learn, as in past games, but here there’s also a need for patience in fighting, choosing how to engage, when to parry, when to block, slow, or thrust. There’s more finesse here than in any previous lightsaber-focused game. That being said, it’s just as satisfying as ever to deflect a blaster shot from one baddie, parry a swing from another, and engage in a furious combo to kill a third. 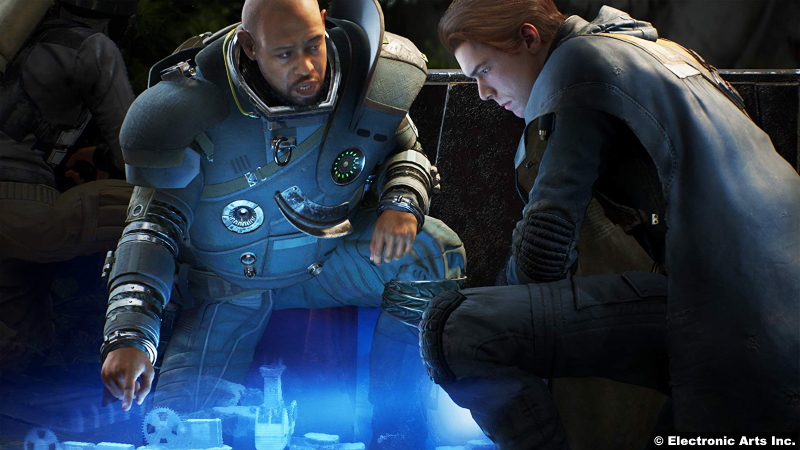 Anytime you play as a Jedi, it’s hard to strike the right gameplay balance between having challenging opponents and being an overpowered character. Developer Respawn Entertainment (EA’s division responsible for the excellent Titanfall games) should be credited with finding a happy medium. You play as a relative novice to the force, someone who has been unable to train and hone his abilities for a long time, meaning he is forced to re-learn his skills. At the same time, enemies are often presented in bunches; while it’s unlikely a single Stormtrooper could ever be a match for you, put six more in the area, having them all fire without remorse, and watch your health meter plummet in a hurry. There are times the game is absolutely brutal, but even then, there are plenty of save-points, infinite continues, and rarely ever are there any cheap-deaths. The game is hard but rarely unfair; it’s a welcome experience from many platforming/adventure games that tend to hold the player’s hand far too much. 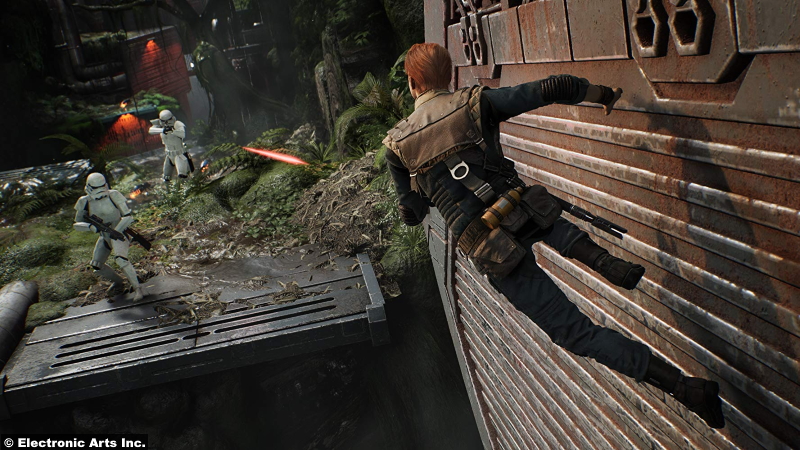 From a distance, the game might look like a Zelda clone but it hardly controls as tightly. Prepare to fall off a cliffside for no reason other than your character taking one more step than you wanted. Turning the camera with the right stick, often turns the character’s body, sometimes triggering an animation where he shuffles his feet, sometimes even to the point of stepping right off a cliff! Needless to say, this has happened to me more than twice. Turning around feels like you’re ice-skating. The camera also doesn’t always provide the best angle to line up a jump, making platforming sections cumbersome. Overall, the game works well-enough on wide-open spaces, but when things are cramped, and there’s stuff to fall off of, you probably will. A lot. I’m not expecting Nintendo-levels of precision, but when your character moves around a 3D space about as well as Crash Bandicoot for the PS1, you might want to fine-tune it a bit. 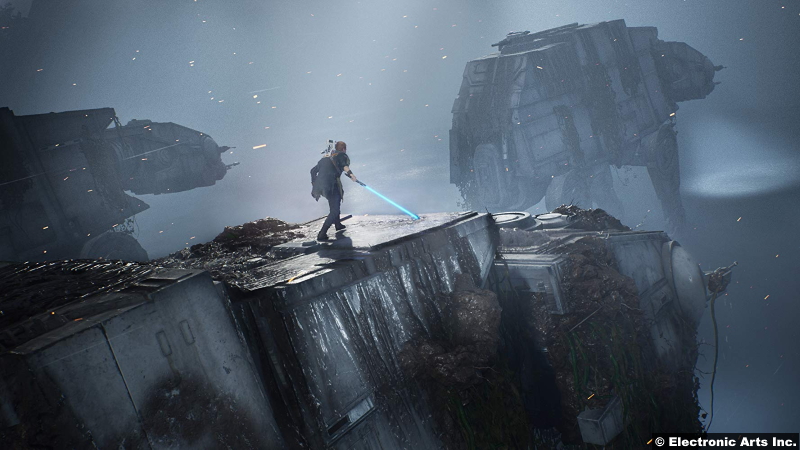 This is a mixed-bag for me, as I think the levels and overall objectives are good and occasionally very good. My biggest problem comes with a map system that’s too archaic to really help, and levels that are too visually similar to help guide the player to where he needs to go. A great level, even in an open-world game with multiple, optional objectives (which this is not; this is very linear), is designed almost to steer the player through it, letting the gamer think he’s discovering things, when really he was just going where things naturally took him. Fallen Order’s levels are beautiful and vast, but sometimes you get in the middle of them and can’t figure out if you should go left and down or right and up. Sometimes you can veer off the path and think you’re heading in the right direction, only to second-guess yourself because there was an opposite path to take that seemed just as correct. It’s never a good feeling to be standing in the middle of a level wondering “now what?” That feeling happened to me (a thirty-year gamer) at least three times. That may not seem like a lot but it resulted in a few extra hours of mindless wandering, all the same. 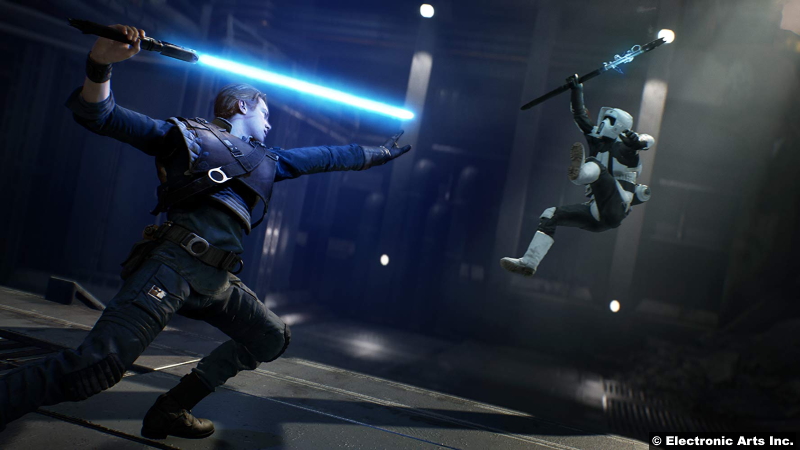 Once you finish the game, there’s not much incentive to play through it again. The developers have said the skill-tree is set up so that you can max out only one of the three major branches (health, defense, offense) in a play-through, meaning in order to see everything your character can do, you have to play the game three times. I get that, but that hardly seems enough to justify going through the same linear story, with its intentionally hand-holding, slow start all over again. There are always treasure chests you miss and skills you failed to unlock, but at the end of the day, once you see the ending, you’ve seen 90% what the game really has to offer. For some fans that’s fine, for others it’s a bit disappointing. For the record, I don’t think a game needs infinite content to justify the price; an adventure/story-driven game really only needs two things for me to go back to it again and again:

A game like Super Metroid, or Breath of the Wild, or Resident Evil 4 has those factors, and even though I’ve 100%’d them multiple times, I keep coming back to them. I don’t see myself coming back to Fallen Order. The story isn’t quite good enough to justify it playing through it again, the gameplay isn’t quite fun enough, and the content certainly isn’t varied enough. It is what it is for twenty hours and that’s about it.

Overall, the pros of the game outweigh the cons (what I loved about the game moved me more than what I didn’t), with the biggest sin for me being the $60 price tag for twenty-hours of content. That being said, twenty hours of Star Wars fun equals roughly $3 an hour, which is a better value than the $7.50 or so you would pay for a two-hour movie ticket. There’s also no micro-transactions to be found anywhere.

Considering the game’s publisher that’s almost worthy of a gold star right there.

In the end, Fallen Order is a game that will almost certainly satisfy Star Wars fans who miss the days when a new game from one genre or another was released just about every year. It’s as different from the Battlefront games as can be, and despite some flaws, it is a whole lot of fun to play.

9/10 – Hopefully this is the beginning of EA’s renewed commitment to Star Wars and to producing a variety of content based on the brand.