I never played either of the original games in the Battlefront series. I never grew up playing Halo or Call of Duty either. I’m a generation too late to have “grown up” with FPS games. Not to sound like an old man (I’m only 31!) saying “In my day…” but in my day the big genre everyone played was the JRPG. I grew up in the Super Nintendo Era, when Squaresoft was the Pixar of video game companies.

As such, I never developed a perfectly-calibrated twitchy right thumb needed to play console FPS games. I’m a late-bloomer but I’m giving it my all. I recently got an Xbox One, and thanks to the wonderful EA Access, I’ve played a TON of Titanfall. It’s helped me improve as an FPSer to the point where I wasn’t afraid to try out the Star Wars Battlefront Beta a few weeks ago. I tried it. I enjoyed it, but the experience was hallow. Being limited to one map and having an average survival time of three seconds turned me off to it, but I chalked it up to it being an incomplete game and my own inexperience. I was impressed enough with the audio and graphics and the plethora of gameplay modes that were promised that I went ahead and pre-ordered the game.

Now, having played the final release build of the game for several days, and after burning through a lot of the modes and offerings, I can honestly say that—to me, a casual fan—the worry about a lack of depth was unfounded. There is a LOT to do in this game. There are lots of options for single or local multiplayer, and enough map variety to keep every match interesting. It lacks a single player “campaign” (EA basically said they didn’t bother because no one plays them), but there’s still enough to do–even when you’re offline–that it’s not a huge loss. On the other hand, hardcore fans who are used to the depth that is found in Call of Duty and Halo 5 might find it a pretty game, but ultimately a limiting one.

And I’m still dying about five seconds after jumping into the match.

In my day we have a limited number of lives before “game over” stared us in the face. Thank goodness that’s in the past, because I have died—a lot—playing this game.

So what about the game in general… 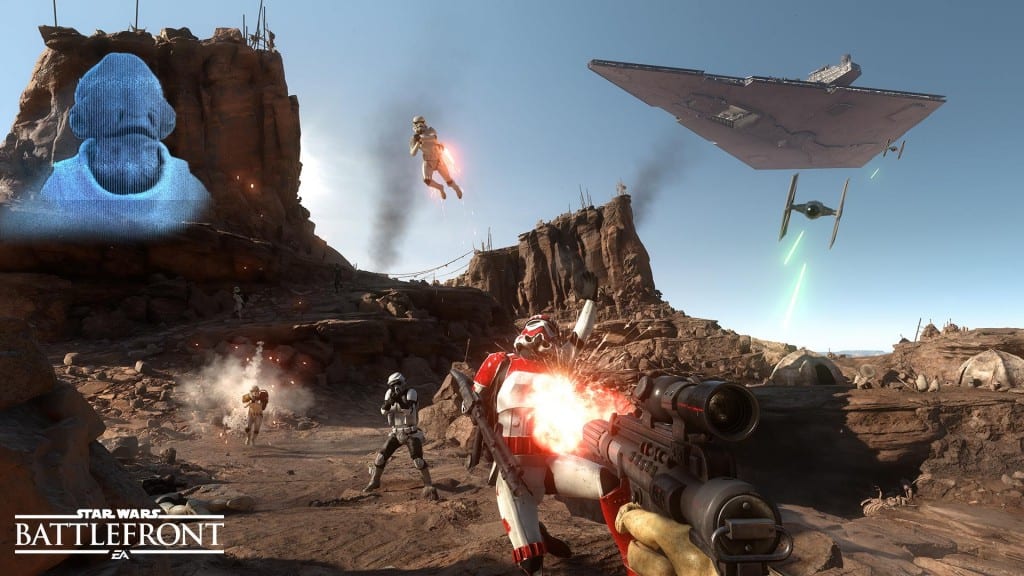 It’s hands down the best looking game I have ever played. It’s obviously a video game, what with the HUD and the fixed camera behind your character, but running around Endor at night, is real enough to fool some—for a moment—into thinking you’re watching a movie. I died more than a couple times because I stopped in front of some foliage and just stared at it, trying to determine whether it was a perfect sprite or a brilliant polygon model. The game is just incredibly beautiful. And not just that, but, other than the movies, it is the most faithful recreation of the Star Wars universe that has ever been put on screen. You won’t play in a video game-rendition of Tatooine; you will be on Tatooine. The full power of next generation graphics are on display here. It’s jaw-dropping.

Unexpectedly, the audio is a bit of a disappointment. Getting the audio wrong in a Star Wars game is almost impossible to do. The bare minimum of work required to please fans is to just slap on John Williams’ soundtrack over the action and boom, we’re pleased. And in this game, when the audio does play, it sounds perfect. But the problem is the audio doesn’t always play. There is a musical flourish that happens whenever a “hero” enters the battlefield, but other than that the music drops out almost entirely. Other than that the audio is as great as you’d expect. The sound effects are lifted right out of the Skywalker Sound library, the voice acting is great, the little chitter-chatter that NPC’s sometimes have sounds great too. Other than “not enough music” there’s not a fault to be had. But “not enough music” is a pretty big sin in a Star Wars game.

Mostly limited to tutorials disguised as “missions,” the offline gameplay is still an enjoyable enough diversion, whenever you get tired of battling online. It’s also great if you, like me, have kids at home who aren’t skilled enough to head out into an unforgiving online deathmatch. Me and my oldest son (who is nine) played a few split-screen adventures and had a blast. There’s a good variety of missions to do, and a fair number of challenges to complete before you’ve done all that can be done. The lack of a proper single player, offline campaign has already been mentioned, and while the reasoning is fair, it’s still an omission that would have been welcomed. Sometimes your internet goes out and you’re forced to only play games offline. Like a savage. In such cases it’d be nice to have a proper Star Wars next gen experience. If we can’t get it here, I hope EA creates another game soon that has one, even if it’s not a FPS.

Here is the bulk of the gameplay. There are ten varieties of missions spread across four worlds (with The Force Awakens’ Jakku coming next month). The most heavily populated is “Blast” which pits a team of Rebels against a team of Imperials. There’s no fancy objectives, just kill more than the other guys. Here is where Battlefront both shines and stumbles. There enough unlockables to keep things interesting, and your likely to level up every few matches, which means you’ll quickly be able to unlock the weapon or character-look that suits your interests. By the time you unlock everything it’s likely you’ll be skilled enough at the game to avoid some of the early frustrations that plague beginners, namely the “spawn, die, respawn, repeat” cycle that doesn’t allow you to spend more than     ten seconds in a map before getting shot by a sniper or just shot in the back. Wide open maps, like Hoth, are especially frustrating, but the name of the game is leveling up and improving your weapons so that you can be the frustrating sniper. If that appeals to your fancies then you’re likely to love the game. If you get bored by repetition and don’t care about unlocking the every last character model and weapon, then the game might not be more than a rental (…are games still available to “rent” anymore?). 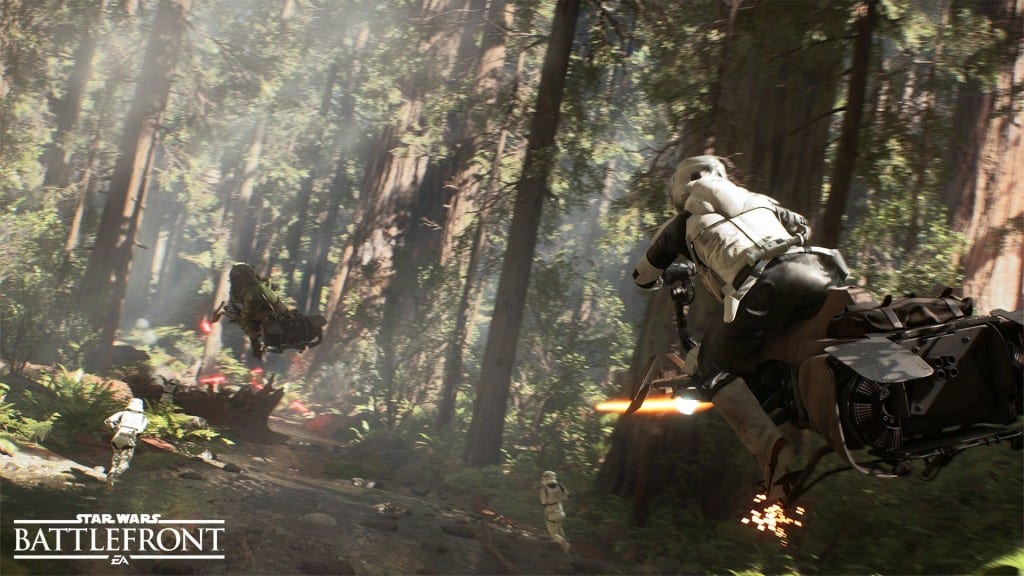 This is going to be a divisive game. It wasn’t made for the hardcore FPS crowd. It was made for the casual—the Star Wars—fan. It was made to capitalize on the upcoming movie that looks set to break all the records. In that regard EA has mostly succeeded, though I wonder if those same casuals won’t grow bored of the game and wish for a more traditional 3D action Star Wars game instead.

Back in my day there were a lot of ways to play Star Wars on a video game console. There were 3rd person action games, massive online RPGs, first person shooters, and the crown jewel: spacebattle/dogfight games, where you took control of an X-Wing or TIE Fighter and engaged enemies in flight-sim combat. There are moments where you take control of ships in this game, but the controls are loose and frustrating. Your crosshairs are controlled by the right stick while your flight is done with the left. You’ll spend most of your time flying right past ground targets, or out of sight from air targets because the controls aren’t up to the standard that old games like Rogue Squadron set. If EA decides to make a dogfighting game, it would be a disaster to reuse the control scheme found here.

Flying aside, the ground-based combat is action packed and even though other FPS games have better laid-out maps and more variety, there isn’t another game so gorgeous to look at. There isn’t another game that perfectly realizes the universe of Star Wars like this one and I’ve played probably every Star Wars game ever developed. It needs more audio integration, a more forgiving health bar to combat your fifteen second survival rate, and the flying mechanics need an overhaul, but overall this game does what it set out to do very well.

8/10 – Try it first if you can, as the shallow gameplay can be a turnoff to some hardcore players, but for a casual player like me, it had more than enough to keep me busy.