We have had a full month of NXT vs AEW action on USA and TNT. Looking back, I can honestly say I haven’t looked forward to watching wrestling to this extent since 2002. As far as I’m concerned Raw and SmackDown are dead to me. I’ll still keep up with it and keep the SO OF COURSE series going but there’s just nothing about the Red and Blue shows that have any value anymore.

Wednesday nights is where it’s at and with the Wednesday Night War now in full bloom let’s kick off a monthly series where we look back on the past several episodes of both AEW Dynamite and NXT on USA and see if either company came away an obvious winner for the month.

We’re going to be judging things according to three categories, how well the shows presented their material, how hot the atmosphere was, how well-done each card was each week, and whether there were any surprises that put a show over the top.

AEW has to be given credit for starting from scratch not even a year ago and already having production values on par with WWE. There are some design choices that are a step below Raw and SmackDown (SmackDown, in particular, has a stunning new set that is better than 75% of past WrestleMania stages), but there’s more to presentation than just the set. Audio quality continues to be a sticking point on Dynamite, with many wrestlers’ themes not coming in very distinctly compared to the WWE-produced show. It might be an intentional thing (like the ear-friendly pyro) or it might just be something they need to get worked out; either way, if you close your eyes NXT sounds like a better show.

Speaking of, commentary has to be factored in, too, and though the team of JR/Excalibur/Tony has been great for AEW, Mauro Ranallo is Mauro Ranallo. He’s as good as JR in the ’90s, if not occasionally better. There’s no higher praise to give someone than that. Throw in Beth Phoenix offering good variety, and Nigel McGuinness sounding like the second coming of Lord Alfred Hayes, and you’ve got a three-person group that can’t be beaten.

AEW has the advantage of a big arena backdrop while NXT still looks like a rinky-dink warehouse show, but WWE has squeezed every ounce of visual flair out of Full Sail Arena and once the Yellow Brand goes national it’ll be hard to top what HHH will have done with the brand, from a production standpoint. 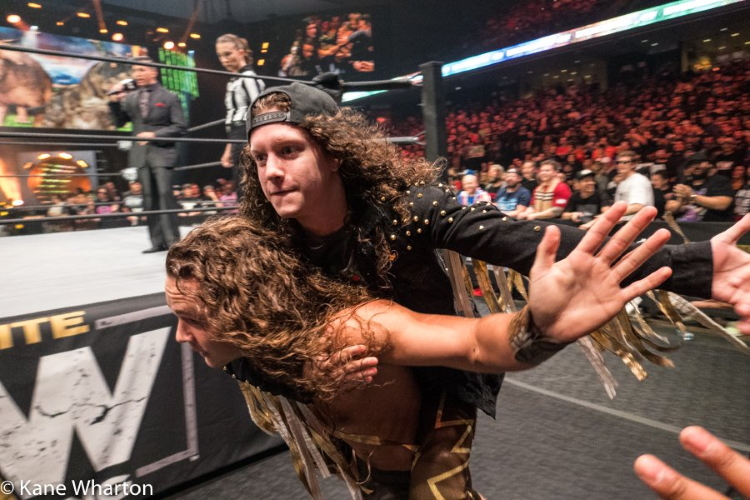 There is no starker contrast between the two shows than this. NXT plays to a crowd of literal hundreds. AEW plays to nearly-sold out basketball and hockey arenas. The visual comparison is no comparison at all. NXT looks like a minor league show. AEW looks like a genuine competitor to Raw/SmackDown, which it is.

Merely from the crowds, NXT isn’t even in the same league as AEW; it’s like comparing apples and oranges. When Full Sail gets rocking they can make a lot of noise at the expense of it sounding like fifty smarks chanting meta-humor nonsense. When AEW’s crowd is on fire, it sounds like a vintage Raw arena.

WINNER: advantage no one

This month has seen NXT and AEW approach the beginning of the Wednesday Night War in different ways. It’s not like the peak days of the Monday Night War, where both shows threw everything against the wall every quarter-hour every week until someone (WCW) finally snapped and someone else (WWF) rose to the top.

In this case, AEW is playing the high road, acting like NXT isn’t a legit competitor. They aren’t booking shows with any hint of pressure. If anything they’ve been too relaxed and too settled-in, but that’s probably designed to give the new show a “lived-in” feel. AEW has shown a strong commitment to time limits, win/loss rankings, and to under-exposing their talent. With only one show a week (not counting AEW Dark, Tuesdays on YouTube), there’s no way to showcase all their talent; instead, they’re spreading the love, putting mid-carders on one or two shows and no more. Again, it’s a measured, patient approach to TV that’s starkly different from WWE’s “hold nothing back” mentality.

NXT has come to USA with guns a-blazing. The show has had huge, Takeover-like matches, big roster-spanning brawls and shocking heel turns.  AEW may or may not see NXT in particular as a threat, but NXT is certainly booked like they are desperate to win the war. Whether their aggressive booking is sustainable is TBD, but in the meantime, it’s made for some exciting shows.

After Jake Hagger debuted on the first episode of Dynamite, NXT responded by moving Finn Balor down to NXT and then turning him heel for the first time in his WWE career. There’s been no bigger surprise than that and where the character goes from here has made sure NXT does not become the “other” Wednesday Night show. AEW has crowned a couple of new champions ship month, made a star out of Darby Allin, and had a fun Rick and Morty tie-in, but short of CM Punk strolling down the ramp there was no topping the return of Prince Devitt.

AEW had a strong debut month but their measured approach makes it hard to say “wow” about their overall October. There have been some “wow” moments, for sure, but overall NXT wins the month thanks to some incredible in-ring action, bolstered by the best commentary in the business, and a buzz-generating heel turn that will surely keep their momentum going into the next year.