Your SO OF COURSE preview of WWE SummerSlam 2019

Your SO OF COURSE Preview of WWE Extreme Rules 2019

Raise your hand if you’ve been watching Raw and Smackdown every week since the supposed change in leadership on both shows? Come on, hands up, let’s see them. Every week I mean, and not just skimming through, either. I mean you’ve sat for three hours on Monday and two hours on Tuesday. Every week. Anyone? Anyone?

When the change was made, it sent shockwaves across the pro wrestling news sites. I debated writing two thousand words on the subject but decided on two paragraphs instead.

You’d think the announcement that the guys who used to run WCW and ECW were being hired to run Raw and SmackDown might warrant an interruption to your regularly-scheduled programming. But no. I spent about ten minutes debating if I should write anything and decided against it. Why? Because I have no reason to believe anything will change.

Wake me when Eric or Paul pitch an idea to Vince that he (A) doesn’t like, and (B) agrees to anyway. When that day happens I’ll pay attention. Until then, my hopes are the opposite of up.

No need to wake me.

It’s August, which means it’s time for one of WWE’s Big …uh, ? No, three, Big Three PPV events. SummerSlam is here and with some genuine competition on the horizon it’ll be especially fascinating to see how Vince McMahon screws it up by overthinking his storylines, second-guessing his show-runners, and insisting upon his tired, antiquated notions of what fans want. 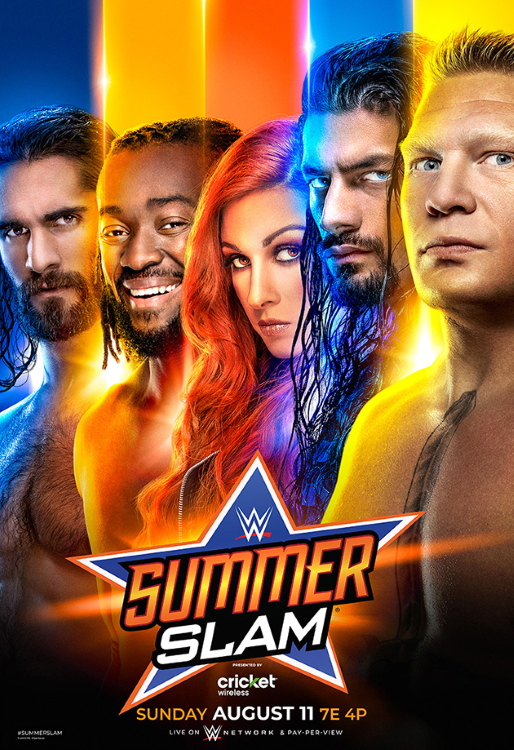 Level of excitement for the match? 1/10

What it is in 50 words or less? If Vince maybe forgets to notice this match is on the card, then maybe someone will give them the green-light to just pretend it’s an NXT Takeover, go 15 minutes, and do something magical. That’s a pipe dream, but I still have high hopes that these ladies will pull out all the stops. Of the three women’s matches on the show, this has the best chance to be the best match. I hope it is.

Level of excitement for the match? 7/10

What should happen? As much as I’ve loved Bayley’s recent run as champ, I think putting the belt on Ember Moon would be a big signal that the company is committed to making new stars. Goodness knows they need them, especially in the women’s division. Let Ember carry the belt for a few months and see if she can finally become the top tier wrestler she looked poised to become in NXT.

What it is in 50 words or less? The Demon vs The…Joker? What exactly is Bray Wyatt these days, I mean when he’s not a creepy Mr. Rogers knockoff? This is one of those rare feuds where it’s good that WWE just chooses to pretend like anything over eight months ago didn’t happen. These two had a fairly lengthy feud last year that bombed worse than King Mabel, culminating in a pumpkin king vs drag queen match that I would rather not revisit just kidding here it is: 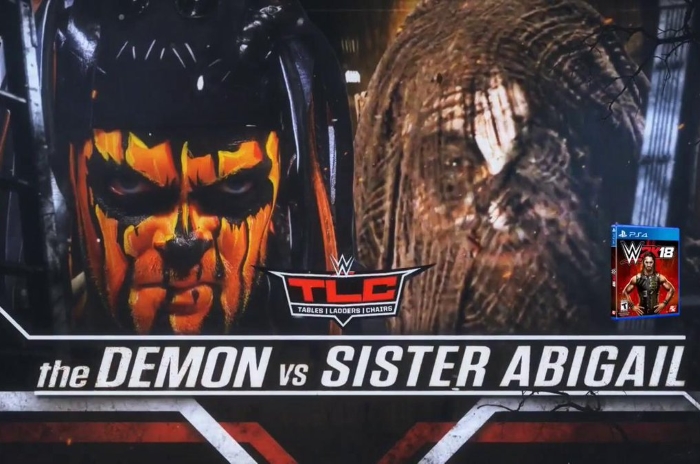 Level of excitement for the match? 6/10

What should happen? The biggest problem is the foregone conclusion at the heart of it. Everyone knows Finn Balor is taking time off and Bray Wyatt just returned, so while I expect a fun sports-entertainmenty match, I’ll watch it knowing exactly how it ought to end, with Balor eating a sister abigail and going away for a while.

What it is in 50 words or less? Wrestling

Level of excitement for the match? 8/10

What should happen? Wrestling!

What it is in 50 words or less? A desperate ploy for ticket sales.

Level of excitement for the match? 2/10

What should happen? Charlotte should murk her in five minutes, just straight-Goldberg her, setting up a feud with Bayley and/or Ember Moon for the SD women’s title.

What it is in 50 words or less? It’s Kofi Kingston’s “beat a vet clean to solidify your reign” moment. This is going to be really great. Two long-time performers, used to big stages, getting a chance to show out on one of the biggest nights of the year. They’re going to leave it all in the ring and I can’t wait to see it.

Level of excitement for the match? 9/10

What should happen? I can’t envision a scenario where Randy Orton walks away as the Champion, despite how many times he’s done that at SummerSlam. That just feels too wrong-headed. Kofi has had a much longer reign than probably most assumed coming out of Mania, and beating Randy feels like the perfect way to take it from “a nice reign” to “this guy is a top guy going forward.” In other words, Kofi needs the win more than Randy, but you knew that already. Everyone knew that.

What it is in 50 words or less? Disappointment.

Level of excitement for the match? 5/10

What should happen? Natalya should be the first thing we see on the show, lying on the ground in the back, knocked out by a mystery assailant. Becky comes down to accept a forfeit but instead demands to know who ruined her match. Cue Bad Reputation, Ronda and Becky have a scuffle, and there’s your fall program for the women’s title.

What it is in 50 words or less? It’s a match that’s not officially announced but I expect it to be. Likewise, it’s a match between two very great performers who work really well together, without any of the drama or baggage that their past matches had when Roman was being pushed as THE guy. This should be great.

Level of excitement for the match? 10/10

What should happen? Twenty minutes of brutal action, followed by Bryan cheating to steal a pin because this is only the beginning of the feud, and you don’t begin a feud with the babyface winning. Everyone knows th—

What it is in 50 words or less? It’s Goldberg getting a mulligan for almost killing the Undertaker and embarrassing everyone at the last Saudi show. The part of Hugh Morris will be played by the best ragdoll seller in the business. It’s a perfect pairing and the whole affair shouldn’t last more than a single minute.

Level of excitement for the match? 3/10

What should happen? ding ding ding, Ziggler leaps over a spear attempt, superkicks Goldberg who no-sells it, hits a spear, jackhammer, 1-2-3.

What it is in 50 words or less? It’s WrestleMania’s Universal Title match, with about 75% less enthusiasm. It’s amazing how the match that had me drooling to see Seth Rollins win, just a few months ago, now has sucked so much of my energy that I couldn’t even muster up the power to eye-roll if Brock just “Brock’s” him in eight minutes and wins the belt again.

Level of excitement for the match? 4/10

What should happen? What can you do to spice this up? If Seth wins like he did at WrestleMania then what was the point? If Brock wins what’s the point times fifty. SummerSlam has ended with some kind of a twist ending more than a few times in the past several years, the only big shocker I can think of would be Paul Heyman turning on Brock and siding with Seth. Don’t ask me what storyline motivation Paul would have for doing that; I have no idea. I just know it would solve three problems at once. First, it shakes Seth out of his funk while keeping him the top full-time guy on Raw. Second, it gives Brock something new to do for the first time in five years. Third, it gives Paul a new script to work with since one of the best talkers in the history of the business has been cutting the same promo ever since The Streak was broken. Everyone wins, and some “what will they do next” vibes might actually carry over to Raw.