Your SO OF COURSE Preview of WWE Extreme Rules 2019

Your SO OF COURSE preview of WWE Stomping Ground 2019

In the interim between installments, WWE announced the hiring of Paul Heyman(!) and Eric Bischoff(!!) as the new Executive Directors of Raw and SmackDown, respectively(!!!).

Remember way back in 2016 when Samoa Joe and Finn Balor had a months-long war over the NXT title and then suddenly on an untelevised house show Samoa Joe finally did it and won the belt? Remember that?

You’d think the announcement that the guys who used to run WCW and ECW were being hired to run Raw and SmackDown might warrant an interruption to your regularly-scheduled programming. But no. I spent about ten minutes debating if I should write anything and decided against it. Why? Because I have no reason to believe anything will change.

Wake me when Eric or Paul pitch an idea to Vince that he (A) doesn’t like, and (B) agrees to anyway. When that day happens I’ll pay attention. Until then, my hopes are the opposite of up.

That being said, I’ll play along for a month and pretend that Paul E. and The Bisch are actually in charge. In that case, THIS is your SO OF COURSE preview of WECW ALLIANCE EXTREME BASH AT THE BEACH 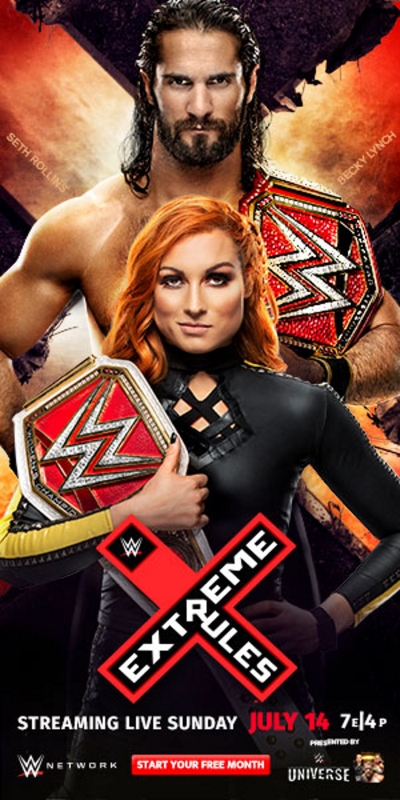 What should happen? A fun match with some cool spots, ultimately ending with the champions retaining. Heavy Machinery are fine enough TV acts but they’re not equipped to carry the championships beyond a novelty run. New Day isn’t hurting for another title reign either. Keep riding what you got till something better comes along (or until you find a better use of Daniel Bryan…who I suspect is being physically protected by being in a tag team).

What should happen? Both guys should wrestle for fifteen minutes at Mach speed, flipping and spinning and throwing and being thrown, culminating in the roof being torn off the place and everyone giving a standing ovation. Who wins? We all do.

What should happen? Both guys should also wrestle for fifteen minutes at Mach speed, flipping and spinning and throwing and being thrown, also culminating in the roof being torn off the place and everyone giving a standing ovation. Who wins? We all do.

What should happen? Sasha Banks makes the save, evens the odds, helps her bestie win, and then that’s it. She doesn’t turn heel and challenge for the title because that’s too predictable. She instead becomes a wild card. Not the stupid WWE kind, but a real wildcard, popping up unannounced on Raw to attack Becky Lynch. She wants the top prize.

What should happen? Undertaker and Shane should just play dominos backstage and let Roman and Drew have a heavyweight slugfest for ten minutes, ending with someone’s bloody forehead getting pinned.

What should happen? I want Joe to win, if only because I want him to be the first person ever to hold the ROH, TNA, and WWE Championships (the North American world triple crown). But I don’t want him to win right now. For one thing, I don’t want Kofi to drop the belt he’s done such a good job carrying on a B-show in July. Wait a month and do it at SummerSlam. For another thing, Joe deserves a big stage for his big world title win, and a dirty finish that prevents him from winning the title would give him all the fuel he needs to go after it even harder in August.

What should happen? The feud should end. Please. Let it end. I haven’t been worn down enough to want to see either Baron or Lacey hold a championship, but I’m at the edge of insanity all the same. Please end. For the love of all that is good. End.