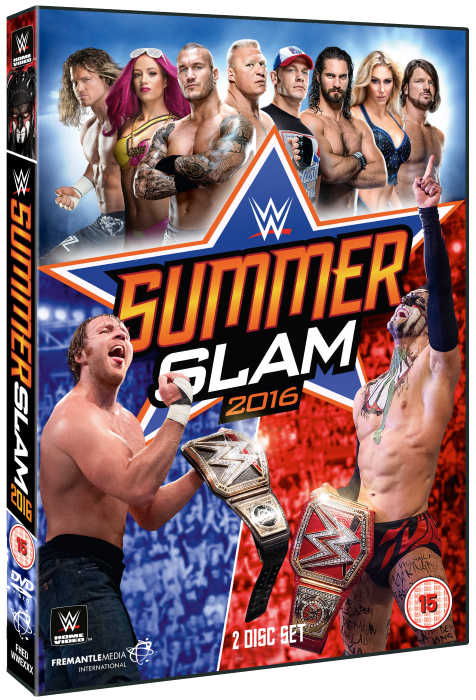 WWE tried to have all the hype going into SummerSlam focused on Brock Lesnar v Randy Orton, marketing it as “15 Years In the Making” throughout the lead-in to the PPV. The big issue with that is, while Orton is a main-event level guy Brock hadn’t faced since his return, no-one was actually clamouring for it in the first place.

Of course, due to his stature and unique drawing appeal, having Lesnar be the focal point is understandable.

The show, for the second year running, was overshadowed by an NXT Takeover event that was held the night previously and that, along with the ridiculous running time of the event (over 6hrs if you also watched the whole Kick-Off Show too), really hurt SummerSlam’s general reception.

If we ignore that and just take each of the matches / segments separately (which, with it being on DVD), is an option as you don’t have to watch it all at once), then it’s a decent enough event with a few matches that really pack a punch.

Opening with Enzo & Cass in Brooklyn was a great idea as they were over like rocketbusters (Credit – Tazz, 2002) and had the crowd in the palm of their hand. Having them face off against Kevin Owens and his “best friend” in Chris Jericho was also a great idea, even if the wrong team won in the end. Owens is one of the best ever at improvising or playing off his opponents’ schtick (case in point, the Enzo dance on the apron), while Jericho is in the midst of a fantastic character run that combines elements of suit-wearing Jericho, Y2J-era Jericho, Bon Jovi But Not Jericho and Conspiracy Theory Jericho to create an amazing character that is close to being on a par with his creative peaks from years past.

Unfortunately, Sasha v Charlotte, while having its moments, was a bit of a mess overall and a massive disappointment based on what they can do (and have done) in the past. It really is a shame as they perhaps should have kept Sasha’s title win for SummerSlam instead of it being on RAW (which they have just done again, for some reason).

Apollo Crews is the new Neville; an amazing combination of speed, agility and strength who shone in NXT (although the ex-Adrian obviously shone brighter there), who comes to the main roster, is hyped to the gills, but ultimately has no character, no character progression, no real personality and is all about hitting that one move. He is salvagable (as is Neville), especially with the Cruiserweight Division making a return (he is currently billed as 240lbs, but a little slimming down and some kayfabing of the numbers will work). As it stands at the moment, he is lost at sea and against The Miz, who is working at peak efficiency, his negatives were glaringly obvious.

Miz is on fire, between the ropes and on the mic, so I was hoping that they allow him to run with the IC title until he is at least close to breaking Honky’s record. Either that or put him back into the WWE Championship picture.

The former reality TV star is currently THAT! DAMN! GOOD!

Following on from that, what many consider to be the real main event of SummerSlam between John Cena and AJ Styles was (and this pun is never going to get old) phenomenal in almost every way. Both guys went at it for over 20mins in a clean fight that went a long way to legitimising Styles on the WWE roster while also allowing Cena to portray a character where age, the schedule, all of the wars from the past, etc, are catching up to him. He is still Big Match John, but SuperCena’s cape isn’t as shiny as it once was and a new breed are closing the gap with every day that passes.

It’s a fascinating story and one that I hope is told to an equally fascinating conclusion down the road.

As many a previous PPV card can attest, when the best match of the night (which is also the most anticipated match of the night) takes place in the middle of the card, it can be ridiculously tough for all of the performers who have to follow it. Not only from a “can you top that” aspect, but from the side of an emotionally drained crowd as well. Having been sat around for close to 4hrs at this point, they would have been restless and tired, so having just witnessed the true ascension of a new WWE headliner in a sterling bout, they were probably just anxious to get the show over with.

That wasn’t helped by the sluggishness of the Tag Team Championship Match. Now, I love New Day and think that they rarely have an off night, but the whole testicles-centric nature of the feud with Gallows & Anderson just didn’t work at all. Having John Stewart out there was an unneccesary distraction too. Add in that the former host seemed completely off in his own right and a botched finish (did Big E. really have to be in his wrestling attire when he wasn’t cleared to wrestle, etc?) really harmed this one.

Another match that should have been more than it was is Ambrose v Ziggler. While the action was fine and the promo work leading into it was great from both men, the match was pretty standard and did nothing for either guy. This is one of those title defences that everyone will pretend never even happened a few years down the line.

Two Women’s Division matches on one show was progress and that the normally throwaway six-person tag actually meant something (i.e. the return of Nikki Bella), it was not without problems. Firstly, Nikki comes back and joins the heel side of the divide and genuinely plays the heel. That by itself is fine, but on the following Smackdown, they turn her face, switch Carmella and then run with the story they probably always had planned.

Instead of what happened at SummerSlam, they should have had Carmella switch sides before the match started. Remember, the heels were down a member after Eva Maria couldn’t compete, so having The Princess of Staten Island do a Cody Rhodes and jump ship to the other side before the bout began allows her heel turn to be in a bigger stage, be a bigger shock and put the faces at a disadvantage (which is how it should always be). This, in turn, leads to face GM Daniel Bryan to come out and say that it is not going to be a three-on-two, then introduce Nikki Bella to be a part of the face team.

They do the match as planned, except Nikki is on the other team and then, when we get to Smackdown, there is a perfect reason for Carmella to jump Bella like she did instead of it being so damn random.

Anyway, enough with the “How WWE Should Have Booked…” (Credit – WhatCulture.com, 2016) and on with the review… and the stupid amount of heat generated by the design of the Universal Championship Belt.

Seriously, the fans in the arena actually booed every time the belt was on the screen and in reality, that’s a petty thing to do when there are two awesome workers going above and beyond to give the title a running start. At one point, as has been widely reported, Finn actually dislocated his shoulder and put it back in by himself to finish the match, which is damn impressive all round. In addition, Seth Rollins (who, like Nikki, should have returned as a face, especially after the WWE/24 special aired) had his working boots on.

While it didn’t reach the heights of AJ v Cena, it was easily the second-best bout of the night.

What was not the second-best bout of the night was Brock v Randy (well, all of the others except Finn v Seth weren’t either, but you know what I mean).

For a bout that was hyped to high-Heaven (see opening paragraph), it feel flat as it degenerated into the standard Suplex City matches Brock has become synonymous with. Now, I like watching a giant shaved bear throw mere mortals around like they weigh nothing, but when said mere mortal is Randy Orton and he is essentially sandbagging Lesnar on each of the Germans, it becomes a collosal waste of time for all concerned.

The finish, while sem-unique and very visceral, did nothing for either man and only really emphasised that worked nature of strikes in general. The same spot worked magnificently in Brock’s favour during his first match back against Cena, but that was because the spot was the beginning of the match, not the end. It allowed Lesnar to be the beast that he is, while showing Cena fighting through near annihilation at the hands of a guy he was severely undermatched against.

Here, it just fell flat and did nothing but make Orton look like a chump.

And that was the end of your 4hr show.

Three matches from the Kick-Off Show are your extras (and, in reality should be extras on all PPV releases) and they are pretty good overall.

For this to be the final WWE match for The Dudleys was a bit of a waste, which could sum up their entire 12mth run with the promotion. It’s a shame as they boyz from Dudleyville could have been used to really put over the crop of new tag teams on the scene (American Alpha, Enzo & Cass and, had they dropped in on NXT, The Revival), but as they rarely won any of their matches, it would have meant nothing.

As I said in the review, SummerSlam is a decent enough event with a few matches that really pack a punch, but for SummerSlam, that isn’t anywhere near good enough. It’s meant to effectively be one rung below ‘Mania, but some of the matches were RAW level at best.

Sure, Cena v AJ, Rollins v Balor and the opening tag were SS worthy for their own reasons, the rest was not, which means this isn’t a purchase worth getting unless you are a completist.

Ever since The Network became a thing, the big dilemma for these vanilla releases is that if you are a subscriber, there is literally no reason why you would buy this.

WWE need to realise this and have their PPV releases come with exclusive extras, be it a behind-the-scenes look at the day or non-televised matches featuring those on the card (from one of the many overseas tours, for example). Otherwise, there is no incentive.

Points: 5/10 (for non-Network subscribers only)