WWE SummerSlam 2012: An Outsiders View Inside The Staples Center – Part One 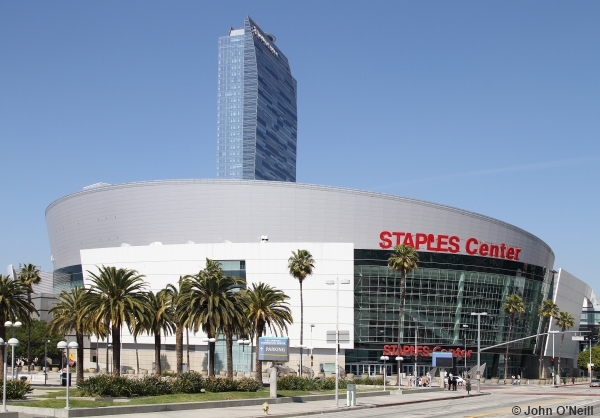 That’s quite the cold into, I know, but I think it establishes something that it’s important to take into consideration. I’ve seen one full wrestling show this year; WrestleMania. If you were to plot a Ven diagram of “wrestling fan” and “ignorant about wrestling”, I’d occupy the very thinnest slither of cross-over. So, with this in mind, forgive me my appreciation of Santino’s music, it’s the first time I’ve heard it all year.

It’s SummerSlam 2012, and, as THQ’s esteemed guest, I’m here, trying my hardest to pretend that Jim Ross being three feet away from me isn’t a big deal. I distract myself in the traditional Californian way; by asking a Mexican chef inane questions about shrimp. I’m torn between the fan-boy urge to bow before J.R. and possibly attempt to steal his hat, and the “too cool for the room” urge to pretend I’m around celebrities all day. It’s this dilemma that’s driven me into my seemingly unescapable, yet utterly meaningless, crustacean themed conversation. 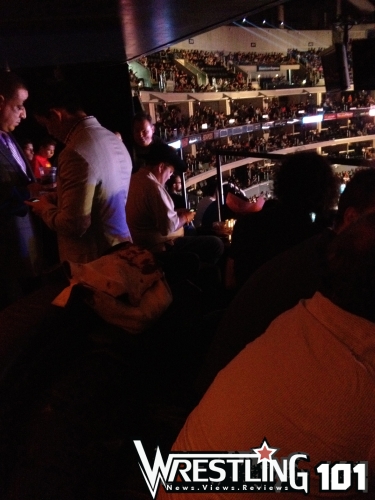 It’s just genuinely wonderful. I think an intro is a vital part of any wrestling theme tune. It’s not only an intro to the song, it’s an intro to the wrestler, and I believe it should say something about that wrestler, about that gimmick. It’s one of the plethora of reasons why I’ve only watched one, about to become two, wrestling shows this year that all gimmickry appears to be, if not dead, then in a coma from which is may or may not recover, and, in such an age, it’s rare for the intro of any theme music to say more than “We may or may not be Alter Bridge”. Gone is Mankind’s crashing car, Kane’s satanic organs or Austin’s broken glass. So a few bars of Italian opera to herald the intro of, *gasp*, an Italian character sends my heart into a flutter.

“Olvidar los camarones, this is a wrestling show”

Not only are my cynical, late-90’s revisionist humbuggings called into question by a genuinely effective gimmicked piece of music, but the live crowd erupts into a welcome fit for any Attitude Era mid-carder you could think of. Maybe I’ve been wrong, maybe I’ve been jaded, maybe Santino is actually one of wrestling’s bright sparks.

It’s an argument I’ve heard before from all angles. Besides the fawning not-old-enough-to-know-betters, people with otherwise agreeable opinions have been constantly informing me that I’m missing something about Santino, and it’s an opinion now being reinforced by 17,000 Angelenos.

So I take my seat and prepare to be humbled. I’m already aware of the greatness of Claudio Castignoli or, as I’m apparently now supposed to call him, Antonio Cesaro, so that much, at least, I’m ready for.

The match is a solid one. Not on the pay-per-view itself, this is the closest thing we get to a dark match, available only on YouTube. The fact that the WWE’s move to YouTube has been so lacklustre means that everyone is well aware of the result of this match long before it starts, but the popularity of Santino, and the skill of Cesaro more than make up for it, and in mid-card dark match terms, it’s a beautiful little three or four minute match. The crowd is engaged, hell, I’m engaged.

Then Santino gets something out of his costume. Mr. Socko? No, it’s “the cobra”. Fine, he’s a comedy character that I don’t find funny, but, fine, he’s got a sock-snake… thing… fine. Back to a great little match. It’s impressive to thing of this in terms of a dark match, because the crowd is unbelievably into it, which I would assume is all the work of Santino, in which case, well done WWE; using a popular baby face to put over a talented heel. Text book character evolution. Consider my mouth shut, consider my cynicism gone. And all it needs is an ending.

…What? Just… what? I hope to God that I’ve missed something here, because, what I just saw was a lovely little match ending when a wrestler was distracted by his own arm. His own arm, dressed as a snake. Maybe I’ve been out to long. That’s the first thought that comes into my head, and shrimp becomes a tempting topic of conversation once again as the resounding reaction of the crowd turns from genuine involvement into, “…oh”.

It’s important for me to dedicate so much time to that one dark match, because, in terms of the live experience, it was a key moment. It proved to me that modern WWE crowds could care, could be loud, could be engaged, but it also showed that they could be let down, that it was possible for a solid three-star match to lose the crowd on the basis of a poor, kayfabe stretching ending.

And so began Summerslam.

The night before, we of the wrestling media had been privileged enough to hear a moving, passionate and strangely private speech from Dolph Ziggler concerning his attitude to his upcoming match with Chris Jericho. He assured us that he saw this match as potentially the starting point of a new phase of his career, where he could define himself as a main eventer of the future. Unbeknownst to the audience at large, the press box was filled with apathetic nerves for Dolph. As the crowd booed, the press fell silence in nervous respect. Either we’d fallen for the crudest of pre-match hype techniques, or we were set to see something very special indeed.

Chris Jericho is hugely popular. Santino wasn’t an exception; so far, every baby-face has been greeted with genuine appreciation. Unfortunately, the crowd’s reaction to a previously shown image of John Cena on the big screen means that I already know that this streak of authentically popular baby-faces is set to come crashing down, but, until that point, I’m enjoying the lack of smarkish, contradictory heel-cheering. They are very much a crowd caught up in the product and, on some level, believing in it, be that belief literal, or emotional. For an old, jaded wrestling fan, it’s a moving site, and something that’s satisfyingly easy to get swept up in. Inside me, there’s the hint of a cheer, the strain of a boo, and the longing to get more involved than simply clapping politely for each move, like a suited businessman in the Tokyo Dome. 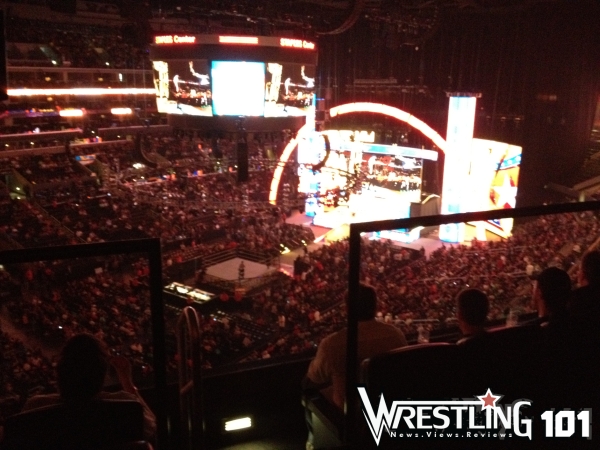 Heartless party-pooper that I am, I’ve been down on Chris Jericho as a worker since his return, influenced heavily by his underwhelming performance at WrestleMania, but, here, he’s more than making up for it. Barely a minute into the match, I, and the crowd, are enthralled. Every Jericho move is cheered, every Ziggler move is booed, every high spot is “Ooooh”-ed, every knife edge chop is “Wooo”-ed, and every silence is torn 20/80 by a “Let’s go Ziggler / Y2J” chant. I glance around the room; the press are all smiling to themselves ever so slightly. Ziggler looks set to keep his promise.

The match is relentless, and although the volume of the crowd slowly fades, it’s more to do with vocal chord preservation than it is lack of enthusiasm. Everyone’s still fully engaged, no one’s looking around, no one’s leaving their seat.

With perfect ring-awareness, Ziggler and Jericho start to raise the tempo, and, instantly, the voices and hands of the crowd are back in this one. It’s a special thing to see; an opening match, lacking a title, lacking too much of a build yet gripping a crowd, enthralling an audience.

Dolph Ziggler’s selling is beautiful. Absolutely beautiful. It’s beautiful to a fault, as it makes it all too tempting to make him into a jobber. Just a simple enziguri is enough to convince a knowing crowd that we may have just seen the end of the match, and Jericho’s picture-perfect Frankensteiner draws as much noise from the Staples Center crowd than any L.A. Kings goal or L.A. Lakers slam-dunk ever has.

The crowd are back in this maybe more than ever before. Any mid-match fatigue is long gone by the time Jericho’s Lionsault is countered. This is indeed something special, and everyone who heard Ziggler’s emotional, almost tearful words last night is happy for him, and when Dolph, that’s right, Dolph, not Jericho, ends with the match with the PERFECT WCW-era Walls of Jericho (a move that’s always been more impressive to sell than to perform), the crowd rises in applause. Many of the crowd are cheering Jericho, the solid and victorious fan-favourite, but, in the press box at least, we’re applauding a man who we can’t help but feel just kept a very private promise to us. We’re all applauding Dolph Ziggler.