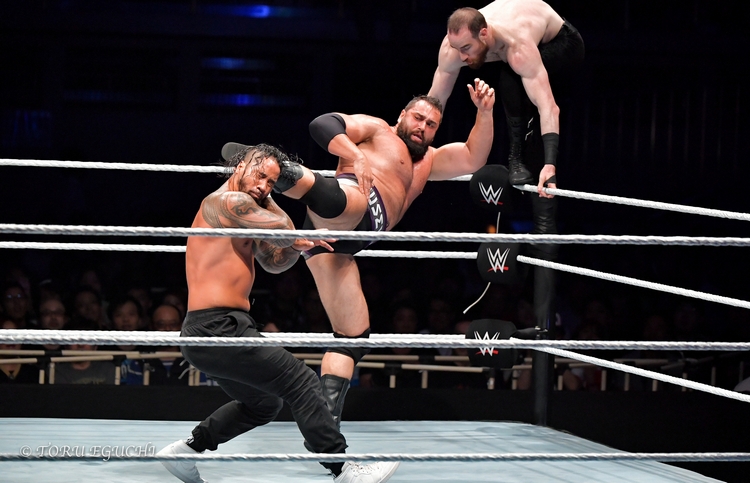 As they prepare for their Mixed Tag Match against The Miz & Maryse at WWE Hell in a Cell, SmackDown LIVE kicks off with Daniel Bryan & Brie Bella, who would be interviewed in the ring by Renee Young. After being shown a video of The Miz & Maryse calling Daniel & Brie out before SmackDown LIVE when the arena was still empty, Daniel calls The Miz & Maryse a “couple of cowards”. Brie then says that it’s clear that they don’t have to wait until WWE Hell in a Cell before Brie calls out The Miz & Maryse for a fight right now. However, Renee Young informs Daniel & Brie that The Miz & Maryse are no longer in the building. This brings out Andrade “Cien” Almas & Zelina Vega as Zelina calls Total Bellas “Total Bores” before Almas addresses the couple in Spanish. Zelina then explains that Andrade wants to finish what he started last week and he wants to do it right now.

In the opening match of the night, Daniel Bryan, with Brie Bella in his corner, would go one-on-one with Andrade “Cien” Almas, with Zelina Vega in his corner, in a rematch from last week. In the end, it was Daniel Bryan connecting with the running knee to the face of Andrade “Cien” Almas as Daniel pins Andrade for the win. After the match, Zelina Vega would get in the ring to check on Andrade “Cien” Almas and this is when Brie Bella would strike, taking Zelina out with a running knee of her own. The Miz & Maryse would then appear on the Tron to tell Daniel & Brie that they are taking the night off so Daniel & Brie will have to wait until WWE Hell in a Cell to be “embarrassed” by them.

In a special interview with both SmackDown Women’s Champion Charlotte Flair and Becky Lynch where the former best friends would be kept in separate rooms, Charlotte says that Becky would have done the same thing she did at SummerSlam. The champion then says that she knows what it’s like to grow up in someone’s “shadow” before saying that Becky put herself in Charlotte’s shadow. Charlotte continues, saying that Becky could have asked her for a title match instead of throwing away their five-year friendship. Becky responds by telling Charlotte “screw you”, asking if she looks like a “charity case” before saying that, from now on, she’s “taking”. Becky continues, saying that all she cares about is taking her rightful spot at the top of the SmackDown LIVE women’s division so she doesn’t care what she has to do or how many times she has to drop Charlotte, she will get the SmackDown Women’s Title back. Charlotte then says that Becky has always been “second best” in the ring with Becky telling Charlotte that she better shine the title up real nice because, after WWE Hell in a Cell, she’s never going to see it again. Charlotte then gets the last word in by asking what Becky’s “excuse” will be after WWE Hell in a Cell.

In a rematch from two weeks ago, Naomi would be looking to avenge her recent losses to The IIconics as Naomi would go one-on-one with Peyton Royce, with Billie Kay in her corner. In the end, it was Naomi using a sunset flip to score the three-count over Peyton Royce. After the match, Billie Kay would ambush Naomi as The IIconics would beat Naomi down in a two-on-one attack. This is when Asuka would return to SmackDown LIVE as “The Empress of Tomorrow” would rush the ring, tossing Billie Kay out of the ring before taking Peyton Royce out with a knee to the face. As The IIconics regroup on the ramp, Asuka would check on Naomi at ringside.

Backstage, The Miz & Maryse arrive in the arena but they are informed by SmackDown LIVE General Manager Paige that Daniel Bryan & Brie Bella have left the building in search of The Miz & Maryse. Paige then says that The Miz will compete tonight and, if they leave the arena, they better not come back.

Despite his vow to show up at AJ Styles’ home, Samoa Joe would be on SmackDown LIVE. Joe says that AJ is probably waiting with a baseball bat at the Styles’ home in Gainesville, waiting for Samoa Joe to show up. However, Joe says that he is “not a monster”, saying that he has delivered on his promise to send AJ Styles back home to his family, saying that he has “forced” the WWE Champion to “care” about his family. Joe continues, saying that he wants the Styles clan to enjoy tonight because a “very bad man” is going to take AJ’s title at WWE Hell in a Cell and AJ is going to go “night night”. Styles then appears on the Tron, saying that, when you threaten his family, that’s when the “talking stops”.

The WWE Champion would then have a surprise for his WWE Hell in a Cell opponent as AJ Styles was in the building and Styles would make his way to the ring. A brawl then breaks out between the bitter rivals with Joe sending AJ into the steel steps on the outside. Joe then grabs a steel chair, but AJ connects with the Phenomenal Forearm before grabbing the chair himself. The WWE Champion then swings the weapon at the head of Samoa Joe but Joe moves out of the way just in time before referees rush out to try and break it up. AJ then gets in the ring so that he can dive out of it, taking out Joe as well as a referee! Paige then comes out, pleading with AJ to think about his family and stop the assault. Styles would try to make another run at Joe but the referees are able to keep the WWE Champion back for the time being.

Then it was time for the main event as, after hearing about Maryse badmouthing her, Carmella would agree to be in the corner of R-Truth as R-Truth would go one-on-one with his former tag team partner The Miz, with Maryse in his corner. During the match, The Miz would set R-Truth up for the Skull Crushing Finale but the arrival of Daniel Bryan & Brie Bella would distract The Miz long enough for R-Truth to counter into a roll-up to score the upset over The Miz! After the match, Daniel would attack The Miz in the ring, locking in the Yes Lock as Brie chases Maryse around and into the ring, blasting Maryse with a kick to the face. However, just as Brie is about to deliver the running knee to Maryse, Zelina Vega pulls Brie out of the ring, decking brie with a right hand. Likewise, Andrade “Cien” Almas would attack Daniel Bryan, sending Daniel into the steel steps and, as The Miz & Maryse escape, Daniel & Brie fight back a Daniel locks in the Yes Lock on Almas while Brie locks in the Yes Lock on Zelina, making Andrade & Zelina tap out as The Miz & Maryse watch with fear on the outside. The Miz then tries to rush the ring but thinks better of it, leaving Daniel & Brie standing tall in the ring.