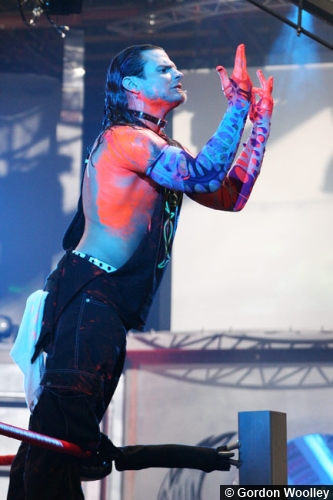 With SmackDown LIVE taking place on the 16th anniversary of the tragic events of September 11, 2001, the bell is tolled eleven times in honor of those lost on 9/11 to kick off the show. This is followed by Jeff Hardy making his way to the ring as “The Charismatic Enigma” was set for action five nights before he faces Randy Orton inside Hell in a Cell. Before his match, Jeff says that he has overcome his “demons” and he stands before them as a “better man”. Jeff then says that he faces his most “venomous demon” this Sunday inside Hell in a Cell, saying that he is a “daredevil” and he has no fear. Jeff continues, saying that he is going to unleash a “lifetime of torment, pain, and suffering” onto Randy Orton until Orton is forced to “fade away and classify himself as obsolete”. Jeff then concludes by saying that he is going to “hell” this Sunday and telling everyone to enjoy the show.

The opening match of the night would then see Jeff Hardy face a familiar rival in United States Champion Shinsuke Nakamura in a non-title match. During the match, Jeff Hardy would head to the top rope for the Swanton Bomb, but this is when Randy Orton would interfere, knocking Jeff off of the top rope to end the match in a disqualification. After the match, Orton would slam Jeff’s head into the steel steps before bringing Jeff into the ring as “The Viper” would tee off on his Hell in a Cell opponent with a series of steel chair shots. Orton then sizes Jeff up for the RKO but Jeff battles back, using the steel chair to get the better of “The Viper” before planting Orton with the Twist of Fate and following it up with the Swanton Bomb. Jeff then stands tall over his bitter rival, seeming perfectly capable of taking it to Randy Orton inside Hell in a Cell.

In comments made prior to SmackDown LIVE, WWE Champion AJ Styles addresses Samoa Joe, calling his WWE Hell in a Cell opponent a “piece of garbage” and saying that “no one has the upper hand” on AJ Styles in the ring. AJ then says that, this Sunday, he is going to show Samoa Joe just how “phenomenal” he is, saying that SmackDown LIVE is “the house that AJ Styles built” and the house isn’t “for rent” and it certainly isn’t “for sale”.

Before she defends the SmackDown Women’s Title against Becky Lynch at WWE Hell in a Cell, SmackDown Women’s Champion Charlotte Flair would go one-on-one with Sonya Deville, with Mandy Rose in her corner, in a non-title match. In the end, it was Charlotte Flair locking in the Figure-Eight, making Sonya Deville tap out to pick up the win. After the match, Charlotte Flair would be ambushed by a disguised Becky Lynch as Becky would attack the champion, locking in the Dis-Arm-Her on her former best friend, making a clear statement ahead of their title match at WWE Hell in a Cell.

With Mixed Match Challenge partner Carmella in his corner, R-Truth would go one-on-one with Andrade “Cien” Almas, with Zelina Vega in his corner. During the match, Carmella would pull Zelina Vega out of the ring and this would distract Andrade “Cien” Almas but R-Truth would fail to take advantage as Andrade would counter with a roll-up, grabbing the gear of R-Truth for the illegal advantage, scoring the three-count and the win.

Then it was time for the main event as, for the first time in eight years, Brie Bella, with Daniel Bryan in her corner, would go one-on-one with Maryse, with The Miz in her corner, in Maryse’s first match on SmackDown LIVE in seven years. During the match, The Miz would grab a microphone to say that Lafayette doesn’t deserve this match, saying that this match is over. The Miz & Maryse then start to leave but Brie Bella would not let that happen, bringing Maryse back to the ring.

Shortly after this, shenanigans would ensue as The Miz and Daniel Bryan would brawl in the ring with The Miz tossing Daniel out of the ring with Daniel accidentally colliding with Brie on the outside. Daniel would tend to his wife and The Miz would use this opportunity to blindside Daniel Bryan, taking Daniel out. Maryse then brings Brie back into the ring before The Miz gets in the ring for the distraction, sparking another brawl between The Miz and Daniel Bryan. Daniel gets the better of “The A-Lister” before Brie punches The Miz in the face and Daniel sends The Miz out of the ring. This leaves Daniel & Brie standing tall in the ring as The Miz & Maryse regroup on the stage.