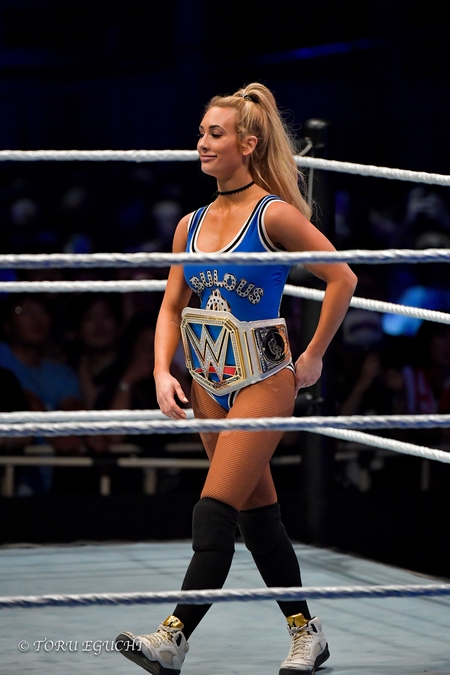 With SmackDown Women’s Champion Carmella a guest on commentary, Becky Lynch & Charlotte Flair would face Mandy Rose & Sonya Deville in the opening match of the night. In the end, it was Becky Lynch locking in the Dis-Arm-Her on Mandy Rose, making Mandy tap out to pick up the win for herself and Charlotte Flair. Becky & Charlotte then stare down Carmella, who stands tall on the announce table with her title held high.

Before they defend the SmackDown Tag Team Titles against The New Day at SummerSlam, SmackDown Tag Team Champions The Bludgeon Brothers would face a trio of local competitors calling themselves The Triple Threat in a 3-on-2 Handicap Match. However, the champions would not let the match begin, demolishing the three local talents in and out of the ring, making an example of The Triple Threat.

With their SmackDown Tag Team Title match against The Bludgeon Brothers coming up at SummerSlam, The New Day would face SAnitY in a 6-Man Tag match on SmackDown LIVE. In the end, it was Big E & Xavier Woods hitting the Up, Up, Down, Down on Killian Dain with Big E pinning Killian for the win.

Before he faces Shinsuke Nakamura in a rematch for the United States Title this Sunday at SummerSlam, Jeff Hardy would return to action on SmackDown LIVE as “The Charismatic Enigma” would go one-on-one with Shelton Benjamin. In the end, it was Jeff Hardy hitting the Twist of Fate and landing a splash on Shelton Benjamin, pinning Benjamin for the win. After the match, a distraction from Shelton Benjamin would give Shinsuke Nakamura the chance to attack Jeff Hardy from behind. However, Jeff would battle back against the United States Champion, hitting the Twist of Fate and the Swanton Bomb on Nakamura. However, lurking in the shadows was Randy Orton as “The Viper” keeps a close eye on the proceedings.

With his defense of the WWE Title against Samoa Joe coming up this Sunday at SummerSlam, WWE Champion AJ Styles would make an appearance on SmackDown LIVE to address Samoa Joe. AJ says that Joe got him to lose his cool by talking about AJ’s family, saying that Joe sent him to a “dark place”. AJ then recounts a conversation he had with his daughter before the WWE Champion is interrupted by Samoa Joe. Joe would read a letter from a fan who says that Joe’s comments about Styles made the fan “physically ill” because what Joe said was true. Joe then reads that Styles is a great champion because he will do anything to “stay away from his family” before saying that the fan says that they hope that Joe wins at SummerSlam so AJ can know the feeling of losing what he “loves the most” just like the fan does before Joe claims that the letter is from AJ’s daughter. This wipes the smile off of AJ’s face and puts a smile on the face of Samoa Joe as the sinister challenger continues to play personal mind games with the WWE Champion heading into SummerSlam.