Despite the show pushing an agenda that has Camille as a continual trainwreck, she really hasn’t done anything all that outrageous. So let’s watch her start now.

She begins this episode by waking up in Richard’s motel room. He’s noticed that she keeps her clothes on and that’s just one of the cagey things about her, so he’ll spend the bulk of the episode trying to figure her out. Not by asking her, mind you, but by investigating her. Good thing there’s nothing else he needs to be working on. 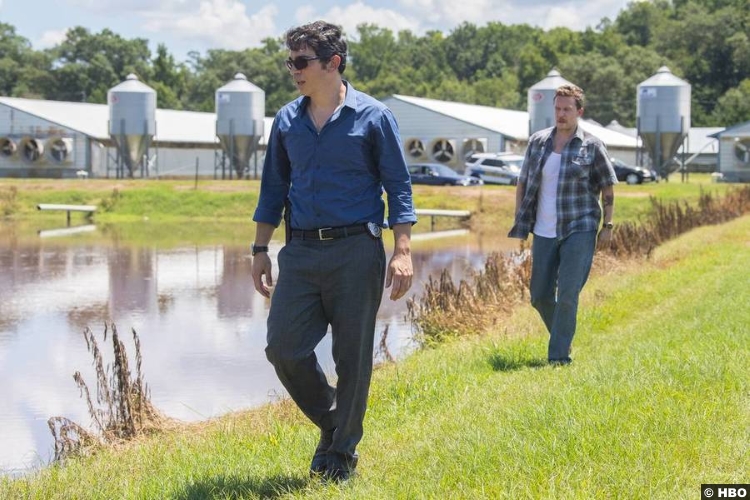 On second thought, maybe it’s better he stays off the murder case, considering the pig’s ear he and Vickery make of a new crime scene. A worker at the Crellin Hog Head Emporium reports finding a bike in a waste pond. First, Bob Nash and Adora are allowed to trample all over the scene. Then Richard grabs the bike with one bare hand and wipes off the seat with a towel so Bob can see if it’s his daughter’s. It is, but good luck with all your contaminated evidence now.

If the next scene had been him just being handed Camille’s file at the mental hospital, I would have thrown my (nonalcoholic) drink through the screen. Thankfully, it’s not–he just gets general information about why someone might stay there–although he does find out that Camille left after her roommate poisoned herself. 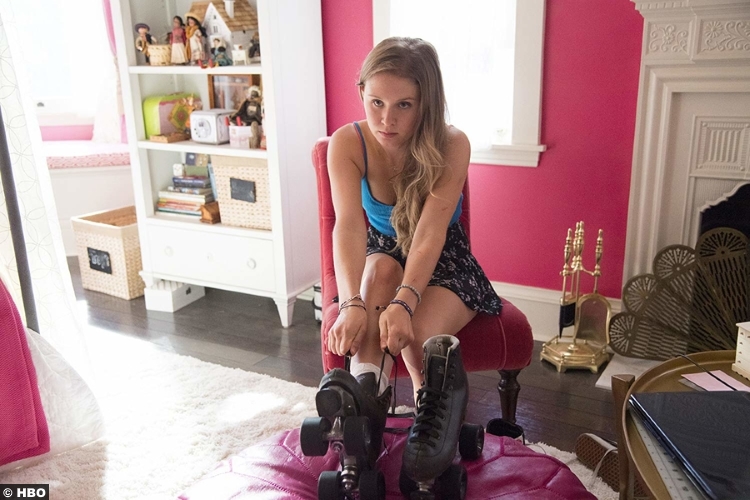 This he tells to Jackie, whom he’s trying to pump for information. She doesn’t give him much, but you can see the wheels turning when he mentions poisoning. “Dead girls everywhere.” Maybe that’s why he asks later about Marian’s death, specifically about whether an autopsy was performed. It wasn’t, because Adora wouldn’t allow it.

Adora doesn’t even bother to mention the bike to Camille, by the way. This sets off another tiff between mother and daughter that has Adora urging Alan to throw Camille out. He tries in his own emotionally frozen way to make Camille sympathize with Adora, but he does so by comparing Camille to her grandmother, who was cruel to Adora. That and his comment about Camille being jealous of other people’s happiness are far meaner than what he says about her leaving, which is “I’m going to have to ask you to leave if these conditions don’t improve.” 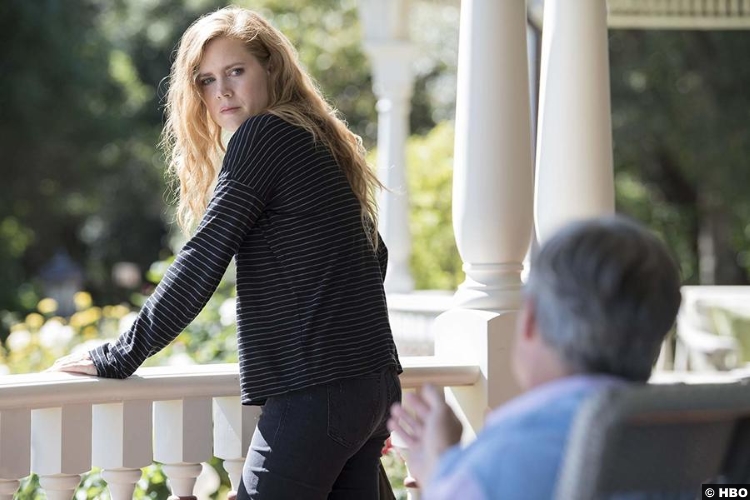 Camille should leave, of course. Being back in her childhood home is not good for her in any way. But the thing is, if she got a motel room, then Adora would have kittens over that. What would the neighbors think?! Did you hear that Adora Crellin’s own daughter doesn’t even want to stay with her? And so on.

She does leave, but only to attend the weekly pity party her old high school pals throw, wherein they watch Beaches and cry and then cry about their lives. I really didn’t care for these scenes–the dialogue played like, well, tv and movie talk (“Feminism means letting women make the choices they want”). Maybe women somewhere really do talk like that, but it all seemed a little over the top. The only part that rang true for me is when Kirk tried to apologize for his part in raping Camille by saying that having daughters really changed his perspective. That “as a father” talk happens all the time, unfortunately. At least Becca (Hilary Ward), as sad as her revelations were, was a breath of fresh air. Why haven’t we seen more of her? 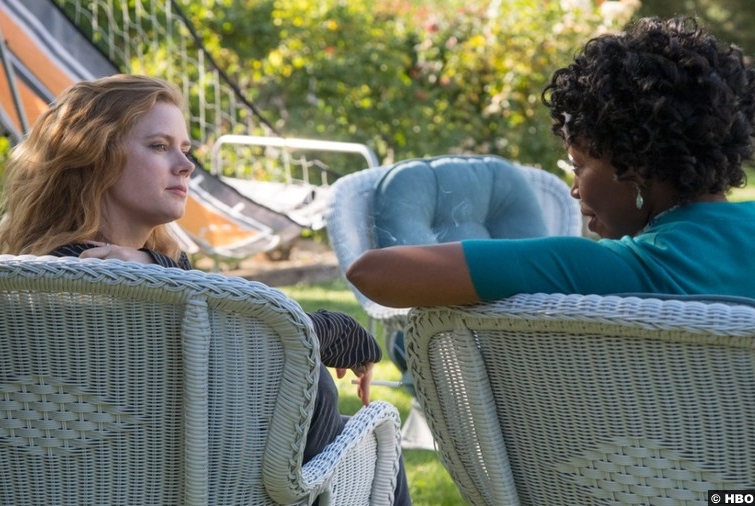 After the pity party, Camille runs into Amma and her little dogs, too. Maybe it’s because Camille has been drinking, maybe it was the afternoon with the gals and the run-in with Kirk and the conversations with Adora and Alan, but for some reason, she agrees to go with Amma and the gang. The promised ride home turns into taking Oxy on the way to a house party, where Camille takes molly administered from Amma’s mouth. (Yes, after last year’s Mr. Mercedes AND The Sinner, I was hoping I’d be free of a summer of incestuous vibes. * five-second long sigh* Almost.)

Also briefly at the party are John and Ashley. They’re asked to leave because John is a murderer (or so people want to believe, especially when a Crellin’s Hogorama employee IDs John as the person who left the bike). Initially, though, Ashley is more upset that she won’t be the star of Camille’s next piece. Camille brushes off her petty insults by asking who gnawed on her ear–was it Natalie? Ashley angrily retorts that Camille should ask Adora if she wants to know what Natalie was really like.

I wonder if high af Camille will remember that. Anyway, she and Amma make their way home, where Amma says a bunch of terrifying shit. Lessee, she quotes Machiavelli, says it’s easy to control girls but harder to make them like you, asks to live with Camille in St. Louis, muses about knowing something bad is going to happen and being unable to stop it. It’s no wonder that Camille has a vision of Marian then, who’s not just hovering, who reaches out and tells her, “It’s not safe for you here.” The kids aren’t alright.

8/10 – This episode was a bit overstuffed, but there were some good clues laced in there. The show obviously would like us to believe that the murderer is John Keene, what with the evidence found and Camille overhearing his telling Amma that “[her] day” will come. But as Camille herself points out, dumping the bike in a shallow waste pond is an act done by either the world’s dumbest or laziest killer. It seems so contrived as if someone’s really trying to point the finger at John. But who could that be? Who’s calling him a murderer?

Also, ps: Amy Adams and Patricia Clarkson are great, no duh, but I’d also like to recognize Eliza Scanlen, who is doing amazing work. Her Beth March is going to put me in a coma of tears, I just know it.