Your SO OF COURSE preview of WWE BACKLASH 2018

LAST TIME ON SO OF COURSE, it was the big tuna, WRESTLEMANIA, which featured a first half that was on its way to being a top-five event, followed by a second half that just…

You ever have that dream where you’re on a roller coaster and the hills get crazier and crazier until you just launch out of your seat and fall to the ground, then you wake up in a pool of sweat and unine?

That was Mania…followed by waking up in Saudi Arabia, where the flags are green and the girls are pretty, but oh they’re forced to stay at home (yeah yeah).

Now comes Backlash, and because WWE has not learned their lesson about over-stuffing their shows, we’re getting both brands represented from now on, which means a hodgepodge of red and blue predictions. So let’s just use the traditional greyscale in our SO OF COURSE pictures, eh? So without further ado, let’s look at the card and think about all the ways Vince can screw up WWE BACK TO THE POST-WRESTLEMANIA LULL SEE YOU AT SUMMERSLAM 1/3 OF THE WWE AUDIENCE 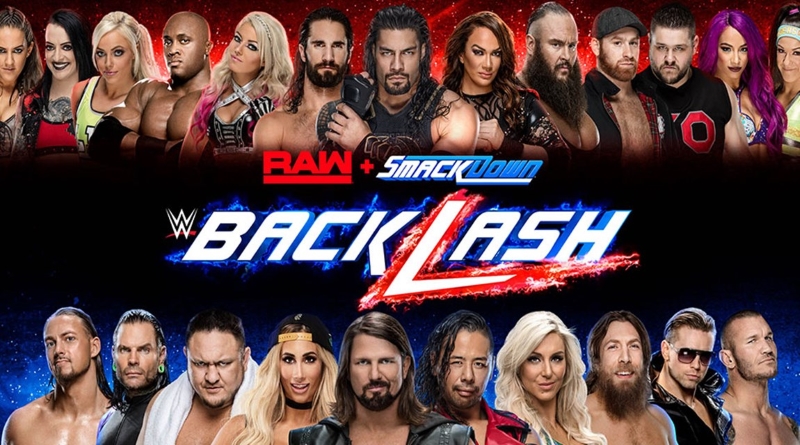 What it is: One more wellness violation from either of you and you’re out of here. This will be more boring than you might think. Jeff’s a half step slower than his glory days and Randy’s top speed is basically stuck on “half step slower.” There’s not much of a spark to this feud, but unlike the IC title match, it doesn’t have one of the best wrestlers in the world or a heat magnet to elevate it.

What it should be: Hardy winning and moving on to a feud with Andrade Cien Almas.

SETH ROLLINS vs THE MIZ

What it is: The best wrestler (and second-hottest babyface) on Raw vs the best heel in the company. It ought to be a match that brings great heat. That being said, it’s a match that’s handicapped by two major problems: For one thing, Miz has been traded to SmackDown, taking all the potential for a title change with him. Sure, Vince has been known to flip the apple cart and “SWERVE!” for the sake of it, but odds are Seth is retaining, so there goes a critical component of any wrestling match: who wins. The other problem is the sidelining of Finn Balor. I suppose they’re playing a long-game with the Finn vs Seth feud, and I hope it features a Balor heel turn (it would give the feud a spark, and elevate both guys, IMO). As for this, it’ll be an interesting match, and I’m curious to see if Seth slows down to Miz’ speed or if Miz works faster to keep up with Seth. Storytelling says they should do the former, but for the sake of entertainment, I hope they work fast.

What it should be: Seth retaining via a Finn Balor screwjob. As hot as people are for Seth, they will transfer that heat to Finn in a negative way, giving the feud a real energy. It would help both guys to have a popular feud in the middle of Raw each week, and it’ll help the IC title to have two of the best workers in the world fighting over it.

What it is: Alexa trolling Nia Jax forever. Or not: I don’t care who she feuds with as long as she keeps doing the Moments of Bliss. Alexa has never been a top shelf worker; her skill has always been in her character and she’s taken it to another level lately. She’s reached that point where her feuds don’t need the title; they can stand on their own.

What it should be: Nia getting the win and moving on to a new feud. Alexa can have a segment or two a week, doing her thing being awesome.

What it is: A win for Braun, sorry Ko and Sami.

What it should be: A win for Braun, sorry KO and Sami.

What it is: Daniel Bryan’s first “regular old PPV” match since No Way Out 2015 or whatever that February PPV was called, I’m too lazy to Google it. That’s a weird stat but it’s something.

What it should be: My heart says Daniel Bryan, but my head says Big Cass. He’s the fragile newbie and needs a statement win lest he be treated like a joke. It’s a thin line between monster heel and paper tiger, and the difference isn’t that he loses, it’s when he loses. You don’t talk trash week after week and then lose on your first PPV fight.

So even if it’s a pull-the-tights sort of cheat, give Cass the win and let Bryan finally put him in his place next month. Or don’t: You can always have Miz do an old school run-in and help Cass get the win next month too, and just delay delay delay the inevitable Miz vs Bryan feud (which too should feature more than a few Miz victories).

What it is: A classic “chicken heel” wins the title from a dominant champ, then ducks and runs for as long as possible until finally, she gets what’s coming to her. These things usually get drug out for a month or two before a cage gets involved.

What it should be: A couple months of this before a cage gets involved, probably at Extreme Rules in July. The thrill of the chase is such a simple art that is often ruined by rushed-gratification. Let the fans build up the desire to see Carmella get got. A couple weeks of her strutting, drowned by Great Royal Rumbles and Brand Switches is not enough time to milk this.

What it is: Who the heck knows.

What it should be: Joe trouncing Reigns. It accomplishes two tasks: Joe gets to waltz into SmackDown with some momentum and Roman gets the final nail in the coffin of the current (dead) iteration of his character. Roman needs a complete makeover. New music, new attire, new everything. He somehow has managed to occupy a space where fans expect him to win every match despite him losing all the big matches he’s in lately, despite actually winning WAY more matches than he loses. It’s like a terrible roller coaster (see above analogy).

It would be such a WWE thing to do to have Roman lose the important match (Lesnar for the title) then beat the guy who made fun of him for losing the important match and THAT win be treated as important as winning the title. It’s stupid and predictable. It helps no one. It changes nothing.

What it should be: The match they wanted us to get hyped for at WrestleMania. It’s no DQ which means dramatic rising forearms to the balls are allowed, which means its time for the villain to get his comeuppance (that’s a heck of a pun I’m super proud of) just when he thinks he’s got the perfect match for him to win the title. AJ wears a cup, Nak goes for the kill, WHAM, he staggers and reels, and AJ hits HIM in the bon bons and wins the match. Easy peasy. Do the title change next month at Money in the Bank.