On Sunday, AJ Styles accomplished what seemed impossible a few years ago. The sub-six foot pro wrestler, famous as one of the three biggest names in the history of TNA (along with Sting and Kurt Angle), and also the most “homegrown” superstar that promotion ever had in the main event, AJ Styles is now the reigning WWE Champion.

It’s not just unlikely, it’s downright remarkable. Even more so than the Daniel Bryan win at WrestleMania 30, or the rise of any other “smaller” or “indie” superstar in past few years in WWE (Finn Balor and Kevin Owens in particular), AJ Styles ascension to the top of the ladder is the greatest example of just how much things have changed with Vince’s promotion. The influence of Triple H is all over this, which is even more remarkable when you consider his own reputation during his full-time wrestling days.

Honestly the whole thing still feels like a dream….but a very good dream. How did we get here?

Styles—real name Allen Jones—began training as a wrestler in 1998 after leaving college midway through his term (he had received a partial scholarship as an amateur wrestler). He spent the next couple years bouncing around small, independent promotions, being just good enough not to embarrass himself, but generally not great enough to get any major publicity or big contracts. At the time there were three places to land: The WWF, ECW and WCW. ECW was not his style (or vice-versa) and the WWF by all accounts never even knew his name (He had adopted the AJ Styles persona by the end of 1999).

WCW however, did discover Styles and offered him a small contract. This was in late 2000 and in February of 2001, Styles made his WCW debut on an episode of Thunder, losing  a throwaway tag match while showing a hint of what he was capable of. A week later he won a match (against Disco Inferno!) but again it was a go-nowhere bout that no one paid any attention to. A few weeks later he made his Nitro debut, competing in a tournament to crown the inaugural WCW Cruiserweight Tag Team Champions. He and his partner lost to the eventual champs and a couple weeks later, on Thunder, they lost again. Styles was going nowhere in WCW, but at least he had a job… 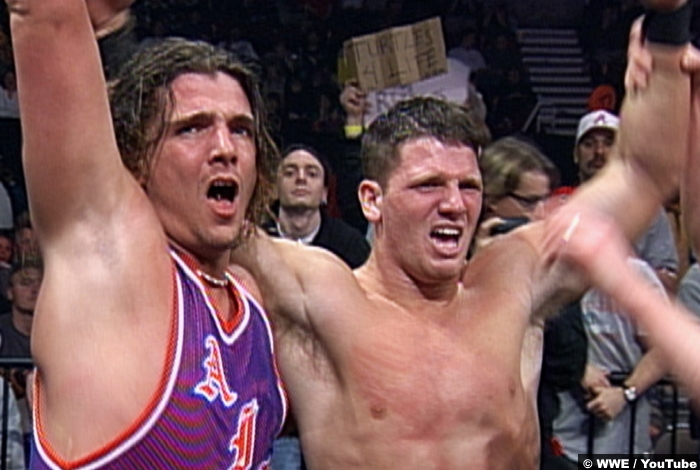 One week later, WCW folded, Vince McMahon bought the rights and history for pennies, and quickly acquired whatever top talent he could in the cheapest way possible (seriously, the guy was a billionaire at the financial peak of his career, but he was too cheap to sign Goldberg). Most of the big names sat out their contracts, the midcard talent was scooped up and the jobbers were sent packing.

AJ Styles was given a tryout in the WWF, working two matches in January of 2002. On an episode of Metal (like a “D” show, comparable to “Superstars”) he lost to The Hurricane. A couple weeks later he worked a dark match before a Smackdown taping and lost to…Rico? Remember Rico? Don’t bother googling. WWE declined to sign him but did offer him a development contract through their satellite promotion, Heartland Wrestling (based out of Cincinnati). Back then, being in “developmental” was nothing like being sent to NXT. He might have spent years in Cincinnati, never to see the light of day on Raw or Smackdown. Styles declined the very low-ball offer and found his way elsewhere.

It was in Ring of Honor that Styles first blossomed into the man who would become the AJ Styles we know today. Almost as soon as he joined the promotion (in 2002) he was pushed as a featured talent and though he never won the ROH World Title, he did spend two years working with some of the best wrestlers around (guys like Brian Danielson, Samoa Joe and CM Punk) which helped him quickly to develop a varied and skilled moveset.

Almost as soon as he signed with ROH he also inked a deal with TNA (the two promotions essentially rose out of the ashes of the defunct ECW and WCW), becoming the start-up wrestling company’s first signed-talent. Both promotions allowed (initially) for their wrestlers to work with other companies, and Styles spent the next two years being a top player for the two biggest non-WWE wrestling brands in North America. Within his first year in both companies he won the top non-World title prizes available (the ROH #1 Contenders trophy and the TNA X-Division championship). He also held the tag titles for both promotions. 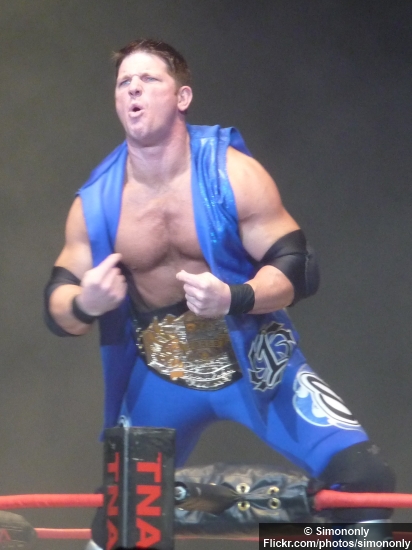 A year after debuting with TNA, Styles won the NWA World Heavyweight Championship (which was partnered with the TNA promotion for the first several years of the company’s existence). He ended up being one of only two men (along with TNA founder Jeff Jarrett) to hold the NWA title three times with TNA. Once the company switched to their own world title, AJ was own of the first people to win it. But after dropping the title, he meandered around the aimless promotion for years before being given another chance to be the top superstar. By then, the once-promising “young” talent, had become a disgruntled “veteran,” frustrated by an incompetent manager that didn’t appreciate what she had in him. Instead of building the whole show around him, Dixie Carter kept turning to cast-aways and has-beens. Hulk Hogan, Rob Van Dam, Sting, even guys like Ric Flair, Mick Foley and Kevin Nash were given more time, more attention, and more money.

After more than a decade of loyal performing and being the heart and soul of the company, Dixie asked Styles to take a paycut. He refused, negotiations stalled, AJ was stripped of his World Title (that’s right, they asked the World Champ to take a paycut…which just goes to show how little Dixie Carter understood anything about pro wrestling) and he was done.

After bouncing around between Ring of Honor and some even-smaller independent groups, Styles landed in New Japan Pro Wrestling and, as he’d done in ROH and TNA, quickly shot up the ladder to become a guy worth building the show around. In fact, in his first match with the company, he won the prestigious IWGP Heavyweight Championship, becoming only the 6th (out of 27) non-Japanese superstar to do so, and the first since Brock Lesnar won the strap in 2005. He dominated the New Japan scene for two years, leading the Bullet Club (essentially a 21st century version of the nWo) and—now free from TNA’s stench—being recognized as one of, if not the, top wrestlers in the world. 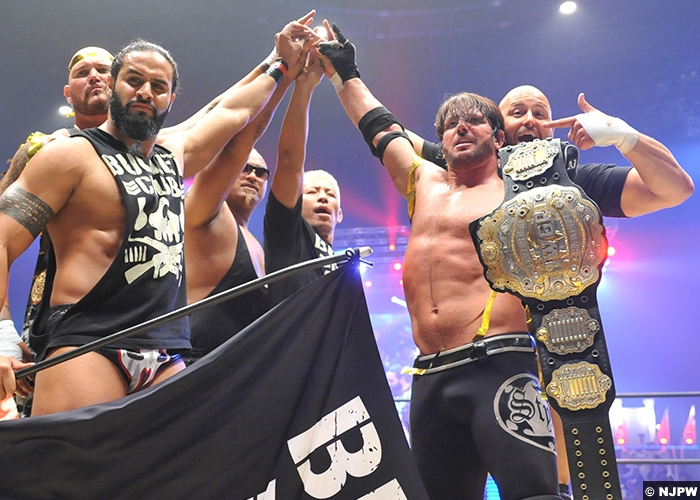 By this point, things had changed in WWE.

You can argue it started with CM Punk’s pipebomb, which brought the company the greatest mainstream exposure (directed at a wrestler/angle) since the Attitude Era, but Punk was not the guy to lead such a revolution. He was the martyr who suffered to jump-start it. Still, the fans embraced Punk’s call for new talent to be pushed, and responded by hijacking Raw and forcing Daniel Bryan into the main event of WrestleMania 30. At the same time, Triple H was embracing a corporate role in WWE and was learning to love the little indie guys he looked down on for so many years. Sami Zayn, Kevin Owens, Finn Balor, Samoa Joa and others all found a place in WWE—which they might not ever have found before—thanks to NXT.

AJ Styles waited a long time to reach the mountain top but when he finally got the offer to join the WWE, the timing could not have been more perfect. Unlike the others just mentioned, he jumped straight to the main roster, debuting at the Royal Rumble as a (badly kept secret) surprise entrant, lasting deep into the contest. From there he feuded with Chris Jericho, challenged the then-unstoppable Roman Reigns for the WWE Title, turned heel on John Cena and became the top villain on the Smackdown brand. Just as he did at Ring of Honor, TNA and New Japan, within a year of signing he has shown himself to be a guy talented enough to build the show around.

Last Sunday, the WWE made it clear they plan on doing just that. 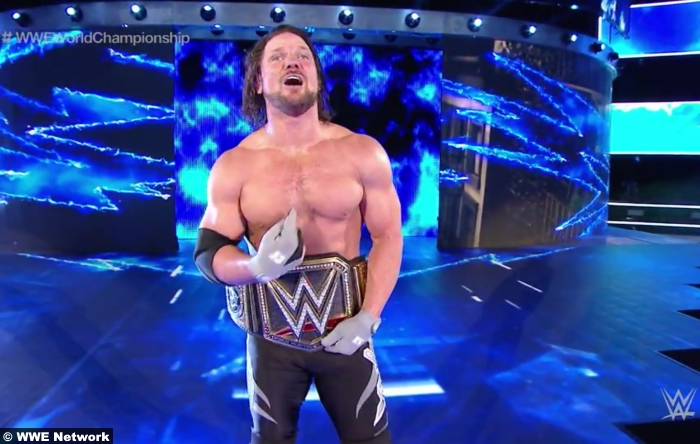 What a journey AJ Styles has had. He started out as a cruiserweight that the WWF didn’t even want when WCW folded and became arguably the biggest name they had yet to sign. And when he did finally sign, they didn’t sent him to development. They didn’t drop him into midcard purgatory.  They gave him a main-event debut, booked him to defeat The Man John Cena, clean (!) on the second biggest show of the year, and then put the top championship in the company around his waist.

That’s a big deal, too. Vince is very protective of the actual WWF/E Championship lineage. A guy like Dolph Ziggler or Great Khali may be able to say they were “world champions” but they only held the (Big Gold) World Heavyweight Title. That belt may mean something to most wrestling fans, but it means zilch to Vince McMahon. His belt, his championship, the WWE World Title is “the most prestigious prize in the industry” (as he has his puppets on commentary  bark out at least three times a month).  Whether it’s the top belt on Mondays or Tuesdays, it will always carry top billing in the mind of McMahon.

The fact that it is now around the tattooed waist of a newly-signed, almost 40 year old, “short southerner from TNA” just shows how AJ has managed to connect with the “audience of one” that is Vince McMahon. More than anything else over the past several months, the finish to WWE Backlash demonstrated how it really is a new era in WWE.