April was a busy month for WWE, with the company holding two pay-per-views – the excellent Wrestlemania 22 event…. and WWE Backlash. This show had a controversial build up, in that ‘God’ was billed as an active participant in an advertised pay-per-view match, tagging with Shawn Michaels to face Vince and Shane McMahon. What might have been viewed as ‘edgy’ booking half a decade or so earlier, was viewed by many as an insult to intelligence in this instance, and to others was seen as downright offensive. Jim Ross and Jerry Lawler called the action on this show, foreshadowing JR’s permanent return to the Raw announce booth the following week. 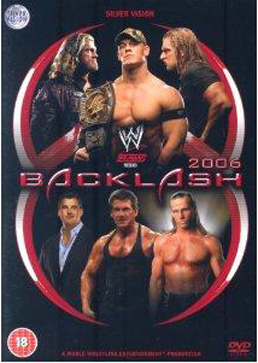 Disc 1 Chapters:13 chapters. These are entitled:

I felt this show, overall, was somewhat lacking to say the least. Here are my thoughts on the matches and segments:

Carlito vs Chris Masters was an average match between these two. Carlito was just starting to find his stride as a babyface, and Masters’ mind was clearly elsewhere during this match (he would begin his suspension from the company shortly after this match).

Ric Flair vs Umaga was no more than a three minute squash, the type that you might see every week for free on Raw. In hindsight, this match was part of building up Umaga into a ‘monster’ (by winning matches against ‘name’ opponents fairly quickly), and Flair was about to take some time off to get married in real life, so it served a purpose for both participants and future direction. It wasn’t pay-per-view worthy though.

Mickie James vs Trish Stratus actually started off as a pretty good match, but had to be inadvertently cut short at the four minute mark when Trish sustained a legitimate elbow injury falling off the ring apron. Even the improvised match finish was a cheap disqualification, when James refused to break a chokehold after a count of five.

Rob Van Dam vs Shelton Benjamin was one of the few bright spots on the card. These two had an impressive match together and were given nearly 20 minutes to do their thing. Probably the second best match on the show.

The worst match on the card was easily Kane vs Big Show. This was absolutely horrible, ending in a no-contest when Big Show hit Kane with a chair and simply got up and left the ring.

Following this match, there was a backstage segment featuring Vince with Candice. Vince pretended to ‘cure’ Candice of a chest cold. The acting here was off-the-page bad, even for WWE standards. It also wasn’t very funny either.

Shawn Michaels & ‘God’ vs Vince & Shane McMahon was an entertaining match, once it actually started. The guys all worked hard, and the Spirit Squad’s interference helped the match.

The best match on the show was the main event, the triple threat match for the WWE title, featuring John Cena vs Triple H vs Edge. This was an excellent match, with all three wrestlers working hard and putting on a great performance. The crowd really got into this and it was the undoubted highlight of the show.

So, the show itself – apart from two or three matches – was one of the weaker WWE pay-per-view efforts of the year. But would the extras on the DVD ‘save the day’ and make this a worthwhile purchase? Well, in a word – no. If you watch Raw regularly, then you will have already seen four of the six extras.

The McMahons visiting a church was kind of funny, although a little weird at times. The other three extras from Raw centre around the Joey Styles ‘quitting’ angle, that was the first stage of the ECW reformation. It was a good angle, and Joey cut a very good promo in his ‘leaving’ speech.

The two DVD exclusives were too short (less than two minutes each) videos. Both were taped backstage after Backlash went off the air. Todd Grisham attempted to interview a very bloody, and very angry, Triple H, who spoke menacingly about the situation not being over. The other video was Rob Van Dam approaching Joey Styles backstage, and basically giving him a pep talk, foreshadowing the following nights’ angle on Raw. I was surprised this hadn’t aired originally on the pay-per-view.

There are a couple of really good matches on the show, in the main event and the RVD vs Benjamin match, and even the Michaels & ‘God’ vs the McMahons match is entertaining. But the rest of the show is just worthless time filler at best, and bad matches and unfunny comedy at worst. There could have been more extras included too (for example, a Goldust vs Rob Conway match took place before the pay-per-view; I was surprised this wasn’t included as an extra on the DVD release).

If you’re on a budget, there are other WWE DVD releases that are worth getting more than this one.