REVIEW: Unsane is a solid thriller in a unique format

Throughout the history of cinema, the way in which we interact with movies has consistently evolved. From black and white silent movies, to the addition of sound, then color, then wider aspect ratios, 3D, then better 3D…you can even go to Disneyworld and take the smellovision ride and get that dimension added if you’re so inclined.

Even within the medium itself there have been…let’s call them “intra-evolutions.” Chris Nolan gave us Memento, a movie told in reverse. The Blair Witch Project revolutionized the “found footage” style of presenting a story. There’s…whatever the heck Being John Malkovich was.

There’s also the way in which our movies are shot. Chris Nolan loves him some IMAX. George Lucas swears by digital film. Peter Jackson tried to sell us on 48FPS. James Cameron is somewhere right now in his laboratory cooking up some movie theater with rotating chairs and where the walls, ceiling and floor are all the screen, etc.

In the age of Netflix and 4K HDTVs, it has never been easier or more tempting to skip the lines, the overpriced concessions, the sticky floors, the ticket prices and the people—my gosh the people—and instead just shut your blinds, take off your pants and watch a movie from your own chair. Hollywood knows this and thus the aforementioned innovations and gimmicks.

With that said, it’s interesting to see a movie like Unsane, whose primary “gimmick” is not in some expensive new toy that was used to make it. There’s no photorealistic dinosaurs, or immersive 3D environments, or G L O R I O U S  V I S T A V I S I O N and such like.

It’s a movie that cost less than two million dollars to make, with only a single name-actress (whose name you probably don’t know but she’s the Queen in the first two seasons of The Crown; great show) a format that’s basically the old “academy ratio” but not purposefully. It’s not like Tim Burton saying “a movie about Ed Wood needs to be in Black and White.” Unsane eschewing the standard widescreen format is a byproduct of the film’s biggest talking point:

It was filmed entirely with an iPhone. 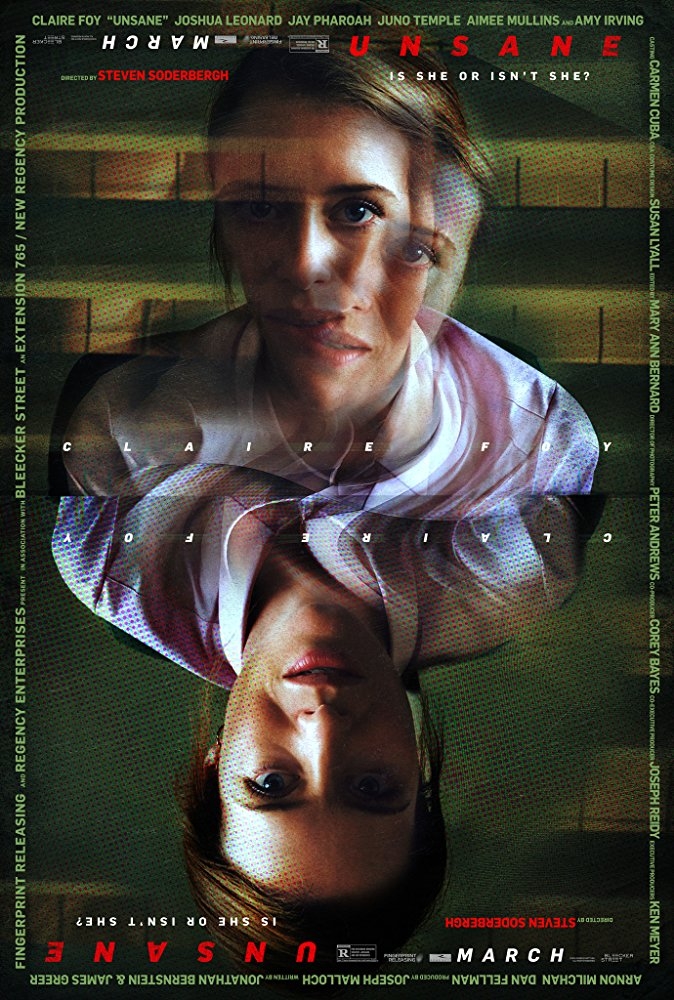 And it’s obvious it was filmed with an iPhone from scene one. Having said that, if you didn’t know it going in, you’d think the visual “effect” (poor depth, crushed blacks) was achieved through some post-production trickery. So does that mean director Steven Soderbergh is just passing off a mediocre movie with a marketing gimmick to score some cheap buzz? No, on every level: It’s not a mediocre movie, it’s not (just) a marketing gimmick, and it’s not about cheap “buzz.” Yes, this movie could have been shot on film and tweaked to look the way it does for “effect,” but what’s the point? Soderbergh proved that you could make the movie with an iPhone and thus at a fraction of a fraction of the cost. So why waste money?

Granted, the phone limits what you’re able to do visually, but that’s fine because within the genre of this movie, those limitations become virtues.

What is this movie? If you watch the trailer…

Your first thought is probably “the movie is about whether she is insane or not.” And while that’s a fair guess, and the movie even hints at going down that path early on, it becomes clear very quickly that something else is happening. This is not a horror film, it’s a thriller. Modern horror films rely on a slow building up of tension followed by a sudden release (the JUMP SCARE being the most famous example), a cool down period, then slow build-up of tension, rinse and repeat.

A thriller on the other hand, doesn’t give you the release. It slowly builds the tension, climbing higher and higher, then it plateaus, leveling off with your nerves ratcheted up but without the payoff…before climbing again, only to level off again, then climb again, etc. It’s not till the end that you finally get that sweet release.

That’s why a good thriller is much harder to pull off than a good horror film. It’s easy to be scared and a horror plot only needs to be serviceable to get you from scare A to scare B. A thriller, however, has to sustain your interest. You have to remain invested so you will stay with it while you climb higher and higher on the blood pressure mountain. If you delay the payoff too long, or if it’s not satisfying, or if the story breaks down mid-way, the movie is ruined, whereas a horror can just distract you with another BOO. 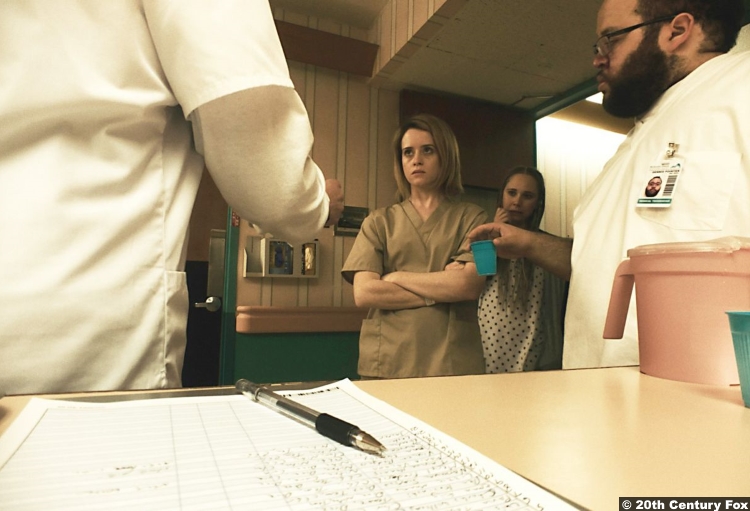 I could tell this was Soderbergh’s first time tackling that genre: Unsane gets a little too bogged down in the details the way a drama would, focusing on parts of the plot that aren’t important in this type of movie and repeats itself too much, to the point where the movie feels a good fifteen minutes too long despite already being just ninety minutes in length.

That said, the film does mostly work. As previously mentioned, the iPhone limited what Soderbergh could do visually, which gives the final product an arthouse feel, but it really made some of the more intense moments work. It especially made the claustrophobic scenes really pop.

It’s not going to revolutionize film, but that wasn’t its intention. If anything it was a proof of concept to show that you don’t need even amateur film-making tech to make a good movie happen. You probably already have exactly what you need in your hand right now.

Give it a chance.