Nintendo Switch: One Year Later – What it needs

The Nintendo Switch is nearing its second year on the market, with its one year anniversary coming in early March. Buoyed by the Game of the Year last year (The Legend of Zelda: Breath of the Wild) as its key launch title, and a steady stream of high-ranking exclusive software, the Switch has not only exceeded expectations, it has blown them away.

The system currently sits at about about thirteen million systems sold, with over a million units moved in December alone, making it the top-selling console for that month. In fact, for the ten full months the Switch has been on the market, it has been the best-selling console for six of those months. Enthusiasm is through the roof, Nintendo’s stock is skyrocketing, and fans new to Nintendo as well as the hardcore faithful are thrilled.

When the system was first announced, Nintendo expressed optimism that they would be able to push ten million units within its first full year on the market. They reached that goal three months early and managed to eclipse the WiiU’s lifetime sales number along the way. True to their word, the Big N has done an admirable job pumping out systems to meet demand. Despite it selling at a higher pace than the blockbuster Wii, Switch is more readily available than the Wii ever was in its first two years on the market.

To put that into perspective, the Wii enjoyed a December 2006 sales total of six-hundred thousand units, and that was within its launch window too. A year later, the Wii in December of 2007 sold about 1.35mm (about 200k fewer than the Switch did in its first December). Considering that a console’s sales number is supposed to be an upward-climbing trendline for the first several years of its life (as the game library grows and price drops/bundles happen), that’s a remarkable achievement.

Knowing the company has a fervent desire to ensure a steady supply of games and experiences are made available, it’s understandable that some cosmetic and supplementary features on the system were put on the back-burner. Resources devoted to a side-feature are really resources taken away from putting the final polish on Mario Odyssey or Xenoblade 2. It’s a tradeoff most fans were fine with.

But as we enter into year two and with a solid and growing library of games already available, it’s time to start looking at what the system “needs” in order to feel more robust and complete.

Here are five things Nintendo would do well to implement in 2018:

It was months before any non-gaming feature could be found on the system, but in November, Hulu was made available to download on the eshop. Hulu is fine but the big tuna everyone wants is Netflix. It’s the video streaming service available in 100mm homes. Yes it can be found on almost any compatible system, phone, tablet or smart TV but for completion’s sake, for convenience sake and just so that someone on the train can switch instantly from a quick game of Tetris to a quick episode of DareDevil, Netflix needs to come to Switch. If nothing else it’s a matter of perception. Everyone else has Netflix; you gotta keep up with the Jones’. 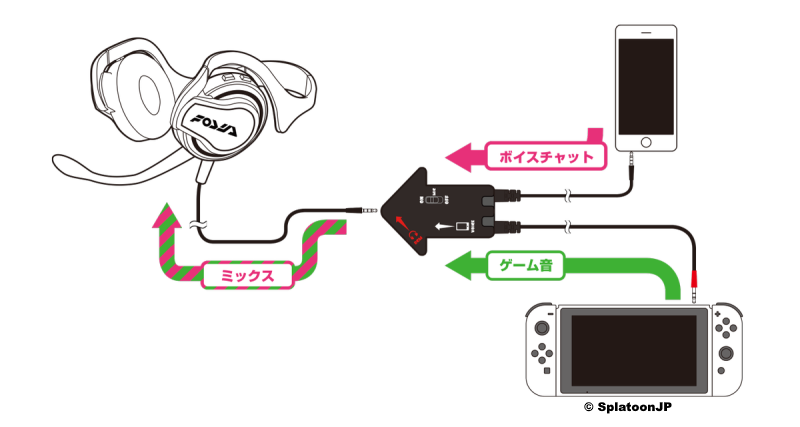 The Switch is online. It’s the easiest and most functional online service Nintendo has ever implemented (which isn’t saying much but…babysteps), but the ever-enigmatic company has been promising a very enigmatic, fully-featured online service to come. It was supposed to launch in the latter-half of 2017 and then was delayed until the first half of 2018, and now it seems to have been pushed back again to the second half of this year. There’s no rush I guess; no one is eager to pay yet another monthly subscription, even if this one is only a couple bucks a month, but I don’t like the anxiety that comes with waiting. If you’re gonna do it, do it. If you’re not then don’t tell me until you are doing it. 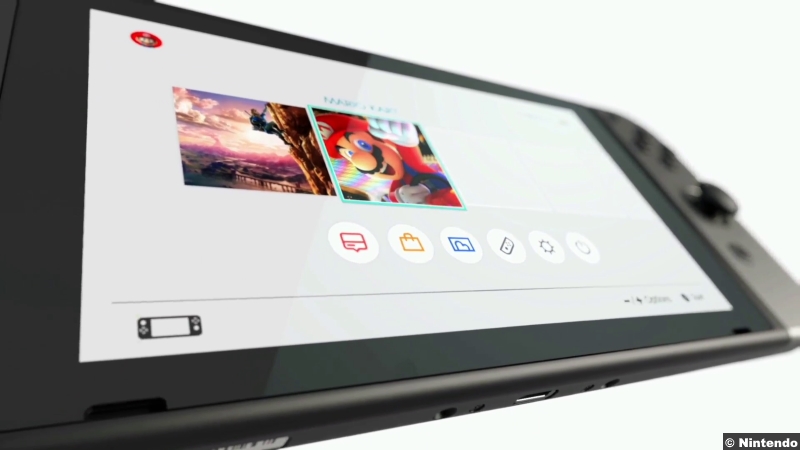 Right now you can go to your Switch settings, select the “themes” tab and choose from two options: light or dark. This seems like the easiest, most no-brainer little touch Nintendo could do: Give us more themes. This should have been there from the beginning. A Breath of the Wild theme, a Mario Kart theme, a Splatoon theme, a DOOM theme, a Mario Odyssey theme, etc. It doesn’t need to be any dramatic thing with new sound effects or even music (although music would be nice). Just a new background beyond the plain white or black. For a company that has always excelled at putting a little touch of whimsy on almost everything, it’s sad that their big seller is so…bland to behold. 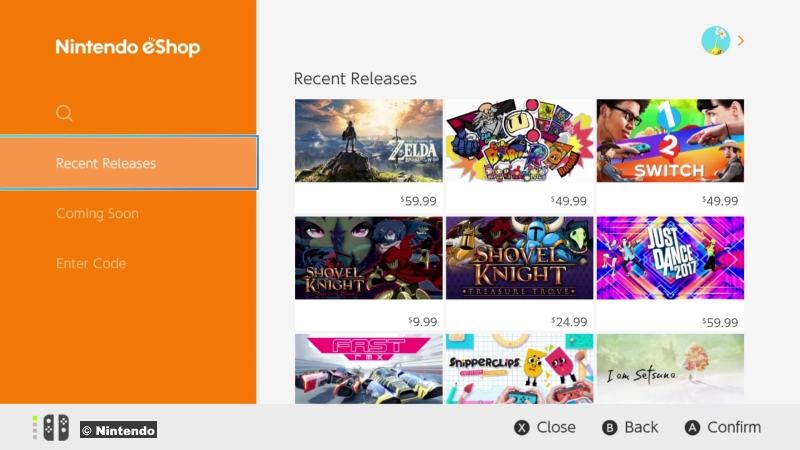 This is now Nintendo’s third (home console) generation of an online store. In terms of speed it blows the Wii and WiiU out of the water. In terms of navigation, on the other hand, it is merely adequate. The layout feels like a placeholder meant to be updated to something a little more aesthetically and functionally pleasing. That update should have come within the first month of its launch. After almost a year it is still the same series of long lists of games, with almost no arrangement or rhyme or reason to any of it. There have been minor improvements along the way (the ability to search for demos is wonderful) but a complete makeover is needed. Something akin to the WiiU’s present eshop layout, but pared back a little to match the minimalist style of the system. 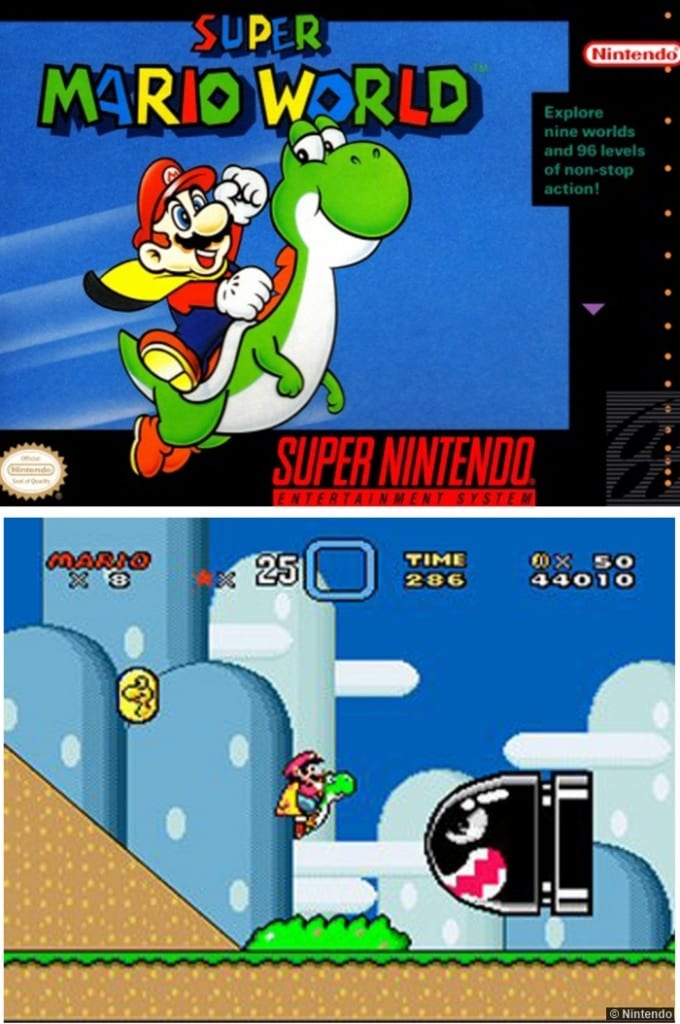 These are coming with the online service, so consider this an addendum to that. Nevertheless, it’s getting hard to swallow this seemingly endless stream of Neo Geo King of Fighters games that pop up every other week. Are all of those really necessary? Once you’ve played KOF 98 and KOF02, what else is there? The Super Mario Bros Arcade release was an interesting surprise, but we’re all ready for the NES, SNES, N64 and yes, Gamecube library to move up to the next console.

Rest assured, however: Even if Nintendo never bothers to doll up their too minimalist system, never gets around to launching that online service and never bothers giving Netflix the green light, the Switch is still going to sell like hotcakes.

But I’d like to have my cake and eat it too, please and thanks.