Super Mario Bros. has been around for over thirty years now and during that time the mascot of Nintendo and most recognizable face in gaming has seen a lot of systems and games come and go. Leaving aside the plethora of spin-off titles, sports-titles, RPGs and such like, there really have only been three ways to play a Mario game.

Originally, Mario was a 2D experience, as all games were in those days. The plumber could move from left to right and to a lesser extent from top to bottom. But there was no depth because he was constrained to a flat surface. Game mechanics were built around those limitations with obstacles to jump over and enemies to jump onto. The left-to-right presentation gave the games a constant sense of forward momentum and encouraged players to better their skills so that they could race through each level with precision. Nintendo also inserted a healthy amount of hidden treasures and secrets, to reward players who decided to take their time and explore. The pinnacle of this era of gaming was the one-two punch of Super Mario Bros 3 and it’s follow-up Super Mario World.

After Mario World, Nintendo moved their focus to the third dimension and used Mario as their tour guide to the new gaming possibilities that the N64 could provide. Mario 64 was a revelation. It was the first time since perhaps the beginning of the gaming industry that it felt like a truly new experience was now possible. There had been other 3D games before Mario 64 but not with the presentation, the controls and the overall polish that only Nintendo seems interested in providing. The game, like Marios 3 and World, was hailed as “perfect” by everyone. Time has diminished it a bit, however: The environments are sparse, the camera is clunky, the enemy variety is limited. At times it didn’t feel like a Mario game, but more like a new 3D adventure with a few Mario universe characters tossed in. Instead of an emphasis on jumping over and onto things, and getting from point-A to point-B, the 3D title focused on exploration and mission-based gameplay.  The Gamecube follow-up retained the gameplay, and improved the aesthetics significantly but somehow managed to make the camera worse (despite more user-control). Reviews were not as blinded by the revolution anymore and Super Mario Sunshine scored worse than its predecessor.

When the Wii was released, Nintendo decided to ditch the open world 3D mechanics and implement a gameplay style better suited to the casual fan. The third-dimension was retained but the levels became more linear; they were more like 3D versions of the old 2D games. Mario Galaxy 1-2 ended up being among the highest rated games on the system and some of the finest Mario experiences Nintendo has ever created. Nintendo continued with that gameplay style in the 3DS and WiiU games, Super Mario 3D Land/World. While both scored well, there was some pushback that perhaps Nintendo had gone too far in making the 3D levels so linear.

Along the way the company returned to its 2D roots with the “New” Super Mario Bros. series. The sub-franchise has seen releases on the DS, Wii, 3DS, and WiiU, and though the WiiU version was arguably the best of the bunch, it was a far cry from the tight and polished games released on the NES and SNES.

While developing their launch-year titles for the Nintendo Switch, the company knew they needed to appeal to casual and hardcore gamers and that they would need a bevy of AAA releases spread out across the year. Zelda was the natural launch title and it succeeded in giving the Switch a tremendous launch boost. Mario Kart, Arms and Spatoon 2 did their part in keeping interest high, but all eyes have been on the holiday season from the moment Nintendo announced a Springtime launch for the console. Microsoft is pushing their XBox One X and Sony is sure to drop a ton of PS4 bundles and discounts. Nintendo knew they would need a big killer app for the Switch’s first Christmas and so, even though the game has basically been ready to go since the early Summer, Mario’s newest title—Odyssey—was held back for a Fall release. 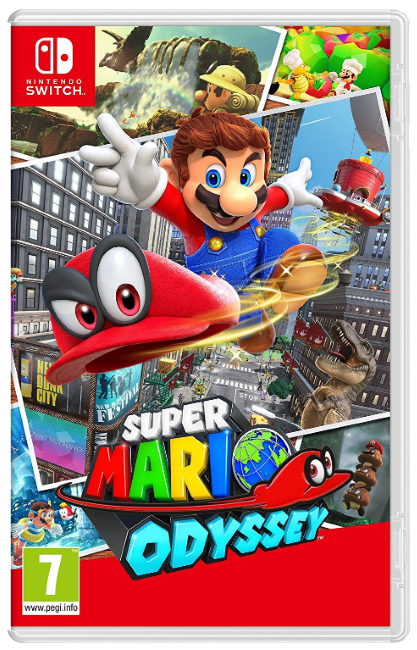 So what kind of Mario adventure is it? Is it a classic 2D game? Is it an open world 3D adventure? Is it a linear 3D action game?

At first glance you’d think it was another in the mold of Mario 64 and Sunshine, but spend a little time with it and you’ll see different: Super Mario Odyssey is the culmination of everything Nintendo ever did right with Mario…

The average time it takes to complete a level in the original Super Mario Bros. is thirty-seconds, depending on your skillset. For Mario 3, some levels can be aced in half that time. Sure, later levels would require multiple attempts, so you might spend half an hour on a single stage, but the levels themselves can be completed, when completed, in fifteen or twenty seconds. It’s that quick-burst feeling of accomplishment that kept you playing over and over. Just another level. Just another level. The fact that there were no save-states didn’t matter (who didn’t leave their NES games on pause all day while they were at school?), the levels were like slot-machines. Pull the level and you either win or lose so quickly you’re compelled to pull it again. 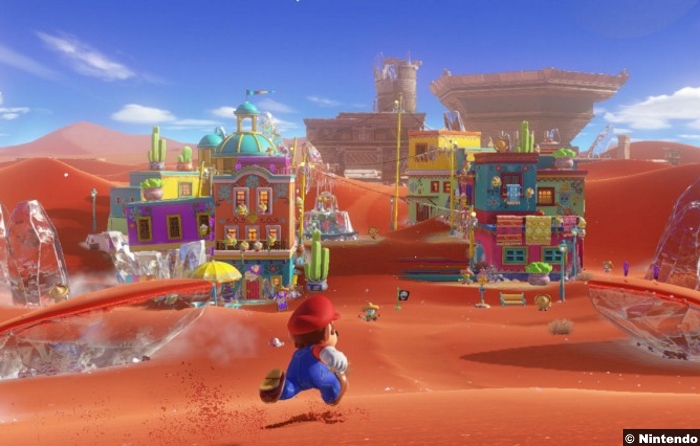 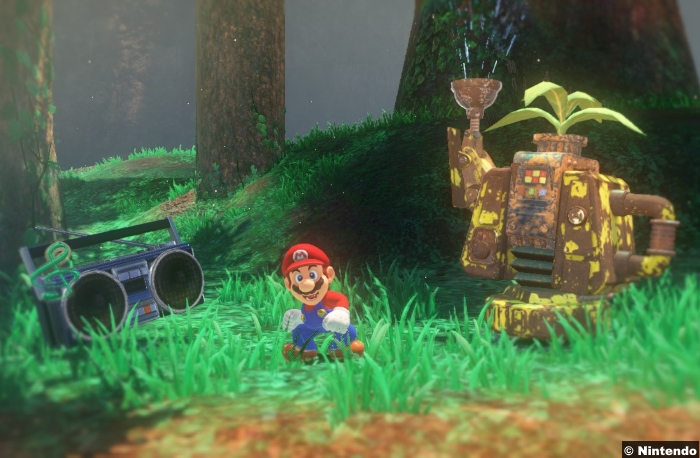 The open world, more leisurely pace of Mario 64 encouraged players to wander around, talk to NPCs, stumble upon a star-quest you weren’t even intending to and just get lost in the world. Unlike Mario 3 and World, with its almost-100 levels to play through, Mario 64 only had a little over a dozen stages. Yet a player could completely lose a whole Saturday just exploring one or two of them. Nintendo managed to find a completely different way from Mario 3 to achieve gaming addiction: A few long stages with lots to do, as opposed to a lot of short stages with one goal in front of you.

Mario Galaxy brought back the sense of forward momentum that the 2D games had, but in a 3D environment. And unlike Mario 64, the Galaxy games had much more of a Mario universe feel to its environments and characters. The astounding level variety in Mario 3 is ever-present in Mario Galaxy too. To me, the Galaxy games were the first time playing a 3D Mario felt like playing a 3D “Mario” game.

Odyssey retains the open world feel of 64, offers an incredible amount of variety in its levels just like Mario Galaxy (not only in its environments but in the little mini-areas within each one, and the different quests/adventures/actions needed to find certain objects), and has objectives that can be identified, played through, and completed in seconds, just like in Mario 3. And looking through my in-game quest log, it looks like there are as many objectives as there are Korok Seeds in Breath of the Wild…only checking these off the list is infinitely more rewarding. 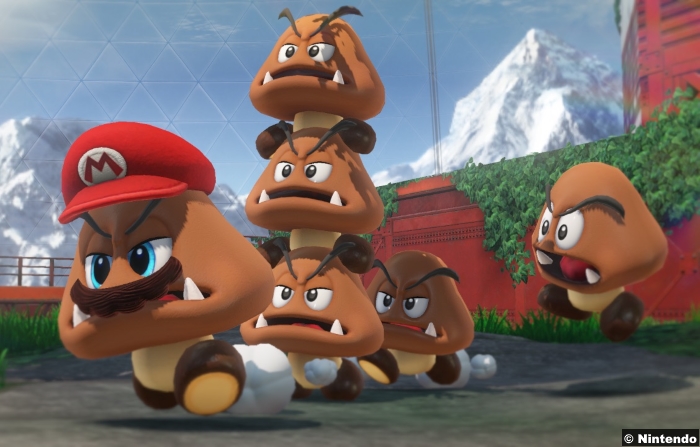 Of the three styles of Mario games, it’s true that this is most like the 64/Sunshine titles; there are no flagpoles at the end of each level; there are no ends. There are no LEVELS! There are almost twenty worlds to explore, each one bursting at the seams with goodies to find, secrets to unlock and “power moons” (the game’s big get) to collect. You can race through it and “beat” the game in a dozen hours, or you can let your attention wander as you try to finish the primary adventure and end up distracted on your way to the finish. That’ll take you about twenty or thirty hours. Or, you can meticulously comb ever inch of every world and spend as much time with Odyssesy as you probably spent with Zelda (and I spent over 150 hours with Zelda). For a Mario game, or even just a “3D Platformer” that’s a hilariously large amount of play-time. it’s almost unfair to all the other publishers who make and release their 3D adventure games with their “six hours to beat; 10 hours to complete” play-times.

Is the game perfect? No.

It retains a few of Nintendo’s signature annoyances, including the “jibberish” talk overlayed with captions, en lieu of actual voiced dialogue. At this point that’s just a thing that’s always going to be. The Switch is certainly capable of having all the dialogue it wants, but Nintendo is simply choosing not to bother with it for simplicity’s sake (it’s easier to port across various languages if all you have to do is tweak the captions).

Also, Mario controls a little too slippery for my taste. The 3D World game for WiiU probably had the tightest Mario mechanics in terms of movement, but those were not retained here. Odyssey is a little too loose. On the other hand, I’m using the joycon: I wonder if the pro controller, with its bigger sticks, is any better. As it is, I don’t always feel completely in control of Mario while running around and I have fallen off a platform once or twice because of it. That wasn’t a problem I ever had in previous 3D Mario games.

Finally, the game is a little too easy. I have never once felt in danger of dying. Even falling off a cliff merely brings about a minor setback and an opportunity to try again. There are no lives anymore, and that’s fine; that was a hold-over from gaming’s arcade days anyway. But in place of it is a game that lacks the feeling of anxiety that came with games gone by. My palms will never be sweaty when facing off against Bowser like they were at the end of Mario 3 or 64.

And yet, those complaints are minor, and they do not diminish the achievement in any way…

10/10 – No game is perfect, but a rare few are as good as you are likely to find in a generation. Super Mario Odyssey is one of those games.

Nintendo has released is the absolute culmination of all the smart, inventive, innovating and just plain fun things they’ve been doing with Mario for 30+ years. What’s even more remarkable is this is now twice in a single year they’ve done that (the other being Breath of the Wild). What a year they’ve had and it’s not even Christmas.

Hats off to you, Nintendo.