The summer belongs to Nintendo.

The Switch is now five months old and going strong—far stronger in its opening half-year than the WiiU could boast in its whole first year. The system is selling out left and right, and in some regions blocks-long lines are a common occurrence whenever a store gets a new shipment. Nintendo, for their part, assures everyone that they’re not intentionally holding back production in order to generate artificial demand; they’re pumping them out as fast as their little factories can make them. It’s just they can’t make them fast enough, it seems.

On the games front, assuming you are a fan of the e-shop you will find a plethora of titles to enjoy. Switch owners who don’t like to buy games digitally (and you really should reconsider) have fewer options to choose from, although so far Nintendo seems intent on keeping their “one big game per month” promise. But whether you go digital or love that sweet sweet new-cart smell, there’s plenty for everyone to enjoy on Nintendo Switch this summer… 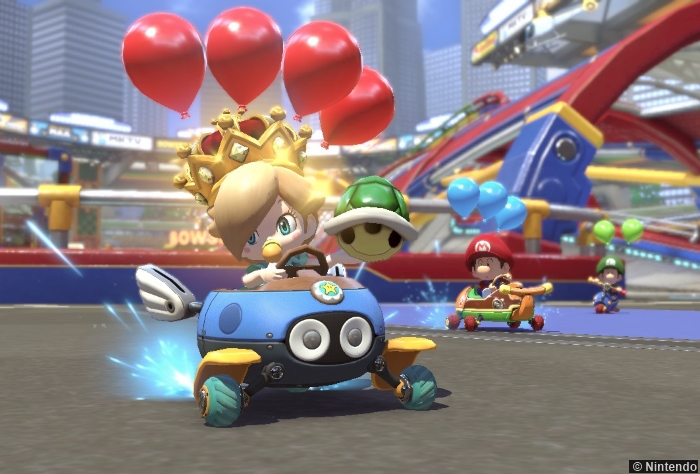 Yes it’s basically the same game that was released for the WiiU just a few years ago, and yes if you had a WiiU you almost certainly had Mario Kart 8 (one out of every two WiiU owners had the game) and you almost most certainly maxed out everything there was to do and unlocked everything there was to gain. You’ll still want to buy it on Switch, and not just because of the resolution bump. You’ll want it on Switch because you can now take Mario Kart 8 with you anywhere, and since it’s perhaps the most well-rounded game in the series and now sports a true battle mode (which the original version was sorely lacking), it’s superior in every way…and it was already an amazing game. The only downside is the full $60 price tag for what is essentially a souped-up port of a last-gen game. But you can’t blame Nintendo for being greedy; they know people will buy it (and people are). 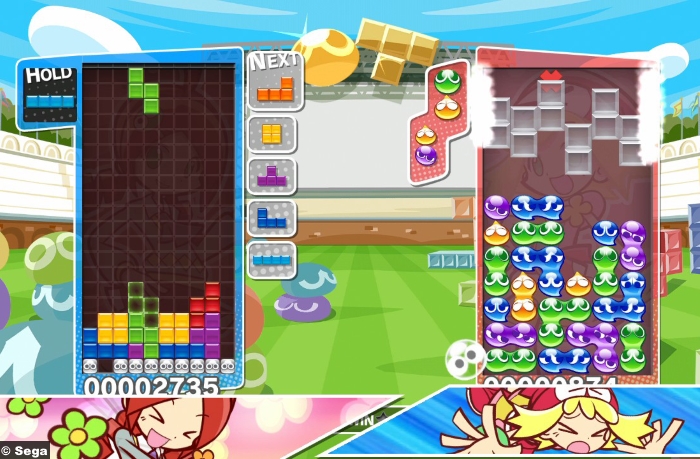 Tetris is my jam. I’ve probably logged more hours playing it than anything. I’ve played it on everything from an IBM, to an NES, a Gameboy, SNES, XBOX 360, XBOX One, Wii and DS, and probably countless others I’ve forgotten. Puyo Puyo is not as well known to me or most westerners. It has a different play style altogether. Whereas Tetris is about slowly chipping away with a steady stream of small-to-medium sized combos, with one big one every now and then, Puyo Puyo is about slowly putting pieces in place to string together one monster combo. It requires a different mindset and a different skillset to master, and yet Sega has brought them together and proven they can co-exist like peanut butter and chocolate. If you try Puyo Puyo and it’s not your thing, have no fear you can always enjoy Tetris in all its intended glory. There’s no downsides to this purchase if you’re a fan of either game. Bright and clean animations, some crazy avatars to choose from, a fine soundtrack and a reduced ($40) price make it an easy purchase for fans. 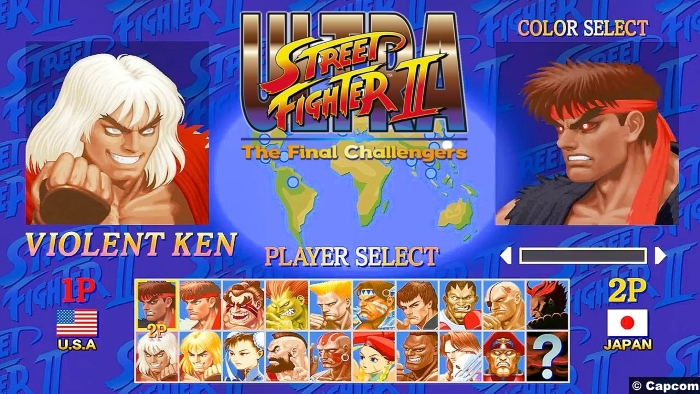 Do you like Street Fighter 2? Would you like to play it on the Switch with the option to do so with HD graphics? Are you okay paying $40 for what was a $15 dollar game on the Xbox 360? If you answered “yes” to those questions, this game is for you. If you answer “no” to any of them, better steer clear. Yes, this is a money grab. There is precious little here that is worthy of the staggering markup in price compared to other versions of the twenty-six year old game. But if you want what has to be the definitive version of the game, and if you want it on the go, and you don’t mind dropping $40 on it, by all means grab it. It’s not like the game is glitchy or missing key features. It’s a phenomenal product; it’s just terribly over-priced.

8/10 – If you have the cash to burn and love fighting games, by all means. 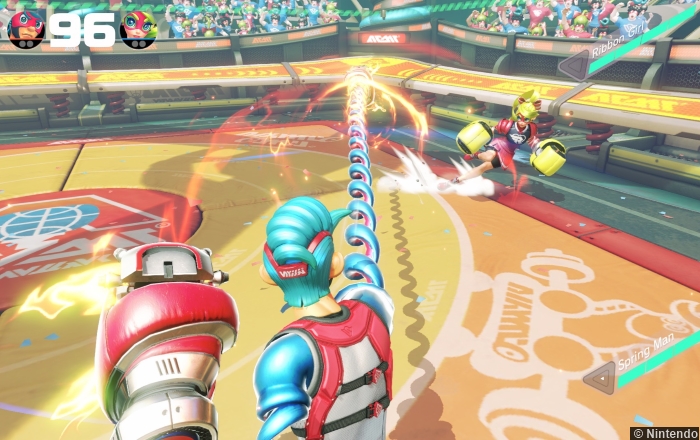 Imagine if Nintendo’s own Punch-Out had a baby with Splatoon. ARMS (all caps!) is the Big-N’s first new IP for the Nintendo Switch and the company hopes to catch lighting in a bottle the way they did with Splatoon a few years ago on WiiU. As a pure fighting game, it offers some pretty nuanced gameplay that—in true Nintendo fashion—is quickly learned but slowly mastered. On the other hand, there are some things that more traditional fighting game fans may balk at (the small roster size chief among them). The single player experience is a little lacking too, although that’s a pretty universal problem with fighting games. What you want when you pick up a game like this is to be able to sit down with a friend (either in the same room or across the planet via the internet) and have a fun time beating each other senseless. In that sense, ARMS packs all of Nintendo’s patented quirky charms, but you may find yourself a little bored with the repititon (which is where the small roster size really hurts it). At the end of the day it feels like a a good first step which should be greatly improved in the inevitable sequel.

8/10 – It needs more more more, but what we have is still pretty good. Fighting game purists may have quibbles, but die-hard Nintendo fans will probably be happy with the purchase. Others may want to try before they buy. 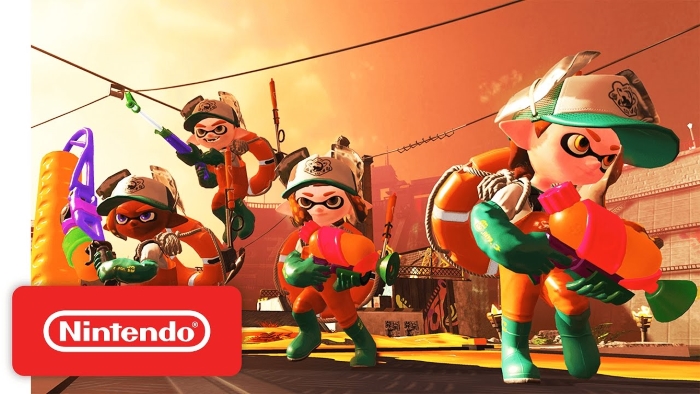 When the original was reviewed on this site two years ago, we mentioned some pros and cons that made the game worthy of purchasing while also worthy of criticism. The flaws mentioned the severely limited offline experience, the lack of proper communication between online teammates, and the exorbitant amount of text one has to scroll through to get to what you want (a game to play, an item to buy, etc). Splatoon 2 offers no help to those who hated scrolling through endless paragraphs of text. Splatoon 2 offers moderate help to those who want voice chat (although you have to go through an obnoxious Switch-to-Phone-to-headset set-up). Splatoon 2 offers a night-and-day improvement on the offline experience, offering a solo campaign that is a blast to play. Despite all the flaws present in the original outing, the game still earned a 9/10. How could the sequel—which offers no new cons, and many new positives—get any less?

9/10 – A few little annoyances are still present (including no gyro+stick aiming the way you can on Breath of the Wild, and that convoluted voice chat setup), but the overall product is just as delightful and addictive as the original. 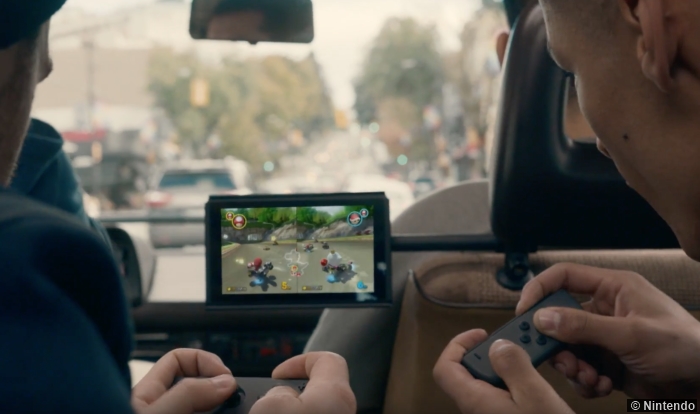 There are a handful of Indie releases to look into as well, if you want cheaper, less time-consuming gaming experience…

SNAKE PASS is a divisive game, but as long as you go into it knowing it’s a slow-moving puzzle game that just happens to look like a 3D platformer, you’ll be fine. Don’t buy the game expecting Banjo Kazooie. Buy it expecting a light, mildly-addictive gaming experience that, depending on your tastes, might be worth the asking price of $20 (8/10).

WONDER BOY was an old Sega property, originally for Arcade and eventually the Genesis/Mega Drive. It sat dormant throughout the Saturn and Dreamcast years and basically disappeared from everyone’s mind until it last year when the original game was remade and released as a digital-only title on the PS4. Now the third game has been remade and released on PS4, Xbox One and Switch. The three versions look almost identical but the Switch offers that extra portable feature, so if you’re looking for old school 2D platforming nostalgia on the go, it’s a fun, albeit short, game to pick up, and worth the $20 price point (8/10).

SHANTAE: HALF-GENIE HERO is the next in a series of platform games that began in 2002 on the Gameboy Color. A sequel found its way on the Nintendo DS in 2009 and likewise received strong reviews. Five years later, the WiiU e-shop received the third game in the series, and it too was critically acclaimed. Despite its loyal fanbase and supporters in the media, the series has stayed under the radar due to it mostly being digitally-released. That’s also the case with the Switch’s Shantae: Half-Genie Hero, but don’t let its lack of physical release keep you from trying out one of the best 2D platformers today. As with many indie-titles, the game is short, but what it does offer is quite enjoyable, especially for only $20 (9/10).

GRACEFUL EXPLOSION MACHINE scratches that Gradius/Defender itch for fans of 2D SHMUPS (shoot-em-ups). Looking at the list of available worlds and levels to play is pointless here. Yes, the list is short, but true SHMUP fans know the real game is in the scoreboard. Going back over a level time and again to get a higher and higher ranking is the video game equivalent of being a gambling addict. It’s a divisive game; you have to be a fan of this genre, but if you are it’s well worth the meager asking price of $13 (9/10). 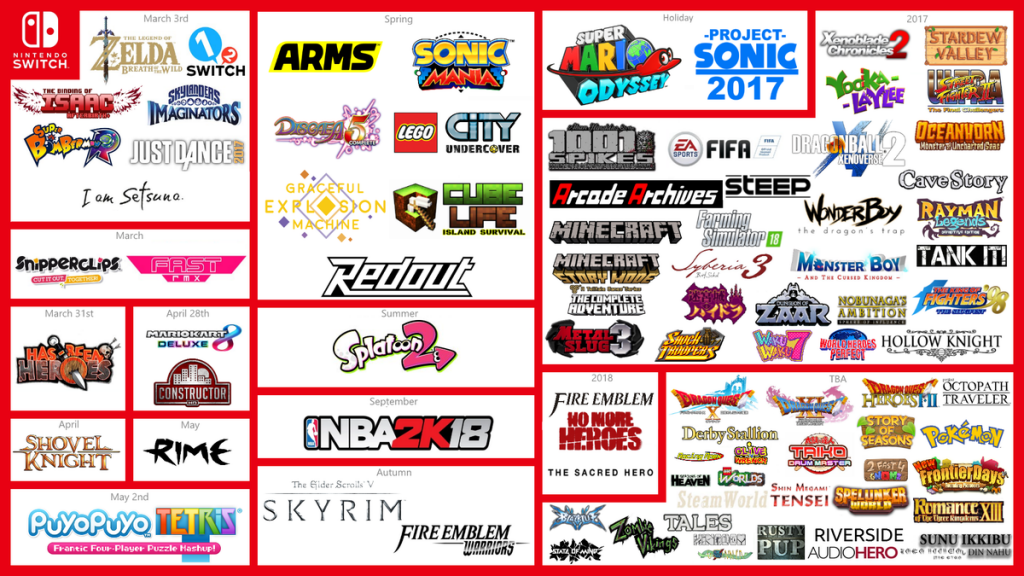 It wasn’t too long ago that Nintendo fans were dying in a desert begging for the rain to come and bring them a game, any game. Today, the Switch is issuing a fountain of fun, addictive, light-hearted and hardcore titles. The system launched with one of the best games of all time, along with a deceptively great opening salvo. Spring was great, the summer has been too.

Here’s to the Fall.