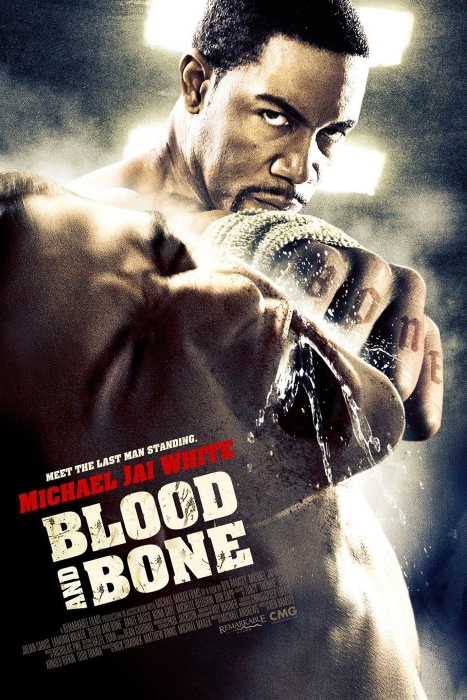 When ex-con Isaiah Bone (Jai White) gets out of prison, he immediately seeks out a room to rent and gets involved in LA’s underground fight scene. Along the way, he destroys the area’s best fighter, who is under the control of local mob boss, James (Eammon Walker). When Bone refuses James’ request to fight on the international circuit, it sets off a powerful battle between the two, amidst some surprising revelations about what drove Bone to get involved with James in the first place.

The above synopsis should be familiar with anyone who has seen A.W.O.L. (also released under the names Wrong Bet and Lionheart), the Jean Claude Van Damme movie released in 1991. Respectable guy, who just so happens to be a great fighter, gets caught up in the underground fighting circuit, battling an array of guys until finally getting the one-on-one contest against the unstoppable killer (in the case of A.W.O.L., Atilla, played rather convincingly and charismatically by Abdel Qissi). This movie’s top dog is a guy called Price, played by legitimate 5-time world champion in martial arts and co-creator of Extreme Martial Arts (XMA), a combat sport combining martial arts and gymnastics, Matt Mullins… and yes, he is every bit as good as his resume reads.

Truth be told, it’s a genre unto itself and has managed to endure for decades with pretty much the same plot (noble guy fights for a good cause, the fights are controlled by a crook and the last guy they face is an undefeatable monster who has a habit of seriously injuring or killing his opponents). My personal favourite in this genre is Best of the Best 2 (I don’t count the first BotB, mainly because the fighting tournament was legit, even though Dae Han does fall into the undefeatable category), but because the synopsis of these films is quite generic, it’s up to the writers, actors, director and fight choreographer to make their version of events stand out from all the rest. In that respect, this movie nails it dead on.

The movie opens with pre-credits scene showing a gang of prisoners, led by the genuinely scary Kimbo Slice (with genuinely scary bushy beard), heading to the prison shower room to take out our hero (after paying off an unseen guard). Now, unless you haven’t seen a movie before in your life, you don’t need me to tell you that the eight-strong team of hardened cons aren’t successful, otherwise we’d have a short movie on our hands. This opening scene is designed specifically to get across exactly how great a fighter Isaiah Bone, and, by extension, Michael Jai White (The Dark Knight and the title character in Spawn, a personal favourite of mine) is. In that regard, it’s mission accomplished because Bone is a bad-ass of the highest order (“You got til the count of five” being just as menacing as old Clint telling folks to vacate his lawn), taking out all eight would-be assassins in less than twenty seconds. It’s a pulsating opening that sets the tone for the rest of the movie.

The fight scenes are brutal and realistic (under the watchful eye Fernando Chien) and most of the characters are more well rounded than this type of film normally gets, despite some of them being stereotypes. The non-fighting dramatic “story forwarding” scenes, which normally drag a film like this down, also shine more than they have any right to.

The main cast are great in their respective roles, with Jai White (bad-ass to the, ahem, bone), Julian Sands (an actor who deserves to star in better movies than he has in the past), Eamonn Walker (who plays his part with villainous relish) and Dante Basco (who gets most of the best lines) all excelling. The real-world fighters all, unsurprisingly, look the part in what are essentially cameo roles (Bob Sapp comes across as one of the most legitimately terrifying looking men on the planet, while Gina Carano is disturbingly hot when she’s pounding the crap out of a hapless female opponent) and Nona Gaye handling the love-interest part with aplomb and dignity.

The director avoids unnecessary camera cuts during the fights, making them much easier to follow than a lot of other movies in the genre and he deserves a lot of credit for resisting the urge that’s plagued so many other film-makers. Some well chosen POV shots also add a lot to the fights, really bringing home the blows as they rain down and, in a twist I personally haven’t seen before, giving us an indication of how Bone can overcome the fighters he goes against by letting us see what he sees when his opponents are warming up (e.g. what their offence consists of, how they drop an arm, etc). It really adds an interesting perspective and really impressed me.

Whether you enjoy this movie or not is going to depend on whether you enjoy the genre as a whole. If you don’t, you may still get something from it, but if you do enjoy fighting movies, then this is one of the best examples in recent memory.

The extras cover the basic elements you’d expect with a movie on DVD; a trailer, a “making of” doc (that runs 15mins) and a commentary track. All three are decent enough and are worth sitting through. The discussions during the fight scenes are generally quite interesting and let you in on what went on as they were filmed. You can tell that these guys all get along and had a blast doing the commentary.

This is an absolutely brilliant example of the underground fighting genre, with some blistering fight scenes (the battles at Tattoo’s being my personal favourite) and good-to-great acting from pretty much everyone involved. The director, Ben Ramsey, excels in only his second movie at the helm (even the obligatory montage sequence showing Bone climbing the ranks, training, etc, come across as fresh where, under other directors, they’ve seemed stale) and I, for one, look forward to seeing what he can come up with in the future.

Michael Jai White seems to be having a renaissance in his career over the last few years and it’s great to see him in a role that shows both his action and acting chops. Dante Basco should be one to watch out for in the coming years, as he has a charisma that cannot be taught in any acting school and is a brilliant contrast to the more serious and gravelly-voiced White.

When I was asked to review this film, I had little expectations when I placed it in the DVD player. A director with only one other credit and seemingly sold to me on the strength of the fighters featured in cameo roles, but it actually stunned me with how impressive every aspect of the film is. The writing, the production values, the script, the direction, the subtle use of the fighter cameos, a great soundtrack and the intelligent use of camera angles (which was helped immensely by having real fighters in the required roles) were all much better than I anticipated.

Blood and Bone deserves a much bigger audience that I fear it’s going to get, but hopefully word-of-mouth will help it become a cult classic. I genuinely can’t recommend it enough, especially for the last third. Ramsey throws us a curveball that brings a whole new element to proceedings and the last battles are a joy to behold. As a last little gift, a final scene during the credits sees one character get his just desserts.