Last time on Smackdown’s SO OF COURSE, the Tuesday Night crowd held the Backlash PPV.

After a month over in the wasteland of Raw, we’re back with Smackdown where THINGS actually HAPPEN. Tuesday Night craycray is set to host this year’s annual Money in the Bank show. The blue show gets exclusive rights to the popular match this year because over on Raw Roman Reigns is already holding a golden briefcase in a proverbial way, no need to give him an actual one too.

Unlike Raw’s previous PPV, which offered no fresh matchups or interesting storyline advancements or conclusions, this Smackdown show is LOADED with notable happenings. Apart from the big ladder match that is jam-packed with superstars, any one of whom could win it except Dolph Ziggler, there’s also the women’s MITB match (for the first time ever) as well as New Day’s Smackdown debut in a match for the tag titles. Lana will make her PPV debut as well, and the WWE Title will be defended by new champion Jinder No It Wasn’t A Joke Yes Vince Whored Out His Most Important Title To A Jobber Just To Entice The Indian Market Mahal.

This show is stacked. I can’t wait to see how Vince will screw it up.

Let’s break it down. 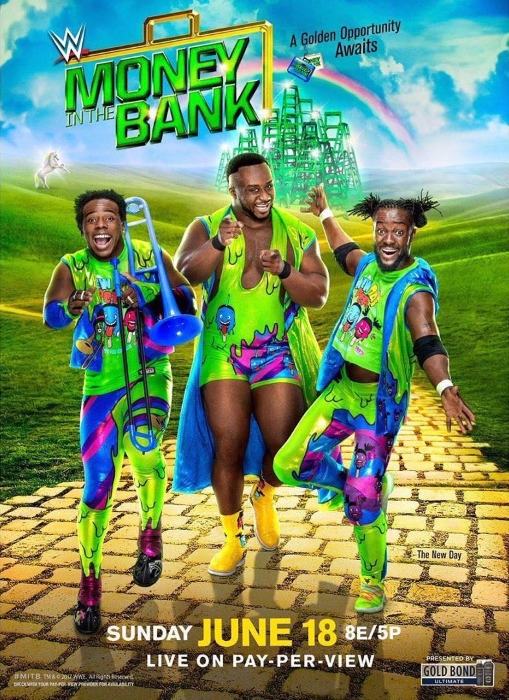 Unlike in the men’s match, the women’s contest is lacking in the “top-to-bottom great” category. The smaller division means only five competitors, and one of them is Tamina, who needs no part in a match as dangerous as this. She can barely be trusted to work a five minute throwaway TV match without hurting herself or someone else; tossing her out there in a match like this is dangerous. On the other hand, having only five people to keep up with (one of whom being Tamina who will hopefully be game-planned out of harms way for most of the affair) means the action should be more intense. You’d think it’d be the opposite, that more people means less chance for downtime, but actually the ladder matches with two-to-five contestants are usually better than the ones with six-to-eight people. Having too many leads to people laying out on the sideline, waiting for their cue, which makes the whole affair feel too choreographed. The fewer you have, the better the matches are usually laid out, which means a better flow to the action and thus less downtime. I expect a fast and furious ten minute affair that leads to a fun conclusion. A few of these women can carry the match and make it live up to its history-making nature.

It’s hard also to see either Natalya or Tamina getting the win. Also, though Charlotte and Becky are the easy-picks, those also seem too safe, with neither woman really needing the win as well. Carmella is the bet, as she has the personality to add the briefcase to her heel persona, seamlessly. Weeks of Ellsworth carrying it around for her is too-easy a picture to imagine for it not to happen.

THE USOS vs NEW DAY

The New Day needed to come to Smackdown more than anyone else on Raw (and really, they all need to come to Smackdown for one reason or another). Their once-fresh and hilarious run had started to become stale and tiresome, and they were beginning to lose their magnetic hold over the audience. Having to stand in the middle of the ring for thirty minutes, cutting the same jokes over and over will wear down anyone. Moving to the shorter/faster-paced Smackdown has allowed them to tighten up their humor and embrace the wild west mentality that Tuesday night affords them. Case in glorious point:

Meanwhile their opponent, the Usos, are in the middle of a career renaissance. And if you don’t think they’ve been around long enough to have a career renaissance, consider that they’ve been on WWE TV for seven years now, and they’ve only just now figured it all out. They have an edge, a style, a passion in their work that has never been present before. They’re a new team and deserve the push they’re getting. I don’t think New Day needs to win, nor do I think they should win. Smackdown doesn’t need to be desperate and put their titles on the longest-reigning tag champs ever, because the belt isn’t hurting for credibility at the moment: The Usos are doing just fine. Better to keep their reign going and build to maybe a SummerSlam (or the Smackdown PPV that follows) title change. Also please keep Fashion Files coming.

I’m predicting this match will happen right in the middle because the finish is obvious and the two Money in the Bank matches (A) need to be spread apart from each other, and (B) are much more interesting match-ups, especially in terms of who will win (doubly-especially when it comes to the men’s match). So spreading out the three big matches by having the lesser matches in-between is good card arrangement.

As for the match, it is what it is: a straight-rematch. They didn’t even bother adding a stipulation to it, probably because it doesn’t need it: The match is a formality to get Orton out of the picture and Jinder is getting enough heat that he doesn’t need a gimmick match to prop up his title defenses. There is the added ingredient of the PPV happening in Orton’s hometown of St. Louis, but that won’t affect anything more than the pop when he hits an RKO.

Expect largely the same match as last time, and largely the same finish too. Jinder will then move on to someone new for Battleground at the end of July and Orton will slide down into a feud with someone away from the title picture (Baron Corbin maybe?).

The Lana experiment finally takes its next step forward. Remember that she has been training for years to be a real—wrestling—competitor, not just a manager. She had a match at WrestleMania(‘s preshow) a couple years ago, in what everyone thought was her coming out party. Instead she slipped back into the role of valet and manager and hasn’t sniffed a television wrestling match since. Now she’s finally debuted on Smackdown, and not only is she getting a match, she’s getting a PPV match, and it’s not just any PPV match, but a title match.

It feels like what happened with Jinder Mahal, except he was even more of an unlikely challenger and champion. With Lana, at least it’s well known that Vince is sky high on her and wants her to be one of the centerpieces of the women’s division. Might he pull a classic Vince McMahon and skip straight to the end, and just give her the title before she’s ready? Yeeeeeep. Will he? It’s Vince McMahon; the whole point of this column is that no one can honestly predict what he’s going to do.

Naomi has been a good champion, but she’s never going to be more than a placeholder. This match is all about Lana. Right now the crowd seems into her, but they will turn on her in a heartbeat if her skills aren’t up to par. That said, if Carmella wins the briefcase, it’s hard to imagine the women’s title feud being carried by those two as we inch closer to SummerSlam. Both of them are the kinds of talents that need more veteran experience on the other side of the ring. But this is Smackdown and if anyone is going to do something crazy, it’s Smackdown.

There have been bad winners in the history of Money in the Bank, but you’ll be hard-pressed to find a match that didn’t entertain. The contest is 12-15 minutes of mayhem, inter-connected storylines and breathtaking stunts. Not to mention the stakes: There’s a reason the match was spun off onto its own PPV, which quickly supplanted Survivor Series in fans’ minds as a “big four” PPV event. The mostly-consistent streak of briefcase winners going on to win the title, combined with the mostly-consistent streak of briefcase winners being fresh or otherwise surprising picks, has made for a match that has fans riveted from beginning to end. It doesn’t have the pedigree of, say, the Royal Rumble match, but it’s like the Rumble’s rapid-paced little brother. Like the Rumble, it’s worth watching even if you haven’t been following wrestling lately.

This year’s event is arguably the most star-studded in its thirteen year history. Also, other than Dolph Ziggler, who is only there because (A) Smackdown has a small roster, and (B) no one looks better these days eating a crazy bump than Dolph Ziggler, every man in the match has a legitimate argument as to why he should be the winner:

SHINSUKE NAKAMURA: He should win because he only has a few years left in the tank and the iron is getting cooler every day; strike now.

SAMI ZAYN: He should win because he’s the prototypical guy to win MITB. He’s the midcarder that fans love that the company might want to push a little to see if he can be a top-carder. He’s Edge, Rob Van Dam, CM Punk, Daniel Bryan, etc.

AJ STYLES: He should win because he’s the MVP of the show and the show should revolve around the MVP. When he’s not in the title picture the MVP should be prominantly featured with a major storyline or angle, to keep the fans invested in him until he reclaims his throne.

Other than Dolph, whose time has passed and who now is just an able veteran hand, everyone has a good argument to make, but the most reasonable winner is BARON CORBIN. He should win because it would be an obvious stepping-stone on his upward ascent. Unlike the others, Corbin isn’t an indie darling or an easy character for fans to invest in. He was just starting to find a groove on NXT when they moved him to the main roster, gave him the Andre trophy at WrestleMania and then forgot he worked for them (Vince has a bad habit about forgetting who works for him). After toiling away and losing all his momentum, he has found a second home on Smackdown and is now right back where he was when he first moved up to the big leagues; on the cusp of a real main-event run. Winning MITB is the perfect way to say “It’s time to start paying attention to this guy.” And even though he’s a heel and Jinder is too, that’s not a big deal. That just means Corbin can carry around the briefcase for a while. We’ve had too many too-soon cash-ins lately. It would be nice to let him carry around a reminder that he’s a “next world champion.”

Let’s be real, you know Cena is going to get title #16 at some point. Let Corbin ruin his confetti party and get a real rub and main-event run.