Straight to the Top: Money in the Bank WWE DVD Review 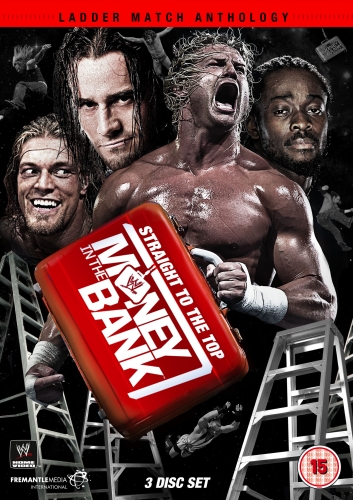 Even though the concept of the Ladder Match is not an original WWE idea (most attribute it to Stu Hart’s Stampede Wrestling promotion in Canada in the 70s), it’s hard to argue that it was Vince McMahon at WrestleMania X that brought the stipulation to the masses – even though WWE themselves had a Ladder Match two years prior between HBK and Bret Hart.

As with most things in wrestling, evolution of a concept is inevitable. From the humble Ladder Match, we progressed through Tag Team Ladder Matches and ended up with the amazingly brutal TLC matches that are exemplified by the long rivalry between Edge & Christian, The Hardys and The Dudleys. But this was not enough.

The Cage Match evolved into Hell in a Cell and Elimination Chamber. Going back further, the Battle Royal morphed into The Royal Rumble and eventually (via the mind of Chris Jericho), the Ladder Match concept was upgraded when the Money in the Bank match was unveiled at WrestleMania 21.

One thing was for sure; with at least one Mr. Money in the Bank stalking champions, the WWE landscape would never… e-e-e-e-e-ver, be the same… again.

WWE, as mentioned above, have a history of taking existing concepts and tarting them up to create new and unique match types. Some are epic creations and last the test of time (Hell in a Cell, TLC, Royal Rumble and Elimination Chamber all spring to mind), while others that might have looked good on paper are utter tripe in reality (I’m looking at you, Kennel From Hell Match).

With that in mind, when Chris Jericho first raised the idea of taking the Ladder Match contest (which had been fought as one-on-one, two-on-two and three-way tag-team matches over the course of the previous ten years) and having a six-man, everyone for themselves, free-for-all, Vince could only have seen money coming his way, no pun intended. With the provision of a guaranteed title shot for the winner added to the mix, excitement was most definitely in the air.

From those “humble” beginnings through numerous winners, new champions, two matches per show and Money in the Bank becoming its own PPV event, the MitB Ladder Match has never failed to excite, never failed to innovate and never failed to leave us wanting more.

Due to the legacy of a concept, which is only 8yrs-old lest you forget, WWE has put together this anthology covering every single MitB match from WrestleMania 21’s debut to the most recent PPV in June 2013.

Hosted by The Miz (who isn’t too unbearable), there are 14 complete matches across the three discs and it’s interesting to see the evolution of both the match and the (what became) standard sports over the years.

From Kane’s entrance setting the ladders on the stage on fire at WrestleMania 21, to Shelton Benjamin being the MVP of the bout itself (an accolade he would take more than once before the torch was passed to Kofi Kingston), the first match was a revelation and a stunning way to open the biggest show of the year. It didn’t hurt that the fans were lapping up every single second of the action. This would continue for every single match on the set.

Unusually for a collection of this nature, I didn’t get burnout as I have previously with things like the Royal Rumble collection, the two Ladder Match releases or the >INSERT NAME< Greatest Matches sets. Normally because it’s generally the same thing over and over again, the viewer can get tired of the concept, but with the varying wrestlers and the genuine evolution over the years, this release successfully avoids that fate.

Another plus in the MitB’s favour is that it features wrestlers not normally associated with “spot-fest” bouts. Wrestlers like Kane, Finlay, Lashley, Cena , Mark Henry, Hornswoggle (and his mini-ladder), Big Show (and his giant ladder) and Sheamus all feature across the three discs and all three (out of their comfort zone) provide their own unique MitB moments.

Likewise, the match also allows mid-card wrestlers the chance to shine, with guys like Kofi Kingston, Evan Bourne, Shelton Benjamin and many others all hitting amazing spots that popped the crowd over and over again.

The move to an actual Money in the Bank PPV was, and still is, a mistake in my book. Having two matches dilutes the importance (as does having two titles, but that’s another story for another time) and moving it from WrestleMania not only robbed the biggest PPV of the year of a unique and exciting contest, it also makes the MitB itself seem less special.

Winners get to cash in at any point over the entire year. Winning at WrestleMania gives that wrestler his own “moment”, it also gives the concept meaning as you are winning a title shot on the biggest stage and can hold it until the next ‘Mania. It still saddens me that no-one actually did cash-in at WrestleMania. The surprise cash-in lost it’s lustre (although we all still pop when it happens – look at Dolph Ziggler this year), but to have someone cash in after the main-event of WrestleMania had ended would have been the logical conclusion to that scenario.

The concept of Money in the Bank is genius in its simplicity and this set is a perfect chronological history lesson through each and every bout.

The matches themselves are all great, but the set could have been improved by implementing a few things -:

The first few matches are in a 4:3 aspect ratio and it’s a little distracting when you’re used to widescreen images. From WrestleMania XXIV on though, that ceases to be an issue. Another issue is the removal of commentary whenever Benoit was involved in the first match. Of course, I understand why they have done it, but it disjoints the bout somewhat.

Going forward, there are some things I think could be introduced to evolve the concept even more. My own personal idea would be that whenever a MitB case is cashed in, that case is automatically fought for on whatever the next televised event is. This could be RAW, Smackdown or a PPV.

This could add some unpredictability to the calendar year and also create storylines whereby other wrestlers pressurise the current holder to cash-in so that they can have a chance of getting the case for himself. It would also be a bonus for the fans as, for example, you’ve bought a ticket for the RAW show in your area and now, all of a sudden, you have a Money in the Bank match coming to your town… and you’re going to see it LIVE.

Another idea would be to scrap the current WWE and World Championship matches and to instead have one for the male wrestlers and one for the female wrestlers. The former would again bring some unpredictability to things as we would not know who they are going to cash-in against, while the latter is something new to try… as is cashing it in for a shot at, say, the WWE Tag Team Championships.

Finally, you could have an angle where the holder does not cash in and suddenly time is beginning to run out for him to do so. This would then switch the pressure to the man with the case and, if nothing else, would be something different to what we have become accustomed to.

Incidentally, there are no Blu-Ray extras on this release.