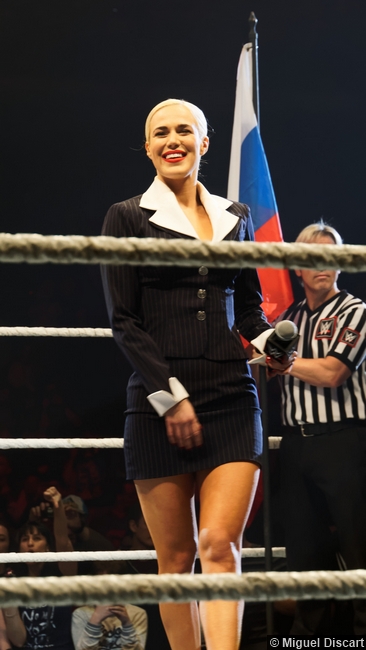 The champion is then interrupted by a debut weeks in the making as, after weeks of vignettes promoting her arrival to SmackDown LIVE, Lana would make her SmackDown LIVE debut as “The Ravishing Russian” makes her way to the ring! Shane tells Lana that this is the land of opportunity, but now is not the right time with Lana saying that, what works for her she will make work for Shane. Lana then says that, while Naomi cannot compete in the Women’s Money-in-the-Bank Ladder Match, she can compete in it.

The other women in the ring laugh at Lana before Naomi scoffs at Lana, saying that Lana hasn’t even had a singles match in her career, asking who Lana has ever beat. Lana is quick to fire back, saying that she can beat Naomi. This leads to an argument between Naomi and Lana that has to be broken up by Shane McMahon, who tells Lana that she has to “earn” a SmackDown Women’s Title match, which frustrates “The Ravishing Russian” as she utters something in Russian before storming out of the ring. The Commissioner then says that what it is time for is a 6-Woman Tag Match, which will take place right now.

In a rematch from Backlash, the opening match of the night would see the five participants in the Women’s Money-in-the-Bank Ladder Match in action as SmackDown Women’s Champion Naomi would team up with Charlotte Flair and Becky Lynch to face Natalya, Tamina, & Carmella, with James Ellsworth in their corner, in a 6-Woman Tag match. During the match, Lana would come out to ringside and, with the referee’s back turned, Lana would trip Naomi on the ring apron and this would give Tamina the opening to strike with a super kick, pinning the SmackDown Women’s Champion to pick up the win for her team as Lana applauds.

In a rematch from last week, two of the six participants in the Men’s Money-in-the-Bank Ladder Match would square off on SmackDown LIVE as “The Phenomenal” AJ Styles would go one-on-one with “The Show Off” Dolph Ziggler. Despite Dolph Ziggler’s repeated attempts to cheat to win the match, AJ Styles would persevere, planting Dolph with the Styles Clash and pinning Ziggler for the win, avenging his loss from last week and picking up some momentum heading into WWE Money-in-the-Bank.

As he prepares to defend the WWE Championship against Randy Orton a week from Sunday at WWE Money-in-the-Bank, WWE Champion Jinder Mahal, with The Singh Brothers in his corner, would go one-on-one with and old rival in Mojo Rawley in a non-title match and, if Mojo wins, he gets a spot in the Men’s Money-in-the-Bank Ladder Match. During the match, Jinder Mahal would rake the eyes of Mojo Rawley, sending Mojo into the ring post before hitting the Khallas and pinning Rawley for the win.

Before they challenge The Usos for the SmackDown Tag Team Titles at WWE Money-in-the-Bank, The New Day would make their in-ring debut on SmackDown LIVE as Big E & Xavier Woods, with Kofi Kingston in their corner, would face The Colons. In the end, it was Big E & Xavier Woods hitting Primo with the Midnight Hour with Xavier pinning Primo to pick up the win for The New Day. After the match, SmackDown Tag Team Champions The Usos would come out to the stage, saying they got the tag team division on “lock” before making jokes at the expense of The New Day, concluding by saying that it’s not “paranoia”, it’s The Usos.

Backstage, an interview with Sami Zayn is interrupted by Baron Corbin, who cheapshots Sami before hitting Zayn with a ladder and tossing Sami into a couple of ladders placed nearby before leaving the scene.

Backstage, Shane McMahon is on the phone when the Commissioner is interrupted by SmackDown Women’s Champion Naomi, who expresses how much she wants to face Lana at WWE Money-in-the-Bank, saying that she will even put the title on the line! Shane then decides to make the match official as Lana will challenge Naomi for the SmackDown Women’s Title at WWE Money-in-the-Bank.

Then it was time for the main event as, with Baron Corbin a guest on commentary, two of Corbin’s fellow Money-in-the-Bank Ladder Match participants would square off on SmackDown LIVE as “The Artist Known As” Shinsuke Nakamura would go one-on-one with United States Champion Kevin Owens in a non-title match. In the end, it was Shinsuke Nakamura hitting Kevin Owens with the Kinshasa, pinning the United States Champion for the win. After the match, Shinsuke Nakamura’s celebration would be cut short by Baron Corbin as “The Lone Wolf” enters the ring, grabbing Nakamura and planting Nakamura with the End of Days! Corbin then leaves the ring, having delivered a strong message to the other Money-in-the-Bank Ladder Matches that he is a force to be reckon with.