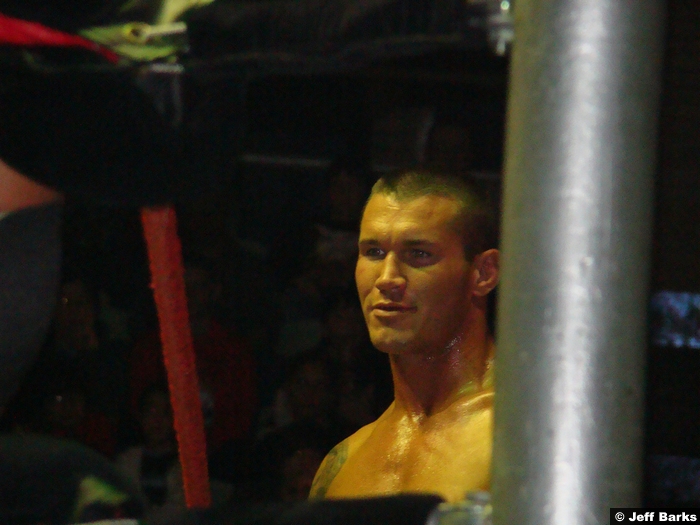 After his attack on WWE World Champion AJ Styles last week cost Dean Ambrose his shot at becoming the #1 Contender, SmackDown LIVE kicks off with James Ellsworth. A sorrowful Ellsworth thanks SmackDown Commissioner Shane McMahon and SmackDown General Manager Daniel Bryan to give him the opportunity to come out there and say “goodbye”! Ellsworth then says that he cannot move on with his life until he can tell Dean Ambrose that he’s “sorry” to his face before Ellsworth asks Dean Ambrose to come out to the ring. Ambrose makes his way to the ring, saying that he’s had a lot of time to think about it and he just can’t stay mad at him. Ambrose then says that he’s the one that brought Ellsworth to ringside last week so James doesn’t owe him an apology. Ellsworth says that Ambrose helped him get two victories over AJ Styles and he repaid him by costing Ambrose a shot at the WWE World Title, saying that “any man with two hands can make a mistake”. Ambrose responds by telling James Ellsworth to “never” get in his way again, but Ellsworth insists on apologizing, telling Ambrose that he’s “sorry”.

This brings out WWE World Champion AJ Styles, who asks James Ellsworth why he’s apologizing to Dean Ambrose. Now in the ring, the champion tells Ellsworth that Ambrose has been “using” him, saying that he was going to “take it easy” on Ellsworth in their title match a couple of weeks ago, but Ambrose kept egging him on to hit Ellsworth harder. Styles then says that Ellsworth owes him his “entire career” before Ambrose gets in AJ’s face saying that, unlike the champion, Ellsworth doesn’t do things the “easy way”. Ellsworth then gets in between Styles and Ambrose, but the champion shoves Ellsworth into “The Lunatic Fringe”, providing an opening for AJ to catch Ambrose with the Pele Kick! Styles then tosses Ellsworth out of the ring before sizing Ambrose and blasting “The Lunatic Fringe” with the Phenomenal Forearm, leaving Ambrose laid out in the ring.

Backstage, SmackDown General Manager Daniel Bryan confronts Dean Ambrose and James Ellsworth with Ellsworth nearly in tears over what just transpired in the ring. However, the GM takes pity on Ambrose and Ellsworth, giving “The Lunatic Fringe” another shot at becoming the #1 Contender for the WWE World Championship when he faces AJ Styles in a rematch later tonight! Daniel adds that this will be Ambrose’s last chance to become the #1 Contender and, after Ambrose exits, the GM tells James Ellsworth that he can feel free to hang out backstage, but under no circumstances is he allowed to go out to ringside.

After his shocking actions last week where he surprised everyone by hitting Kane with the RKO, costing Kane a No Disqualification match against Bray Wyatt before offering the explanation, “if you can’t beat ‘em, join ‘em”, SmackDown LIVE would see “The Viper” Randy Orton go one-on-one with “The Big Red Machine” Kane in a No Disqualification match. As soon as the match begins, Randy Orton brings Kane to the outside, grabbing a steel chair, but it’s Kane who gets to use the chair, delivering a shot to the mid-section and back of “The Viper”. Back in the ring, Kane was ready to deliver a chokeslam to Randy Orton but that is when Bray Wyatt & Luke Harper would appear at ringside. Wyatt & Harper would pull Kane out of the ring, but Kane would knock them both down.

Kane would then set his sights back on Randy Orton in the ring, but Bray and Harper would get involved again as Kane catches Harper with a big boot. Kane would then get ready to chokeslam Bray Wyatt, but Orton saves Bray, hitting Kane with the RKO, pinning “The Big Red Machine” for the win. After the match, Randy Orton and Luke Harper would stare at each other before Harper hits Kane with the Discus Clothesline as Orton watches. Luke Harper then picks Kane up for Bray Wyatt, but Orton steps in front of Harper, shoving Kane into the grasp of “The Eater of Worlds” as Wyatt hits Kane with Sister Abigail. Bray then kneels next to Kane as Orton poses in the corner in unity with Wyatt.

After the match, Alexa Bliss says that, now that she and Carmella have defeated Becky Lynch and Nikki Bella again, who are they looking forward to facing at Survivor Series in the Women’s Traditional 5-on-5 Survivor Series Elimination Tag Match against Team RAW. Carmella then mocks Team RAW’s Bayley before calling RAW Women’s Champion Charlotte an “overhyped daddy’s girl”. Carmella then says that there is no women on the RAW roster than can hang with the women of SmackDown LIVE. Carmella then addresses her team captain Nikki Bella, saying that Nikki better “know her role” and let her run Team SmackDown LIVE because they will “dominate” the women of RAW. Doing her best interviewer impersonation, Carmella asks about Alexa’s title match next week. Alexa says that, next week, Becky Lynch’s “fairy tale” run as SmackDown Women’s Champion, saying that she is going to be the “wicked witch” as she is going to get Becky and take her SmackDown Women’s Title too.

The Miz & Maryse would then be in the ring for Miz TV as The Miz would welcome his guest, SmackDown General Manager Daniel Bryan. Before bringing out his guest, The Miz says that he has had a “prickly” history with Daniel Bryan but he’s going to put all of that behind him. The Miz then introduces his guest as SmackDown General Manager Daniel Bryan makes his way to the ring to a thunderous responds from the crowd in Newark. The Miz says that, tonight, he is just a “talk show host” before letting his guest discuss Survivor Series. The GM reveals that there will be two more qualifying matches to decide the final two spots on Team SmackDown LIVE in the Tag Team Traditional 10-on-10 Survivor Series Elimination Tag Match. However, The Miz is more interested in the Men’s Traditional 5-on-5 Survivor Series Elimination Tag Match and Bryan says that he and Shane had a lot to think about it when it came to picking the Superstars for Team SmackDown LIVE.

The GM then reveals that Randy Orton, Baron Corbin, Bray Wyatt, Dean Ambrose, and WWE World Champion AJ Styles will make up Team SmackDown LIVE! Upset over not being a part of Team SmackDown LIVE, The Miz asks Daniel Bryan if this was the GM’s plan all along to come out there and humiliate him in front of everyone and in front of his wife. The Miz then says that he is Team SmackDown LIVE’s “only chance for survival” before calling Bryan “petty and jealous” before saying that SmackDown LIVE is the land of opportunity to anyone “not named The Miz”. The GM admits that they did consider The Miz for a spot on Team SmackDown LIVE but they needed Superstars who “aren’t afraid to fight” and who are willing to fight “anytime”. Daniel then says that The Miz proved last week that he was “afraid to fight”, reminding The Miz that he turned down Dolph Ziggler’s challenge for a rematch for the Intercontinental Title last week.

The GM continues, saying that SmackDown LIVE needs a team of Superstars who are going to fight on “our terms”. However, The Miz argues that Daniel is setting Team SmackDown LIVE up to get beat by Team RAW at Survivor Series before The Miz accuses Daniel of being “scared to fight”. Putting Maryse between himself and Daniel Bryan, The Miz tells the GM that he’s not “good at anything” anymore, telling Daniel to go back to doing what he does best and that’s “moping around John Cena’s house on Total Bellas”! This lights a fire under Daniel Bryan as the GM scares The Miz & Maryse out of the ring by tossing a chair to the side before shouting at The Miz, telling The Miz to run and hide behind the announcer’s table.

Bryan then tells The Miz to leave the “real fighting” to the Superstars before saying that there are a ton of guys in the back who would have jumped at the opportunity to face Dolph Ziggler for the Intercontinental Title last week. The GM continues, telling The Miz to just sit there and “talk” while Dolph Ziggler comes out and defends the Intercontinental Championship in an open challenge right now!

With The Miz a guest on commentary, Intercontinental Champion Dolph Ziggler would then make his way to the ring as Dolph Ziggler would offer an open challenge to anyone in the back to face him with the title on the line. The Superstar who would take “The Show Off” up on his offer was none other than Curt Hawkins, who tells Dolph that, after tonight, Ziggler will have to “face the facts”. However, as soon as the bell rings, Dolph catches Hawkins with a super kick, pinning Hawkins in record time to successfully retain the Intercontinental Title!

Backstage, James Ellsworth confronts Dean Ambrose as Ellsworth actually asks “The Lunatic Fringe” if there is any way he can be at ringside for Ambrose’s match against AJ Styles tonight! Ambrose is quick to give Ellsworth a “no”, saying that he can hang out in the back and do whatever he wants, but Ellsworth has “done enough already”, telling Ellsworth to “take a hike”.

In his dark location in the backstage area, Bray Wyatt is with Randy Orton and Luke Harper as Bray tells Orton that a serpent has always represented “treachery” and even the “devil” himself. Bray then says that, anyone with “credentials” like that, is “welcome” in The Wyatt Family. While this appears to bother Luke Harper, Randy Orton says that he is done “fighting it”, saying that the “darkness” has shown him the “light”. Orton then tells Bray that he is a “god” before flames flicker in Orton’s eyes.

In another Survivor Series Qualifying Match for the Tag Team Traditional 10-on-10 Survivor Series Elimination Tag Match, Attitude Era legends The Headbangers would make a special appearance in their home state of New Jersey to face The Usos with a spot on Team SmackDown LIVE on the line. In the end, it was Jimmy Uso rolling up Mosh, grabbing the kilt for the illegal advantage to pick up the win as The Usos join Heath Slater & Rhyno, The Hype Bros, and American Alpha on Team SmackDown LIVE.

Backstage, James Ellsworth is still pleading with Dean Ambrose to try and be at ringside for the main event. However, Ambrose would not take any chances on Ellsworth getting involved again as “The Lunatic Fringe” kicks Ellsworth out of the building!

Back in the ring, Ambrose would nearly put the champion away before Styles and Ambrose would go back-and-forth with AJ managing to lock in the Calf Crusher, but “The Lunatic Fringe” is able to get to the bottom rope. With security still in pursuit, James Ellsworth would run through the crowd and back to ringside as Ellsworth tries to get in the ring! Security manages to pull Ellsworth out of the ring and this is when AJ Styles had enough of Ellsworth as the champion shoves Ellsworth over the announce table. However, the distraction would end up paying off for Dean Ambrose as Ambrose would counter the Phenomenal Forearm, hitting AJ with Dirty Deeds, pinning the WWE World Champion to become the new #1 Contender for the WWE World Championship! As security drags James Ellsworth away, a smile creeps across the face of Ellsworth as James went to extreme measures to make things right between himself and Dean Ambrose. Ambrose then exits the ring, patting James Ellsworth before letting security handle the job of dragging him out of the arena.