Timeless, NBC’s new time travel show, comes with an impressive pedigree. After all, it was created by Eric Kripke, who also made a little show about two brothers and their family business, and Shawn Ryan, who created The Shield. With all that creative power behind it, you’d expect a genre show like that to be pretty good. 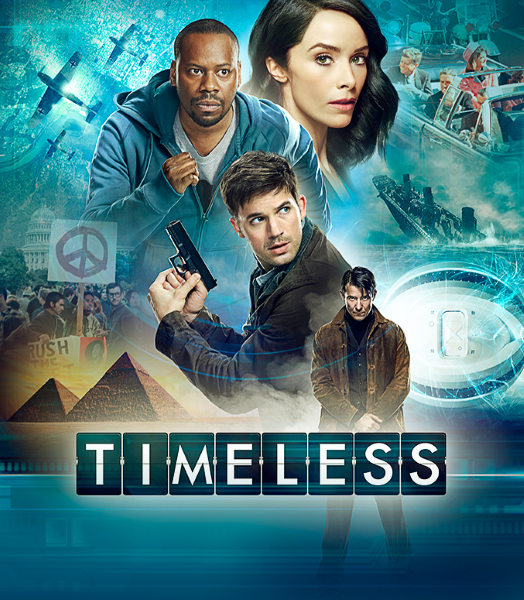 Fortunately, you were right this time. I always knew you were smart. In fact, the show is actually pretty great. But I may be biased, since one of the main characters is a female historian. She’s Lucy Preston (Abigail Spencer), who’s just seen her hopes of tenure dashed when one night, she’s summoned by Homeland Security to the lab of Connor Mason (Paterson Joseph, whose character is obviously modeled on someone like Elon Musk). It seems her country needs her. For time travel reasons. As we’ve previously seen but Lucy had not, baddie Garcia Flynn (Goran Višnjić), an ex-NSA asset, and his men commandeered the fancy new time machine. Now Lucy, along with Master Sergeant Wyatt Logan (Matt Lanter), and Mason lab engineer Rufus Carlin (Malcolm Barrett), need to take the first edition machine back in time and stop him somehow. All three are pretty hesitant about the idea, particularly Rufus, who tells the British Mason, “I don’t know how it works across the pond, but I am black. There is literally no place in American history that’ll be awesome for me.” Mason responds by telling him, rather mysteriously, that he knows why it can be only him (out of all the lab employees) to go with them. 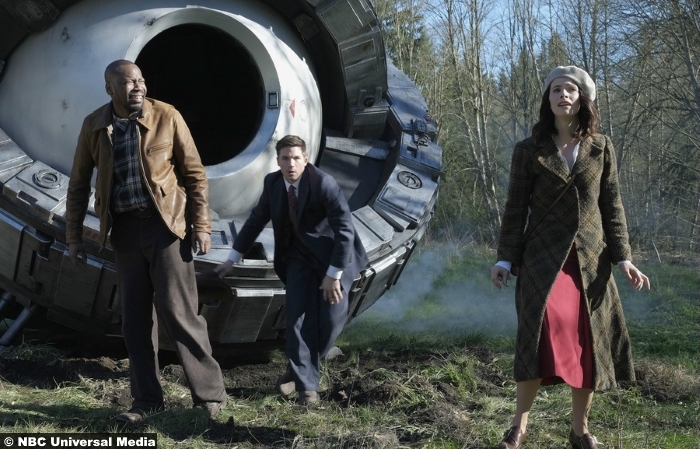 So that’s it, then–we’re going back to when, exactly? May 6, 1937. If that date doesn’t ring a bell, perhaps the words “Oh, the humanity!” will. (If you’re still in the dark, bless your heart. We’re going back to the day of the Hindenburg disaster.) The trio boards the janky-looking time machine, which resembles an eyeball wrapped in tire treads, and lands safely in 1937. When they spot Flynn volunteering as part of the ground crew, they assume he’s there to amplify the original disaster. However, he helps it land safely and so Lucy figures out that his real intention is to destroy the ship on its return trip, when people very important to the future (like Igor Sikorsky and Omar Bradley) will be on board. Our heroes manage to avert that disaster, but I’m sure you’ve figured out by now that the butterfly effect means that the future to which they return will be altered in significant ways.

It’s Lucy who is the first to notice a big change. When she left for the past, her mother, a brilliant historian, was terminally ill. Lucy is shocked to find her mother in good health, but gets an even bigger shock when she asks her mom where Amy, Lucy’s sister, is. In this new future, Amy doesn’t exist.

Lucy barely has time to reel from that, because Homeland Security is back at the door, wanting to come back for another trip. This time, they have to head back to 1865 just ahead of a play at Ford’s Theater. This setting, more than the more modern one of the first episode, allows them to explore certain topics that still resonate today. For example, Rufus is confronted with a group of freedmen who are elated at the prospects of their new lives in Lincoln’s America. Nicholas, one of the men, intends to return to his old master, and set up with him in what certainly will become sharecropping. When Lucy befriends Robert Todd Lincoln, the President’s son, and is asked to be his date to the play, both Rufus and Wyatt urge her to prevent the assassination. She argues that she can’t, because they can’t know what such a huge change in our known history will do to the future. After all, it already disappeared her sister. 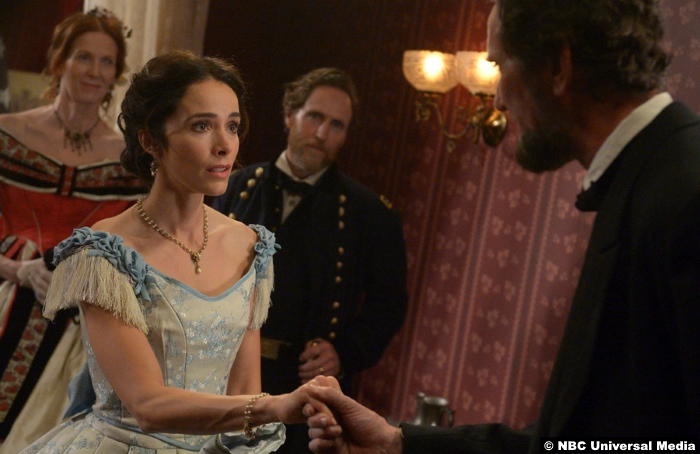 However, when the time comes and Flynn bursts through the curtains (having already dismissed John Wilkes Booth), Lucy can’t help herself. She calls out a warning, which is too late. She has to return to the future with Lincoln’s blood on her dress. Before that, though, she, Wyatt, and Rufus save the other targets of the assassination plot. [History check!: Vice President Andrew Johnson and Secretary of State William Seward were also supposed to be assassinating, crippling the Union. The co-conspirators didn’t pull it off.] And Rufus gets to tell Nicholas some important advice: Get your family and don’t return to the South.

The trio is feeling pretty defeated, though, when they return to the future. Lucy’s still bereft at losing her sister. Jiya, a Mason employee, offered to look into what happened. It turns out that a woman who was supposed to die on the Hindenburg didn’t, so her daughter married Lucy’s father, instead. But why is Lucy still here, then? Because that wasn’t her father. When she returns home, it’s with more questions than answers, but her questions have to be shelved because it’s time for her engagement party. Did I not mention she’s engaged? That’s okay, because it and her fiance are news to her, too.

Lucy has other questions beyond the immediately personal. In both trips to the past, she’s had encounters with Flynn. The first time, he told her that the people she was working for/with are not telling her the complete truth. He tells her to ask about “Rittenhouse,” which she does, but Mason and the agent deny knowing what she’s talking about. We know, from Mason’s conversations with Rufus, that Rittenhouse is a person, but we don’t know more than that. So, who is Rittenhouse? Why is Rufus the only person who could accompany Wyatt and Lucy? Why is Mason having Rufus record them? And what is Flynn’s whole deal? I want to know the answers and you will, too, if you check it out.

8/10 – It may not be for viewers who like their fi heavy on the sci, but if you don’t insist on that, it’s a rollicking good time that may or may not have made me tear up like, five times already. (Lucy and I both were damp-eyed when she was introduced to Lincoln.) You can definitely see Kripke’s influence on the show, even in small moments like when the trio has to give fake names and volunteer things like “Denzel Washington.” That’s a good thing. There are lots of good things about the show. At its heart, it’s a procedural, but it’s a very entertaining one.