We are almost a month removed from the *ahem* successful third installment of the Sharknado series, Sharknado 3: Oh Hell No! In the last few years, I’ve begun to watch many movies in the category of “so bad, it’s good”, particularly monster movies. There are plenty of shark movies out there like Avalanche Sharks and Sand Sharks as well as Sharktopus, all of which I have seen. These are the movies that are great to watch with others either to laugh at the acting, the effects or the ridiculousness of what these monsters are able to achieve. They are all good for a laugh but, for some reason, Sharknado is different. When I saw the first film, I considered it to be the most watchable, intentionally bad movie I had ever seen but why does it stand out? 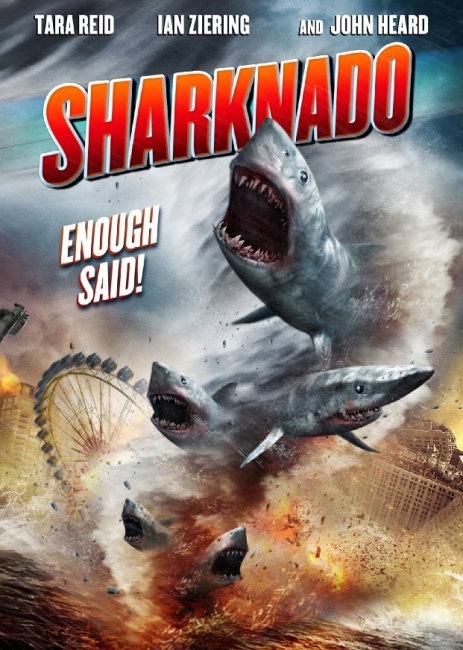 Well, let’s look at the title. It’s called Sharknado, how can that not draw your attention? The other titles of shark films are all ridiculous but ultimately, they consist of sharks swimming in a place they shouldn’t be able to swim or they are some kind of hybrid between a shark and another animal. Whereas Sharknado combines the awesome killing power of sharks with the natural, destructive force of tornadoes. Sharknado at least makes sense….well, kind of. There’s nothing supernatural about the sharks unlike some other bad shark movies.

The first Sharknado film followed a lot of the cliches associated with bad monster movies with deaths to minor characters occurring at the most obvious point perhaps where a character dismisses the idea of a shark falling from the sky only to suffer that fate seconds later. The animations are basic, the camera shots and transitions are clunky and the acting leaves a lot to be desired. All these add up to enjoyable viewing in terms of mocking these traits but Sharknado actually managed to keep my interest throughout. 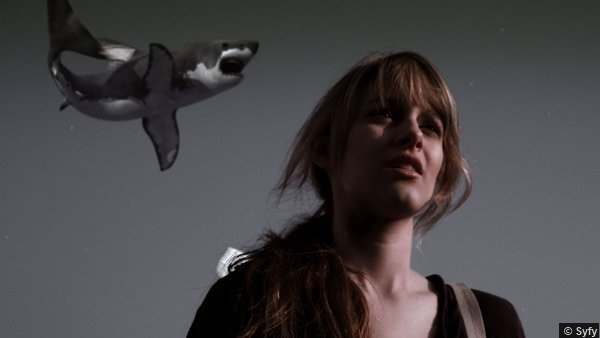 Usually, in these kinds of films, there’s plenty of drivel as part of the dialogue and while you will see a few attacks from the monster, it usually occurs in secluded incidents. Sharknado establishes a group of people early on and while some get lost along the way, the movie actually follows the journey of the group and they actually have a reason to be on the move. In other films, it’s usually a bunch of teenagers just ripping on each other for an hour while a few strangers get killed off until the final showdown. That’s the advantage of a Sharknado, it can follow the main group around and usually means you’re not waiting too long for more airborne shark action. Most of these movies revolve around people on holiday getting caught up in a problem where they must stay put.

As I said, the characters in Sharknado make it a much more watchable movie. The main character Fin (get it?), played by Ian Ziering, is caught up in the storm with his girlfriend Nova along with a couple of other acquaintances. Upon learning about the Sharknado, he decides he needs to help his estranged wife and his daughter to escape. Now, we have the group on a journey and a clear motivation for them to travel. It’s hardly an Oscar-winning plot but at least the actions of the characters make sense. While some films will have fifty minutes of dull dialogue from horny teenagers on holiday only to be killed by some kind of unnatural monster, Sharknado gives the group a clear objective rather than just sitting around and hoping not to die. 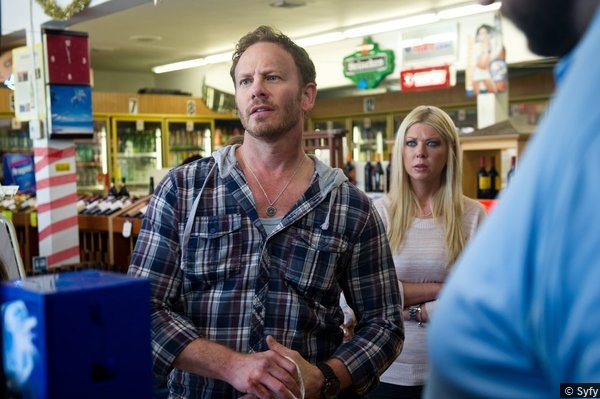 That’s not to say that Sharknado is anywhere near a logical film. There’s plenty of ‘bad monster movie physics’ in the film. One piece of physics that immediately comes to mind is the law that states that if you throw a bomb into a tornado, it will dissipate. Another gem is that you can survive being swallowed whole by a shark.

The appeal of the Sharknado sequels has a lot to do with Ian Ziering. The second Sharknado, aptly named The Second One, followed his character from the end of the first film. In terms of building a Sharknado franchise, it helps that the entire first film didn’t consist of throw-away characters. The continuation of Fin’s story shows that there is actually some thought being put into building him as the main character. The chainsaw has become the iconic weapon of Fin and of the Sharknado series of films. The second and third film are mainly a case of ‘same problem, different city,’ they don’t do much to build on anything from the first film. Instead, the only thing that does build throughout the two films revolve around Fin and his life of dealing with a Sharknado so now we have a cult hero as well as a cult film.

Sharknado stands out from the rest of the monster movies. While people are happy to watch bad monster movies, Sharknado and its sequels created a huge buzz that was incomparable to many other straight-to-television movies. Many celebrities wanted to appear in a cameo role for the Sharknado films because they wanted to be a part of the cult series, not because they were actors desperate for work. The end setting for Sharknado 3 raised the bar in terms of ridiculousness but it was the kind of ridiculous giant leap needed to give us something new and entertaining for the cult following to collectively laugh and enjoy its ludicrous nature. I would say it’s hard to know how to top it but nothing has to make sense. The sky is certainly not the limit.