AND NOW YOUR TNA PRE MORTEM

If you haven’t heard, here’s a condensed version of the past month’s TNA related news:

1. Destination America reportedly is upset at TNA, as the cost to produce Impact is not worth the low ratings it brings in.

2. TNA vehemently denied those rumors and stated they were happy on Destination America and on Thursday nights.

4. TNA reportedly is having payroll issues and many talent (and backstage hands) went weeks without pay.

6. TNA denies those silly rumors. They are perfectly happy and look to continue bringing fans the best wrestling on the market.

7. Destination America announces Ring of Honor will debut this summer on the network, as a lead-in to TNA. The move reminds many of what TNN (later Spike) did with ECW, using the lower-tier promotion as a test to see if wrestling could work on the network before bringing WWF on board. So basically TNA is ECW and Ring of Honor is WWF. Heh. 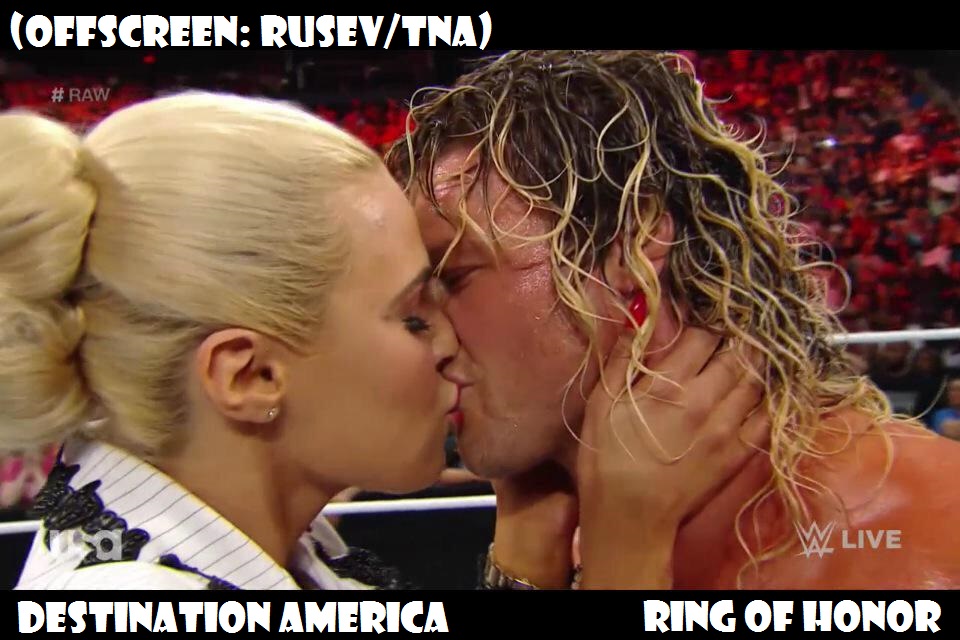 I went on twitter to post something about the latest TNA fiasco, and thought I would be cute and create a #loltna hashtag. Little did I know it was already in steady use.

If you want to know why I’m not all broken up about this, let me give you a few dates to sum up TNA. These ten (approximate) dates are presented in no particular order, and are used to express exactly why the promotion was doomed from the very beginning.

Kurt Angle joins TNA despite serious health concerns (which was the reason he and WWE parted ways). TNA shows no concern for his well-being, books him to the top and gives him a championship run, never discourages his high-risk ring work and keeps him employed beyond multiple drug and alcohol issues. I’ll say more about this later, but TNA always showed a serious lack of concern for the health of its performers. Granted, WWE has a pretty spotty history here too, but at least they have a wellness policy. TNA has nothing.

Ric Flair nearly dies in the ring. The Nature Boy retired with much fanfare at WrestleMania 24, three years prior. He was given one of the most touching tributes in TV history (for real) on Raw the next night. But Flair is a sad man and retirement is not for him. For a time WWE was paying to send him to various events to sign autographs and be an ambassador, but that is not the life of the 16-time World Champ. Now the WWE is basically paying him not to wrestle anymore, but there was a stretch there were he realized WWE would not allow him to compete while under contract with them, so he left for…what’s the opposite of “greener pastures”…”yellower” pastures? Anyway he went to TNA and they were more than happy to send the 60+ year old out there to do whatever he wanted, whether dangerous or not. In a match against old rival Sting, Flair took a nasty top rope bump and ended up with tearing his triceps. For a moment everyone—including the man himself—thought he was having a heart attack. Would that have stopped TNA from using him? There’s no way to know for sure, except for their own track record, which was horrible in that regard.

Hulk Hogan joins TNA after convincing Dixie Carter that he was the real brains behind the success of the WWF and the nWo. His bright ideas included bringing in Eric Bischoff, more spotlight for semi-retired ex-WWF/WCW guys, matches against old rivals Sting and Ric Flair, and going head-to-head with Raw. That last little brainfart occurred on March 8, 2010. TNA broadcast a three hour special on Spike the same time Raw was running it’s regular programming on USA. Bear in mind that Raw was only a two hour show back then, so TNA had an extra hour to play with as a hook to keep viewers (sort of like the old three hour Nitros back when the Monday Night Wars were all but over). In the end TNA scored its usual 1.0 rating and Raw pulled in a 3.6. Nothing much changed but the cost to run live against Raw was killing TNA. After a month on Monday nights, TNA had lost half its audience, pulling in a .05 rating before finally running back to Thursday night. Hogan hung around TNA for a while before finally coming back to WWE. Why? Because WWE needed him for WrestleMania 30. Had they not, he would not have been back. But yeah…he was totally the real genius behind the WWF’s success.

Dixie Carter swoops in. Jeff Jarrett created TNA because what the heck else would Jeff Jarrett do with his life? Sell vacuum cleaners? He’ll never work for WWE again, due to the fact that he held up Vince McMahon for money on the night of a PPV. Now sure, you say, so did Ultimate Warrior and he eventually made his way “home.” But Warrior was an icon and a legit Hall of Famer. Jeff Jarrett is not. He is a midcarder, who only mainevented in WCW when the company was halfway to the bottom of the ocean, and of course mainevented TNA…the company he owned and created. Jeff Jarrett is like Michael Scott; there’s no limits to the number of wrestling companies he can dream up. Yesterday it was TNA, today it is Global Force Wrestling. Tomorrow it will be Jarrett Wrestling with Friends. Anyone who can come up with such clever names as “Bound for Glory” and “Hard Justice” is clearly a “land on his feet” kind of guy. Except nope. Early into the TNA venture the company was about to go under when Dixie Carter convinced her billionaire daddy to buy the company so she could play boss. Since then she has proven to not only know nothing about wrestling, but she clearly knows nothing about running any business. If I were Jeff Jarrett I wouldn’t trust her with my vacuum cleaner project.

Spike says see ya. Consider this an addendum to the “Dixie Carter is a horrible businesswoman” saga. Destination America is canning TNA this fall because they simply don’t want TNA on their network. Spike, on the other hand, wanted TNA so much they wanted to buy a stake in the company. Dixie, however, refused, so Spike canned them. She had the chance to make a smart business move and chose instead to be stubborn. That led TNA to jump to the only network willing to take them, to the sliced-in-half ratings, to the departing superstars that built the company, and to the dire situation they are now in. Solid movie Dix.

Jeff and Karen Angle fiasco. I’m not really going to go too much into this, but google it. The whole thing was bizarre. It’s not related to the on-screen product and it seemed like all parties tried to keep it out of the backstage environment, but in the end it got out, like these things always do, and it was just another head-shaking moment for a company that seemed entirely off the rails.

Jeff Hardy vs Sting fiasco. This one is just sad. First of all, Jeff Hardy had no business even being in the building by the time the main event happened. A replacement should have been found, an apology given, and a termination handed out. Instead they let a drug-addled man compete in a wrestling ring. Even if it was only a minute long formality, there’s no telling what could have happened, to him, to Sting, to the ref, or worst of all to a fan. He should have been sent home permanently. Instead he took a six month sabbatical and was back working a full-time TNA schedule as soon as he returned. This was a true black mark, as Dixie Carter went on and on about second chances, when the person she was speaking about was on his tenth chance between WWE and TNA. She talked about helping him but really she was only interested in taking advantage of whatever dwindling popularity Jeff still had.

Sting, Joe, Angle, etc, all either leave for WWE and promptly get into the best shape of their lives to impress a real company, or they stay and pine for the call that will save them from the misery. Sting wrestled in a t-shirt toward the end of his TNA run. He was sloppy and out of shape, typically missed basic spots and mostly looked over the hill. He finally signs with WWE and suddenly he’s cutting calories and instagramming washboard abs, doing top rope dives at WrestleMania and looking like he was back on Nitro. Samoa Joe had been phoning it in for years in TNA and even during his brief interlude between his exit from Dixieland and his entrance to NXT he didn’t look great. When word started leaking that he might be joining WWE’s little yellow brand, fans were curious but many of them were noncommittal on their excitement, having seen what Joe had become in the past few years. Then he tweets a picture of himself looking as lean as he has in a decade and suddenly everyone got all excited to see him show up on NXT:Takeover. That’s because when you finally get the call to leave TNA and come to WWE, you find a reason to care again. TNA is loaded with wrestlers who are dying to get the chance to give a crap again. Kurt Angle talks about WWE in radio interviews more than he does TNA, and he’s the TNA champ! I can’t think of a bigger indictment than that.

Vince buys WCW, growing his empire to the size of the sun. Fly too close—try to take them on head-to-head—and you get burned, ala Icarus. Best you can hope for is to be a happy number 2. The day Vince bought WCW he effectively made the WWE the wrestling promotion, with no equal or near-competitor. The circumstances that allowed WCW to even come close to putting Vince out of business are likely never to be repeated. It was a once in a lifetime shot: Ted Turner’s money and Eric Bischoff’s bloodlust had the best chance and they couldn’t do it. If they couldn’t, TNA never stood a chance.

Sure, technically TNA is still “on the air” but the writing is on the wall. Come September it is done. Dixie may put on a brave face now, and she may yet smile for the cameras when Destination America parts ways with them this fall, but it’s hard to imagine any TV network being willing to pick them up. They would have to take a serious reduction in their budget, and they have trouble sustaining a payroll as it is. They can’t afford any of the cheap networks that might take them, and none of the big networks want to work with Dixie Carter.

Close the curtain; the show’s over.

Let’s play them out: