When speaking of years past and present, we often split them into BC (Before Christ) or AD (Anno Domini – in the year of our Lord). For wrestling fans, 2010 may have signalled a need for a brand new designation – WTATNAPBT: when talking about TNA’s problems became tiresome. Now that we’re in WTATNAPBT 1, that problem has become even more worrying for the company and everyone who considers themselves a fan. Whilst critics would once rant and rave for hours on end about what the company was doing wrong and how it should fix itself for the good of the business as a whole, those same people have turned the corner on their not-so-blind TNA rage. Where disappointment became anger, anger has now become apathy.

That’s not a good thing.

No matter what the hardcore Impact fans will tell you until they’re blue in the face, people who rant about TNA don’t want the promotion to fail. Nor are they trapped in some twisted McMahon brainwash. The armchair bookers who complain about what they see (or, in many cases, listen about on Friday morning’s Figure Four Weekly podcast) usually have a genuine interest in seeing a second wrestling company rise from the ashes of World Championship Wrestling and find their heads planted firmly in their hands every time TNA do something stupid. Usually at 9:01pm on a Thursday evening. There is no hidden agenda. No one is rooting for Dixie Carter to drive her Russo 4×4 off a cliff into the fiery explosions of extinction. Wrestling fans can’t afford for another company to take every chance afforded to them and squat all over it. The only people who want TNA to fail are TNA themselves. There’s no other explanation for why they do what they do. 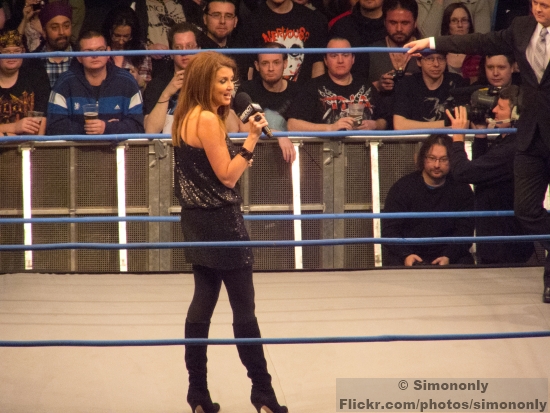 Yet, that anger spurred fans on. Whether in favour of the product or vehemently calling for a change in the hierarchy, message boards lit up with arguments, debates and discussions about what the company was doing and how they could improve. At live events, the audience would make their voices heard if something was deemed too stupid to sit through. Even the wrestlers themselves have taken to interviews and social media to take veiled (or not-so, in some cases) shots at their employers. 2010, with the arrival of Hulk Hogan and Eric Bischoff, quickly abandoned all of the initial promises made, slowly bringing to Earth the sad realisation that things just weren’t going to change. The Monday night “war” became a one-sided destruction. The influx of big-name superstars added nothing more than a debt-inducing salary bill. Pay-per-view buyrates slumped to record-low numbers. House show attendances fluctuated between okay and awful. And then, Spike TV started considering whether Impact was worth the time and money, a consideration that would have killed TNA on the spot, had a move back to Thursday nights not prevailed in the end.

Losing money is a huge issue, but one that Panda Energy – the parent company of TNA – has dealt with since buying the company from Jarrett Sports & Entertainment in late-2002. Paying a premium for top names can be forgiven if the names in question can bring in new fans and revenues as a result. Even house show and pay-per-view numbers aren’t a major concern as the bulk of TNA’s financial gain comes from their television distribution, which is why Spike are of grave importance to the company. Luckily for them, as things currently stand, Spike are happy with the ratings and more than happy to chip in some extra dollars for a name like Sting.

Yet, the real problem doesn’t lie anywhere in those suggestions. The problem, quite simply, is that people just don’t care anymore.

If you look at the big wrestling news sites around the internet, you’ll see less coverage of TNA than there has been in years. The F4W podcasts which were once famed for their outbursts against the product have now become as bored of reviewing the show as most people now seem to be of watching it. Compare the number of discussions on large forums to a year ago, or even two, and the differences are staggering. Noting that buy-rates are now in the four figure range is one thing, but the number of illegal streamers has gone down as well. TNA can’t even give their shows away. Television ratings, bar the three-month stint against Monday Night Raw which ended with losing half the first-run audience, have remained as stagnant as they’ve ever been. There are no new viewers and if there are, they’re only replacing an equal number of fans who have given up. There is no growth. There is no excitement. There is only apathy.

If the numbers on the discussion forums don’t convince you, tune in to an Impact show and take a look at the people standing behind the ring – the live crowd. When TNA moved out of Nashville, Tennessee and headed into Orlando, Florida, it was deemed a breath of fresh air. The audience were better looking, happier to be there, and more appreciative of the in-ring action. If things were to their liking, they’d swing their towels and chant “this is awesome” at everything from an armbar to a moss-covered three-handled family grudunza. If something utterly ridiculous happened, “Fire Russo” would drown out the incessant rambling of Mike Tenay and make everything seem a little more bearable. They were the TNA fans, OUR fans, and they were on our side. Fast-forward to today, and those fans couldn’t care less about anything in that ring. If they do, it’s only after twenty minutes of busting ass before it’s ruined once again by a referee bump or an unnecessary run-in. The Impact fans have seen it all before; they’re not too concerned about seeing it again.

Anyone with a brain could sit down and pinpoint exactly where TNA’s problems lie. It’s always the same list and became passé last year when every man and his dog were fighting an already lost battle: Dixie must go, Russo must go, push Joe, push Beer Money, focus on the X-Division, focus on the Knockouts, do anything as long as it’s different from what is being done right now. After a while, you’re preaching to the choir. Do it too much and you’re a serial TNA hater who grows to despise the sound of his own dreary, whiny voice. Do it too little and you’re missing out on TNA-bashing heaven. Before now, there was no middle ground; you either loved the company and defended its shortcomings to the death, or you hated the company and found yourself with a floor full of ripped out hair and a broken computer keyboard every time you tried to discuss Orlando Jordan. 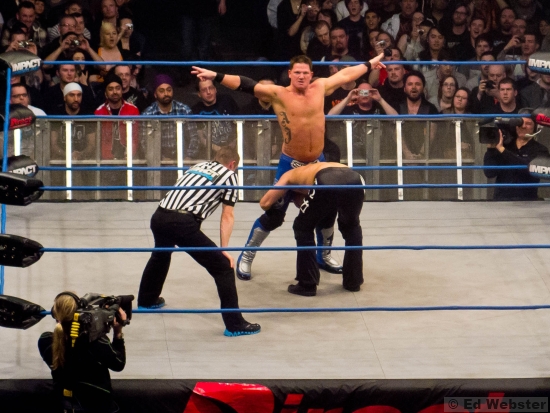 But now, that middle ground has been found, like Ted Dibiase’s level of charisma: pure nothingness. Bischoff wrote a book entitled ‘Cash Equals Controversy’ and everybody knows that all publicity is good publicity, so theoretically TNA have a basis on which to build their product. But it’s long beyond that point now. Nothing TNA do will make a difference, any more. The haters have hated long enough and can’t even bring themselves to bother with the promotion. During the writing of this article, I had to check the ImpactWrestling.com website just to find out who their world champion was because I genuinely didn’t know the answer. Controversy isn’t working. The Jeff Hardy heel turn was a colossal failure, Hogan’s arrival was a short term boost leading into a long-term black hole, and there is now nothing that Russo et al., could do to make me pay even the remotest of attention, short of putting on a string (i.e., longer than two weeks) of strong wrestling shows with good matches and enthralling stories with a beginning, middle and end, mixed with some character development, star building and obvious direction that I, as a viewer, can feel is worth my time. Maybe, they should learn Ring of Honor, but with a budget. And stars. 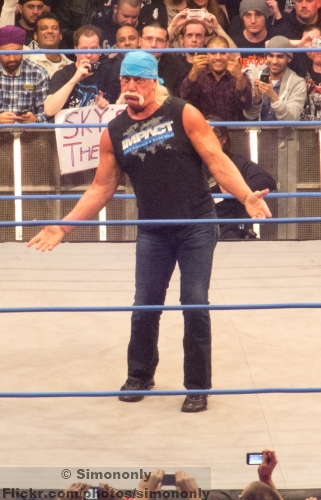 In 2000, a wrestling world without WCW seemed unfathomable. By 2001, it was time to just let it die. TNA had the chance to rectify history, and now seems doomed to repeat it. When TNA dies – if TNA dies, but most likely when TNA dies – we’re back to square one; McMahon is back on top, the WWE will be the only game in town, and many great workers will be without a place to work. We can still hear the sounds of WCW crashing to the ground. Are we about to hear a second scream as TNA falls in the middle of the forest?

Well, that depends: will anyone be left to hear it?