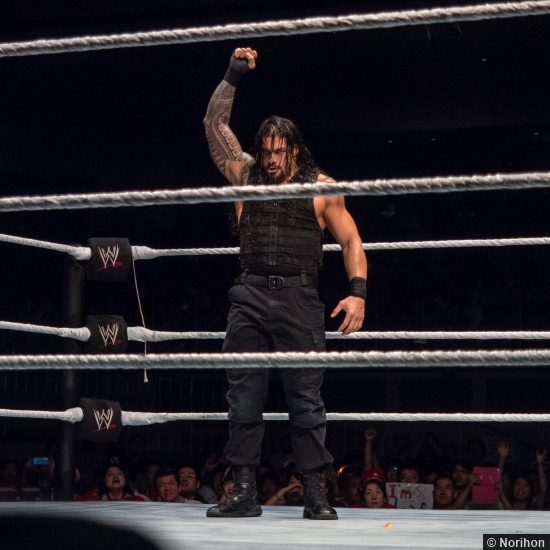 Survival of a Champion.

On a night for revenge, retribution and, yes, payback, the fourth annual WWE Payback came to you, live on the WWE Network, from the Allstate Arena in Chicago, IL. In what started as a friendly rivalry over the WWE World Heavyweight Championship between champion Roman Reigns and #1 Contender AJ Styles has turned personal in recent weeks once AJ Styles’ New Japan running buddies Luke Gallows & Karl Anderson arrived in WWE, immediately targeting Roman Reigns and Roman’s cousins, The Usos. However, “The Phenomenal One” has claimed that he has not been instructing Gallows & Anderson to attack the champion on his behalf, a claim that Roman Reigns does not believe. No matter what Roman believes or what AJ Styles claims, the bottom line is that it will be settled at Payback when Roman Reigns defends the WWE World Heavyweight Championship against AJ Styles, but the question still remains, is AJ Styles telling the truth? Are Luke Gallows & Karl Anderson acting on their own accord? Will Gallows & Anderson play a crucial role in AJ Styles becoming the new WWE World Heavyweight Champion or will Roman Reigns find a way to overcome the looming threat presented by Gallows & Anderson?

Perhaps no rivalry in WWE is more personal and more emotionally charged than the one between former friends Sami Zayn and Kevin Owens. These two Canadian born Superstars were the best of friends for several years before arriving in WWE. Upset over seeing Sami Zayn succeed in WWE before him, Kevin Owens would turn on his best friend when he debuted in NXT, putting Sami on the shelf for a number of months. With Zayn out of the picture, Kevin Owens’ meteoric rise up the ranks of WWE went uncontested, making an impact on the main roster by attacking John Cena last year and it wouldn’t be long before Owens would rack up two impressive reigns as Intercontinental Champion. However, Kevin Owens’ past would come back to haunt him back at the Royal Rumble when Sami Zayn made his surprise return to action, eliminating Owens from the Royal Rumble Match. This trend would continue at WrestleMania when Sami Zayn would take Kevin Owens out in the Intercontinental Championship Ladder Match, paving the way for Owens to lose the title. The self-proclaimed “Prizefighter” would respond by costing Sami Zayn his shot at becoming the #1 Contender for the WWE World Heavyweight Championship. Now, at Payback, these two former best friends will go one-on-one when “The Underdog from the Underground” Sami Zayn collides with Kevin Owens.

While Shane McMahon’s month of running RAW has been met with widespread acclaim from the fans, there has been one Superstar who is not a fan of Shane’s initiative to usher in a “new era” in WWE and that is Chris Jericho. After Shane did away with Jericho’s Highlight Reel in favor of giving Dean Ambrose his own talk show segment, The Ambrose Asylum, “Y2J” has been seething about losing The Highlight Reel and has decided to take his aggression out on Dean Ambrose. However, “The Lunatic Fringe” is never one to back down from a fight and, while he admittedly respects the six-time former World Champion, Ambrose no doubt wants a piece of Chris Jericho and, at Payback, Ambrose will get his chance when Dean Ambrose goes one-on-one with Chris Jericho.

Another part of Shane McMahon’s aforementioned “new era” in WWE has been the introduction of plenty of new faces to the main roster and, as a result, the tag team division has heated up in WWE. Having essentially beaten every main roster tag team in WWE from The Usos to The Dudley Boyz, The New Day were in desperate need of some fresh competition, so a tag team tournament was established to determine the new #1 Contenders for the WWE Tag Team Titles and, from an initial field of eight tag teams, it now comes down to two teams who have never faced The New Day as two of NXT’s most impressive tag teams would make their way through the likes of The Dudley Boyz and The Lucha Dragons to arrive at Payback as the enigmatic tag team of Enzo & Big Cass will square off with the throwback tag team of The Vaudevillains in the Finals of the #1 Contenders’ Tag Team Tournament at Payback with the winning team earning a future shot at The New Day’s WWE Tag Team Championship.

Throughout her relatively short time on the main roster, Charlotte has made it no secret that she believes that she is the greatest thing to happen to the women’s division in WWE history and her belief is backed up by her family, most notably her two-time Hall of Fame father Ric Flair, who has been at his daughter’s side, helping Charlotte become the new Women’s Champion at WrestleMania, not to mention helping Charlotte keep the title. One Superstar who is fed up with seeing Charlotte and Ric Flair’s underhanded tactics is Natalya, who would have had the Women’s Title won a few weeks ago had Ric Flair not pulled the referee out of the ring while Charlotte was tapping out to the Sharpshooter. This all leads to a championship collision at Payback as Charlotte, with Ric Flair in her corner, will defend the Women’s Championship against Natalya and, to make sure that Ric Flair doesn’t cost her the title again, Natalya is bringing her Hall of Fame uncle and longtime rival of Ric Flair’s, Bret “The Hitman” Hart to be in her corner!

For the past month, WWE Chairman Mr. McMahon has allowed his son Shane McMahon to run RAW to much acclaim from the fans, but there was always the lingering reality that Shane’s position of power was only temporary and that point would be driven home this past Monday night on RAW when Stephanie McMahon would return to RAW to confront her brother. Stephanie would then make the announcement that WWE Chairman Mr. McMahon would make an appearance live at Payback as the Chairman would officially announce which one of his children will be in charge of RAW for the foreseeable future! Will Shane McMahon continue to usher in a “new era” on RAW with the introduction of new faces and fresh matchups or will Stephanie McMahon take back the reigns of RAW and bring The Authority back to power?