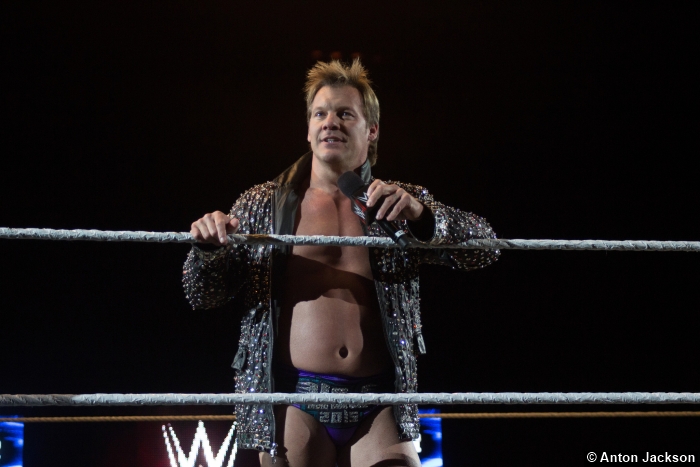 SmackDown kicks off with The Miz in the ring as the self-proclaimed “A-Lister” would host his talk show segment, Miz TV, with his guests, Intercontinental Champion Kevin Owens and the man who sought revenge against Owens on RAW, Sami Zayn. After showing footage from this past Monday night on RAW where Kevin Owens’ former best friend Sami Zayn would save Neville from being powerbombed on the ring apron by the Intercontinental Champion, The Miz would bring out his first of two guests, introducing former NXT Champion Sami Zayn. Sami makes his way to the ring, having a seat with The Miz in the ring before The Miz says that Zayn’s road to WWE has been an interesting one, commenting that it would make a great movie. Sami tries to discuss his journey to WWE, but The Miz cuts him off, trying to direct Sami Zayn’s story. Sami Zayn then discusses his friendship with Kevin Owens, saying that they were best friends for years and he and Owens had more of a “brotherhood” and he was even the best man at Kevin Owens’ wedding. Zayn continues, saying that he debuted in NXT a couple of years before Kevin Owens did and, on the night he won the NXT Championship, Kevin Owens attacked him, powerbombed him on the ring apron, and caused a lot of the injuries that would lead to Zayn being out of action with a shoulder injury. Sami then says that the most infuriating part is that he still doesn’t completely understand why Kevin Owens attacked him.

However, Owens’ exit is blocked by Neville as “The Man That Gravity Forgot” makes his way out to the stage, telling Kevin Owens that they have some “unfinished business”. Neville then says that, as far as he’s concerned, the Intercontinental Championship would look great around his waist. The Miz then enters the conversation, saying that Neville and Sami Zayn can’t just walk onto the main roster and demand a shot at the Intercontinental Title, saying that if anyone deserves a title shot, it’s him. The Miz then says that he is a five-time former Intercontinental Champion and he was in the main event of WrestleMania while they were still main eventing “bingo halls”. Sami Zayn responds by telling The Miz that his days of main eventing WrestleMania are far behind him and this prompts The Miz to attack Zayn from behind, sparking a brief brawl between the two before The Miz makes a quick escape from the ring.

The opening match of the night would then see Sami Zayn team up with “The Man That Gravity Forgot” Neville to face The Miz and Intercontinental Champion Kevin Owens in tag team action. During the match, Kevin Owens would get tagged into the match, but when faced with competing against Sami Zayn, Owens would immediately tag The Miz back in before dropping off of the ring apron and abandoning his tag team partner. The Intercontinental Champion then looks on from the stage as Sami Zayn hits The Miz with the Helluva Kick, pinning The Miz to pick up the win for himself and Neville.

After Lana cost her a match against Summer Rae on RAW, Brie Bella would be looking to avenge her loss as Brie would go one-on-one with Summer Rae on SmackDown with Lana a guest on commentary. In the end, it was Brie Bella utilizing her husband Daniel Bryan’s submission move, the Yes Lock, to make Summer Rae tap out to pick up the win. After the match, Lana would mock Brie with “yes” chants and Brie would send a message to Lana by delivering a running knee to the face of Summer Rae, but when Brie turns around, Lana attacks, again planting Brie with a Bella Buster in the middle of the ring. Lana then mocks Brie with more “yes” chants before exiting the ring, leaving a downed Brie and a confused Summer Rae in the ring.

Following his surprising betrayal of his tag team partner AJ Styles on RAW, Chris Jericho would make an appearance on SmackDown as “Y2J” would make his way to the ring with a “Y2AJ” t-shirt in hand to explain his actions. Chris Jericho says that the fans chose AJ Styles over him and the fans chants of “AJ Styles” made him feel like “garbage”, saying that he is the “best in the world” at what he does, saying that he is a six-time former World Champion and that, in seventeen years in WWE, he has never been injured. Jericho continues, saying that he was too busy winning championships to get hurt, but the fans still chant for AJ Styles, telling the Styles supporters that they can “go to hell”.

Jericho then says that he has delivered countless classic matches in his WWE career and the fans still choose AJ Styles over him, saying that he’s seen guys come to WWE and everyone talks about how that competitor is going to be a World Champion, but then a few months later, they disappear because they can’t “excel” in WWE like Chris Jericho can. Jericho says that he is not the “next big thing” in WWE, he’s the “only thing” and he’s the “best in the world” at what he does, not AJ Styles. Jericho continues, saying that AJ Styles has only been in WWE for a few weeks and they still choose Styles, telling the fans “shame on you”. Jericho then says that he is going to stand by and watch AJ Styles’ WWE career “fade away” because he’s seen it happen before, calling AJ Styles a “bum”.

Then it was time for a big main event as, before he challenges Triple H for the WWE World Heavyweight Champion this Saturday night at WWE Roadblock, “The Lunatic Fringe” Dean Ambrose would team with “The Show Off” Dolph Ziggler and The Usos to face all four members of The Wyatt Family in an 8-Man Tag match. At the end of a wild match, it was Dean Ambrose spiking Erick Rowan with Dirty Deeds, pinning Rowan to pick up the win for his team.