Review: Hail, Caesar! (Would that it twere so simple)

I love the Coen Brothers. I love all of their movies, albeit I love some more than others. Unlike some directors who only seem to have one kind of movie they know how to make, Joel and Ethan Coen are auteurs with the range to direct great slapstick and incredible drama. Their movies seem to fall into one of two categories. Either they are farcical tales with off beat humor and plots that are really “out there” or they are grounded dramas with a slow pace and long considerations of the humans they are filming. The amount of “farce” in their more screwball movies varies, as does the amount of drama in their more grounded films, and sometimes there’s a scene or two in a movie that draws from the other style, but more or less their movies are one or the other.

Fargo has some hardcore moments, but the overall feel of the movie is farcical. A scene featuring a human body being put through a wood chipper can—in another director’s hands—be the dramatic peak of a film. In Fargo it was presented with just enough surrealism that the moment remained screwballish.

The Big Lebowski and O Brother Where Art Thou likewise are manic, surreal movies with insane scenarios and a feeling that no one in the movie is entirely on the level. Everything has a kind of dream like quality to it, similar to the way Wes Anderson crafts his off-kilter masterpieces.

No Country for Old Men was not their first foray into traditional drama, but it is one of their best (and my personal favorite movie of theirs). The duo that made Fargo seemed to grow up with this movie as they moved away from the screwball scenarios and focused more on the individual performances (especially of Tommy Lee Jones and Josh Brolin). True Grit and Inside Llewyn Davis likewise were hard dramatic movies with strong lead performances carrying the pictures (by Jeff Bridges in the former and Oscar Isaac in the latter). Those movies showed that the Coens belonged in the conversation of best filmmakers of their generation.

In between they did Burn After Reading, which had all the screwball farce of Fargo and O Brother Where Art Thou. It wasn’t as weighty a movie as No Country For Old Men or The Man Who Wasn’t There, but it was well made. That’s the one thing you can take away from any Coen brothers movie, whether screwball or serious, the movies are always beautifully shot, meticulously written and tightly edited.

So what the heck happened here? 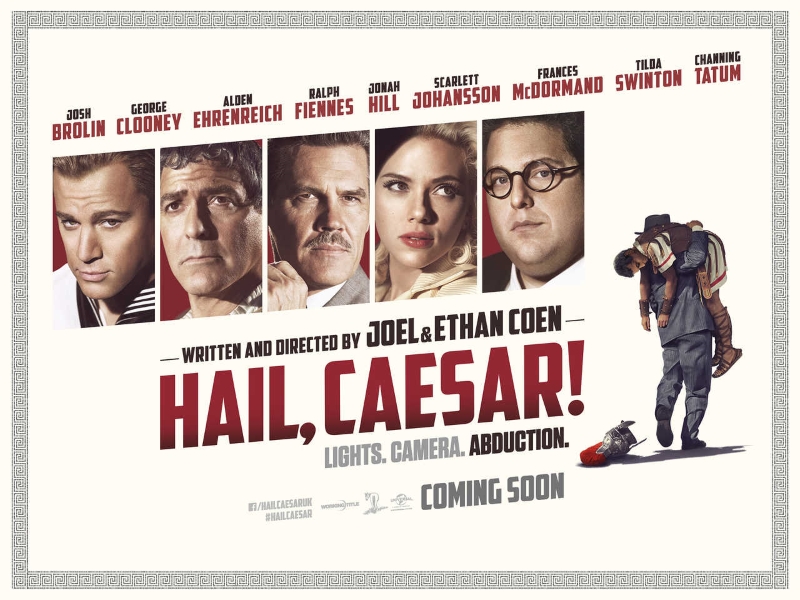 Hail, Caesar! belongs in the farcical category with the same dreamlike zaniness that earlier movies had but with the slower plotting and focus on performances that their dramatic pictures honed in on. The result is a movie at odds with itself. It moves at a snails pace, ruining the handful of brilliant dialogue scenes that are peppered throughout the movie. There are a few moments that stand among the Coens funniest material, but those moments disappear in the void of a bloated story that has too many major players to keep up with.

There are four separate plot lines moving through this picture, and while the editing makes some effort to link the three minor plots to the one major plot, the end result is still a movie that feels like it needed to lose a good twenty minutes of unneeded story, including the entire Scarlett Johansson storyline (despite her giving a great and funny performance). The story involving Ralph Fiennes (who plays Hollywood director Lawrence Laurentz) has some of the most consistently entertaining moments, especially in one scene where he tries to help an out-of-his-league singing cowboy through a dramatic acting performance, but it only serves a minor piece to the overall plot. The other subplot is much more crucial but much less enjoyable to sit through, as Channing Tatum plays a musical actor in a sailor picture. Again, his role is much more important to the main plot of the movie, so it’s a big hindrance to the film that his scenes are a bore. 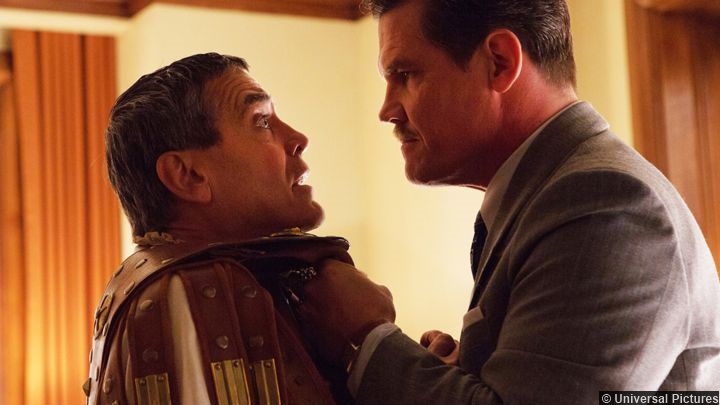 As for the main plot (featuring Josh Brolin playing a Hollywood Producer whose job involves keeping the actors happy and the movies on schedule), it’s not as boring as Tatum’s stuff, and it’s not as delightful as Fiennes’ scenes, but there’s just no energy to any of it. There’s no manic pace that you come to expect from this kind of movie from these filmmakers. Imagine Fargo’s storyline with Inside Llewyn Davis’ pace. It would change the movie entirely. Which is why I was so disappointed with this movie. With a little tighter editing, some fat trimmed and a little more energy in the central story, the movie would have a totally different feel and this review would have been much more positive.

I still love the Coens and I had high hopes for this movie but this was a rare stumble.